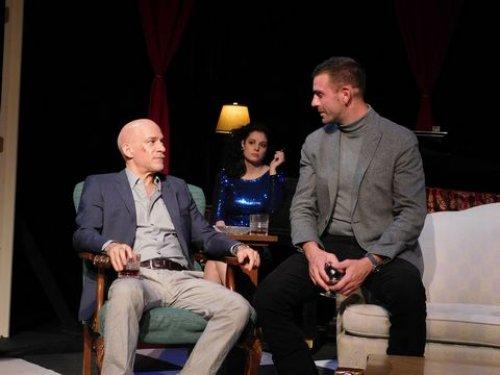 As president of International PEN, the worldwide association of writers, from 1966 – 1969, playwright Arthur Miller moved about Eastern Europe freely and witnessed a great many troubling events concerning writers of all genres. These occurrences led to his writing The Archbishop’s Ceiling, his most political play, which was presented at the Kennedy Center in 1977. Revised after the failure of this production, it had its world premiere at the Cleveland Playhouse in 1984 but was not picked up for a New York production. Since then it has been seen in London at the Royal Shakespeare Company in 1986, Budapest in 1989, Westport, Ct., in 2006 and Denver in 2015. It has finally made it to New York courtesy of Regeneration Theatre in residence at Urban Stages.

The play takes place in some Eastern European bloc country, i.e. a socialist nation behind the Iron Curtain, in the capital of the country. It is described as once the cultural capital of Europe and one hour away from Paris by air (think Prague, Warsaw or Budapest). Set in a former archbishop’s palatial palace now confiscated by the repressive government, famous American novelist Adrian Wallach has returned to visit his friends the writers Marcus and Maya, formerly a couple. Adrian, a lover of Maya in the days when he had lived there, discovers that they have broken up and that Maya is house-sitting as Marcus has gone to London on a literary junket for his latest novel. Maya is no longer writing plays but is hosting a Saturday morning radio program telling amusing but unpolitical anecdotes about life in the city. When asked why he has arrived so suddenly, Adrian claims his reason for the sudden visit was that he has been trying to write a novel about the city but it has been eluding him.

Adrian has heard the rumor that the ceiling is bugged by the secret police and that Marcus is an informant used to trap unsuspecting writers. Maya denies it but when Adrian begins making inflammatory remarks about the government, she takes him into the hallway a distance from the ubiquitous ceiling. Marcus, one of the country’s most commercial writers and favored by the regime, suddenly shows up with Irina, a new girlfriend, a young Danish beauty. He also arrives with Sigmund, the country’s most respected writer who is not allowed to publish due to inflammatory letters condemning the regime that he has been sending to foreign newspapers including the United Nations. 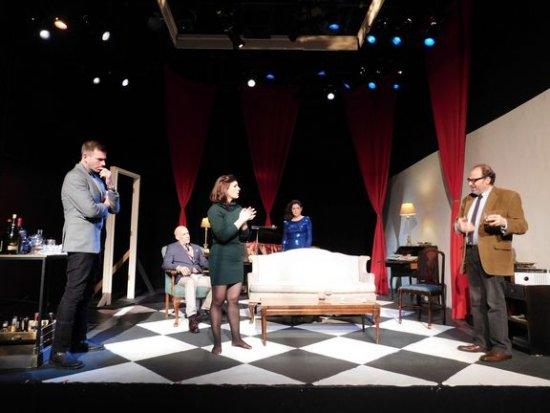 Marcus tells the assembled group that he has returned early from his trip to London as he received a warning from an embassy official that Sigmund is to be arrested and put on trial within the month for slandering the state. As such a trial and the resulting crackdown would be detrimental to the other writers in the country, it is Marcus’ advice that Sigmund, his wife and child leave for America immediately. Adrian and Maya agree with him and when news comes that the manuscript of Sigmund’s unpublished last novel has been confiscated by the secret police from behind his fireplace they all agree there is no time to waste. However, did Adrian’s mentioning it under the archbishop’s ceiling lead the secret police to it? Sigmund puts up a fight saying that he could not write anywhere but where he can hear his native language.

Although Barnaby Edwards’ production is very respectful of the material, it is not very difficult to see why commercial producers were not receptive to this play. The play covers the same material over and over again, whether the ceiling is bugged and whether Sigmund should leave the country. We never know for certain if the secret police are listening in but that may be the point – people living in repressive regimes never know what has caught the authority’s attention. Is Marcus working for them? He might and then again he might not. We also never know if the presence of the famous American writer has changed the outcome of events. The role of Irina is so weakly drawn that her presence seems unaccountable.

The other problem with Edwards’ production is that the ages of the characters do not seem to have been worked out very well. The script describes Sigmund as seven or eight years younger than Marcus which would make him 50. However, Michael Meth as Sigmund looks to be a good deal older than Jon Spano who plays Marcus. Adrian says he was in the American Army in the 1950’s but as Levi Morger looks to be in his early 30’s and as the play is set around 1975 he couldn’t be old enough. 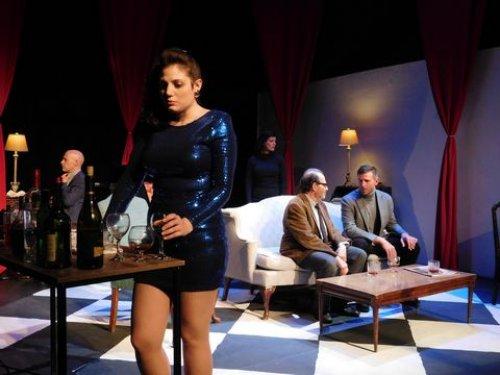 Morger seems rather callow to be a world famous American writer, while it is difficult to figure out how old Kristen Gehling’s Maya is supposed be although she gives a fine impassioned performance as one who has comes to term with the status quo.  However, she does seem the wrong age to have worked on a literary magazine just after W.W. II in this very room. While Gehling and Meth have noticeable Eastern European accents, that fact that Spano’s Marcus does not seems curious. Only Meth has the gravitas for a world weary writer in an Iron Curtain country and gives the best performance despite that fact that Miller makes him repeat himself continually. Nevertheless, Spano’s very ambiguity when asked direct questions adds to the baroque atmosphere.

While Ryan Goff’s simple living room setting in black and white with long red draperies is attractive and elegant, it makes one fatal mistake. There is no ceiling above the set even though the characters and the audience find themselves continually looking up for clues as to the possible bugging. Domino Mannheim’s lighting is satisfactory but does not add to the atmosphere. The sound design by Allison Hohman is a bit inconsistent as to what can be heard outside of this main room of the residence.

Performed without an intermission, Arthur Miller’s The Archbishop’s Ceiling goes on too long for the few events that take place. The title gives away the play’s one big secret and the other later revelations seem too little and too late when there is much more technologically advanced surveillance available today. As we wake up to reports of hacking on an almost daily basis, the play’s relevance seems to have diminished greatly in the intervening years since it was written. We are no longer as shocked as we might once have been by the news that governments are spying on their citizenry.