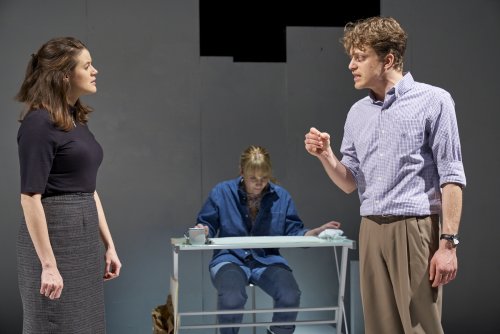 An author can be too close to his or her material so that the real story fails to be revealed. Inspired by his own family events, Buzz McLaughlin’s Sister Calling My Name has a fascinating premise but that is not enough. In relating a faith-based story of Michael, a man who has avoided for 18 years his mentally disabled sister Lindsey, a ward of the state since being a teenager, McLaughlin repeats lines and plot points endlessly while failing to give us enough details to bring the characters to life. The play seems to go round and round in a circle. The script note that Lindsay’s disability manifests itself in simply locking into an idea and going with it until another takes its place does not help an audience who must listen to the same dialogue over and over. Peter Dobbins’ production for Blackfriars Repertory Theatre and The Storm Theatre does little to make the characters more than labels.

Framed as a memory play of events that happened some years ago, Michael (John Marshall) tells us that this is a story of how he and his sister (Gillian Todd) “were reunited after a self-willed separation of nearly eighteen years.” Having a difficult 12 year marriage and separation, and having been denied tenure in the English Department in which he taught, he begins receiving letters and phone calls from a Sister Frances Emmanuel (Susie Dueker), his sister’s overseer at the Sisters of Mercy’s Home for Women, a private institution for the developmentally disabled in Fairmont, Minnesota. 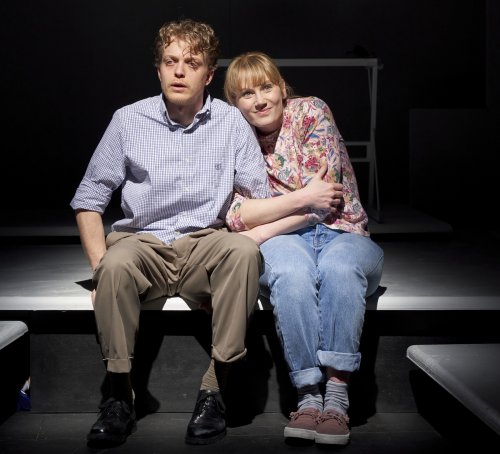 John Marshall and Gillian Todd in a scene from Buzz McLaughlin’s “Sister Calling My Name” at The Sheen Center for Thought & Culture (Photo credit: Michael Abrams)

When he finally answers one of her calls, she explains that a trust fund is being set up in Lindsey’s name for the money from the sale of her art work and that a blood relative is needed as a trustee. Not believing that his sister has become an artist whose work sells, and recognizing Sister Frances as the Anne that he grew up with and had been his girlfriend back in his school days, he decides to make a trip to Minnesota to see her in person. However, he does not plan on seeing his sister as he still has traumatic and unresolved memories of his time with Lindsey when they were children, or even examining her paintings.

The remainder of the play is Michael’s confrontations with Sister Frances in her office as well as flashbacks to his, Lindsey and Anne’s childhood. We also see Sister Frances interacting with Lindsey in the room in which she continues to paint “Beautiful amazing pictures for Michael.” Lindsey’s dialogue is made up of the same sentences over and over again, while Sister Frances insists to Michael that Lindsey’s success at art is a manifestation of God’s will which he denies. We also see Anne with Michael in the days when they were still dating. Although there are a several revelations in the flashbacks, the story has much too little new content for a two act play. And as the characters remain the same throughout, there is little for an audience to follow. 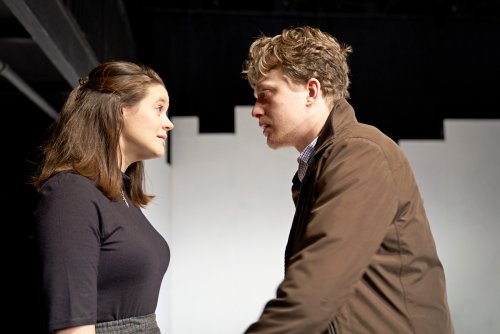 Susie Duecker and John Marshall in a scene from Buzz McLaughlin’s “Sister Calling My Name” at The Sheen Center for Thought & Culture (Photo credit: Michael Abrams)

Under Dobbins’ direction the characters are one dimensional: Marshall’s Michael continues to be angry until the final scene, Todd’s Lindsey remains placid except for outbursts in the flashbacks, and Duecker’s Sister Anne Frances Emmanuel stays cool, calm and collected and will not let Michael make her lose her temper even though he goes out of his way to provoke her. The all-white set by Daniel Prosky doesn’t help as all the locales look the same, while Jake Posner’s bland costumes (which the actors wear throughout) make little contrast against the white walls. The author’s requirement that Lindsey’s paintings are blank pieces of white paper also adds to the blandness of the visual aspect to the show as well as never giving us an idea of how good she is as an artist or how beautiful her paintings are. We hear about how colorful Lindsey’s painting are, but nothing on stage is there to support that vision. The lighting by Michael Abrams is suitable to shift scenes both from Sister Frances’ office to Lindsey’s art room as well as to the various flashbacks in and around Michael and Lindsey’s childhood home but is never atmospheric or moody.

Buzz McLaughlin’s story and characters are potentially interesting but in the form currently presented in Sister Calling My Name, the play seems like a very accomplished first draft. The characters are never fleshed out by the script or the actors and the plot elements are never entirely surprising. Ultimately, the ending is a forgone conclusion. It is possible that another production could get more out of the script but it would mostly like take a good deal of rewriting. Faith-based plays that go on insisting that all is God’s will are not necessarily very convincing without evidence to support this assertion.

The Sheen Center for Thought & Culture, 18 Bleecker Street, in Manhattan