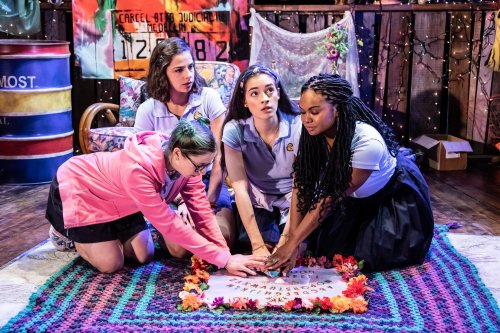 Alexis Scheer’s new play, Our Dear Dead Drug Lord, joins the growing ranks of plays by women about  school girls involved in a joint venture that has special meaning for each of them. This new genre includes Sarah DeLappe’s The Wolves, Claire Barron’s Dance Nation and Jocelyn Bioh’s School Girls; Or, The African Mean Girls Play. These plays tend to have startling and shocking endings, and Our Dear Dead Drug Lord, a co-production of WP Theater (Women’s Project) and Second Stage Theater now at the McGinn-Cazale Theater, is no exception. In Our Dear Dead Drug Lord four teens attempt to become the instruments of their own destiny.

We find ourselves in the palatial tree house of Pipe (Carmen Berkeley), – we never learn her real name – the ambitious, entitled and ruthless daughter of a wealthy Cuban-American couple in Miami in the fall of 2008, as the country is gearing up for the presidential election. Pipe is the current president of her private school’s Dead Leaders Society which has recently been disenfranchised by the school. Originally founded in 1964 to study such figures as John F. Kennedy and Martin Luther King, Jr., it has evolved under Pipe’s leadership to studying Hitler (which is what got them into trouble) and now Pablo Escobar, the Colombian Drug Lord who died on December 2, 1993.

The club’s membership has fallen to three, Jewish American Zoom (Alyssa May Gold), Pipe’s neighbor and the youngest member, and Squeeze (Malika Samuel), Pipe’s best friend, Puerto Rican and Haitian, a drama enthusiast. Fascinated by power and magic, their nicknames have been chosen by using an Ouija board with which they hope to raise the spirit of the dead Escobar. The trouble is that you need four people to hold a séance and they have invited the new Colombian-American student in school (Rebecca Jimenez), cool and self-possessed. They fantasize that she is the daughter of Escobar as her father died when she was a baby, and that may be why they chose Escobar in the first place as their latest study.

During their first séance of the two that we witness, she is given the name of Kit, ironically also the name of Pipe’s dead sister who drowned in their pool while she was supposed to be watching. Aside from boys, school, their own sexuality and their futures, the girls are obsessed with death and trauma. Other than Pipe’s little sister, Squeeze’s father committed suicide, and Kit, who never knew her father, still fears her mother’s ex-boyfriend. Each of them has another reason for wanting to raise the spirit of Pablo Escobar, and the shocking climax of the play is their second attempt to use the Ouija board to raise the dead. The play is very unsettling but it appears to have been headed in this direction all along. 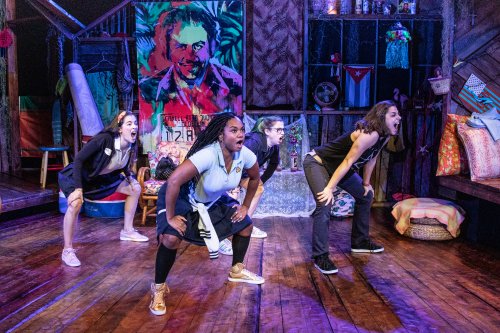 Directed by Whitney White, Scheer’s characters are brilliantly drawn, entirely different from each other. Berkeley’s Pipe is a born leader with fascist leanings and a clear focus on what she wants. Jimenez’s Kit is both seductive and inscrutable, a magnet for others. Samuel’s Squeeze is the most down-to-earth, pragmatic and reasonable of the four. Gold’s Zoom is the most immature, fearful and ultimately amusing for the mistakes that she makes. While the play covers four Tuesday meetings from September to December (the anniversary of Escobar’s death), the pace is always swift and engrossing, with the girls sometimes in such a hurry that they speak at the same time.

Yu-Hsuan Chen’s set (with Karin White’s props) is so detailed that it offers a good deal to look at including a huge poster of Escobar and Christmas lights left over from years ago. The costumes by Andy Jean define the characters as private school girls, but each is given something to express her personality. Lucrecia Briceno’s lighting and Fan Zhang’s sound are not afraid to enter the eerie and supernatural when the girls are fooling around with the Ouija board. As fight and intimacy director, Judi Lewis Ockler leaves little to the imagination. One word of warning, the final scene includes a good deal of Spanish, impenetrable to those who don’t know the language. However, printed translations are provided at the end of the play 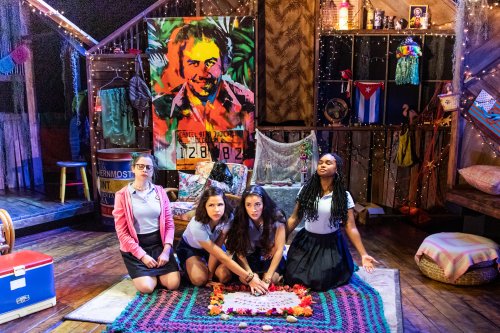 While Alexis Scheer’s Our Dear Dead Drug Lord may get a little carried away with its conceit, it is the work of a born playwright and a unique new voice. This world premiere play is also very revealing of what girls talk and fantasize about when they are alone. Her ear for dialogue is so authentic that you may feel that you are eavesdropping on private conversations, particularly as White has staged the play. As a story of female empowerment, it is both scary and revealing. However, the play is not for the faint of heart, but then millennials appear to want to be astonished by what they see and this play should fill the bill. The rest of us get to listen in on what the younger generation is thinking and feeling.