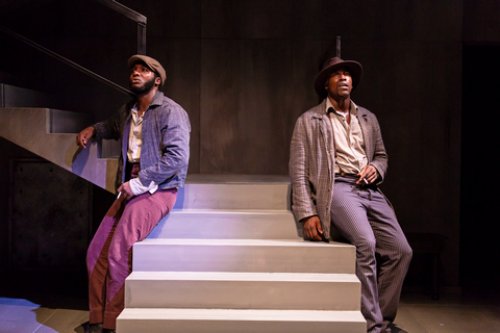 Nambi E. Kelley’s adaptation of Richard Wright’s controversial and critically acclaimed novel, Native Son, first published in 1940, is an ambitious work for the stage – but in an expressionistic format all her own. The New York premiere of this new adaptation presented by The Acting Company in repertory with Measure for Measure (anther play about social injustice) is directed by Seret Scott who previously directed the 2014 Chicago world premiere.

Kelley is faithful to the spirit of the novel which tells of institution racism in Chicago’s Black Belt in the 1930’s through a few days in the life of an African American youth, 20-year-old Bigger Thomas who has been taught to hate white people by his experiences but hates black people as well for their acceptance of their lot: he would like to be an aviator but is excluded from the training; he can’t live or shop outside of the black ghetto due to Chicago’s strict racial taboos; he has no education as he dropped out of school in 8th grade; and has already been to reform school for stealing a car. However, one problem with the play is that Kelley’s expressionistic style goes counter to Wright’s mainly naturalistic writing.

Described in the script as taking place “a split second inside Bigger’s mind when he runs from the crime, remembers, imagines, two cold snowy winter days in December 1939 and beyond,” Wright’s powerful linear story is told in flashbacks, with five of the nine actors playing more than one role. If one has not previously read the novel, it would be very difficult to put the pieces of this 52-scened play in order. Kelley has also made significant changes to the characters which are even more problematic. 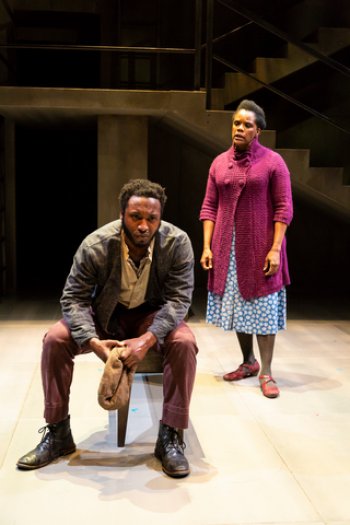 Galen Ryan Kane as Bigger Thomas and Rosalyn Coleman as Mrs. Thomas in in a scene from The Acting Company’s production of “Native Son” (Photo credit: T. Charles Erickson)

The novel begins with Bigger Thomas getting up in the morning in the rat- infested one room apartment he shares with his mother, sister Vera and younger brother Buddy. It is the day he is supposed to go for an interview at the home of the wealthy white Daltons  aranged by a relief agency. Aside from their extensive real estate interests, the Daltons are well known for their philanthropy to African American causes and for hiring troubled youth to work in their home. To kill time before the early evening interview, Bigger meets his gang in the local pool hall, plans a robbery which they do not commit, and  attends a screening of Trader Horn (1931) in which a white girl  has been brought up by a savage tribe in Africa.

Interviewed by the reserved and soft-spoken Mr. Dalton, Bigger meets his blind wife who has no trouble negotiating their home alone and the rambunctious daughter Mary who Bigger saw in the newsreel along with her communist boyfriend Jan, of whom the family disapproves. Bigger’s first job is to drive Mary to a lecture at her university but she tells him to drive elsewhere and pick up her boyfriend, the communist Jan who surprised him by wanting to shake his hand and giving him brochures to read. Jan and Mary want to see a real African American restaurant and Bigger takes them to one he knows where they insist he join them for drinks and a meal; he also sees his girlfriend Bessie there whom he ignores. Mary and Jan make out in the back seat while Bigger drives them around the park.

When Bigger takes Mary home she is so inebriated that he has to carry her to her room, running the risk of waking up the household. Just as soon as he is to leave her mother comes into the room. Bigger attempts to quiet Mary so as not to be found in her bedroom, and using too much force accidentally kills her. After Mrs. Dalton wanders off, he decides to get rid of the body by stuffing it the furnace which he has been taught how to stoke. He visits Bessie and when she worms out of him what has happened, he demands that she help him with a ransom plot. When his crime is discovered as the furnace starts smoking, he and Bessie flee to an abandoned building to avoid arrest. However, he decides he can’t leave her or take her with him. Eventually a massive manhunt for the alleged murderer and rapist is launched and he is captured on a rooftop. Bigger then must deal with prison, his defense and the grief of his family and the Daltons. 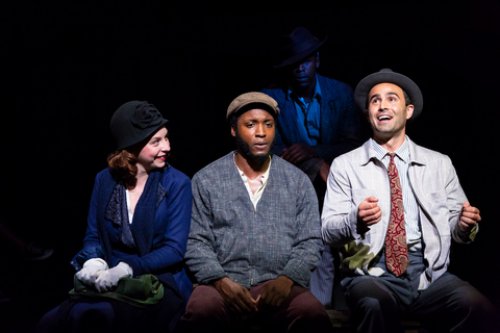 Kelley’s adaptation begins with the murder of Mary which avoids preparing us for the limited life of opportunity that Bigger leads in the Black Belt of Chicago. Told in a fragmentary form often with flashbacks within flashbacks, it is only possible to put the chronology together if one knows the novel. Kelley has also eliminated the powerful speech to the jury by Bigger’s lawyer which is one of the most famous of all statements on social racism and the constricted environmental influences on people living in the ghetto. The play also eliminates Mary’s father Mr. Dalton who in the novel is the one who hires Bigger to be his chauffeur, and assigns many of his lines to his wife instead. Several of the characters have been directed to be cartoonish, Laura Gragtmans’ Mrs. Dalton who seems to be too cheerful, and Mr. Britten (Henry Jenkinson), the private detective hired to find Mary who is so racist that he is not believable even in this context. Mrs. Dalton is not the white, ghostly presence that she is in Wright’s depiction.

A clever device that Kelley has invented is to give Bigger an alter ego, The Black Rat (played by Jason Bowen) who shadows him everywhere he goes. He represents Bigger’s inner voice. Unfortunately, she fails to give The Black Rat much to say or do so that the device is rather moot. Kelley has eliminated Bigger’s gang, giving his brother Buddy many of their lines. In fact, Buddy (Lorenzo Jackson) is much more rebellious here than Bigger, rather than the conventional law-abiding teen, critical of his older brother as he is the novel. We almost expect Buddy to commit a crime, rather than Bigger.

As Bigger Thomas, Galen Ryan Kane is very low key, never showing us the seething confusion inside of this character. Only Rosalyn Coleman as he mother and Katherine Renee Turner as his girlfriend Bessie give the impassioned performances that heat up the play. In addition to getting drunk, Rebekah Brockman’s Mary Dalton is both very flirtatious and sexualized. Unlike Wright’s character she comes on to Bigger and he responds in kind making the charge of rape more plausible than in the novel where he has done nothing more than put his arms around her to keep her from falling while carrying her in her drunken stupor to her bedroom. She also seems older and more experienced, rather than a curious college-age adolescent. 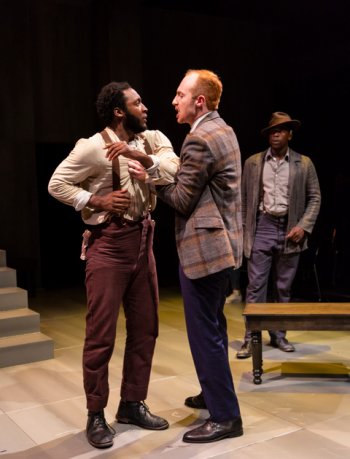 Neil Patel’s unit set with its staircase up the back is as expressionistic as the script but is devoid of atmosphere, despite Alan C. Edwards’ impressive noirish lighting. Sarita Fellows’ rather drab costumes are in keeping with the rest of the physical production. Frederick Kennedy’s original music makes use of a mournful trumpet which sets the tone but does not capture the confusion of Bigger’s inner life. However, his sound design beautifully recreates the sounds of the city.

Nambi E. Kelley’s adaptation of Native Son is an interesting attempt to put a dense and long novel on the stage. However, in stripping the Richard Wright novel down to its basic elements, it eliminates most of the feeling of Chicago in the 1930’s as well as making Bigger a stand-in for all of the disaffected African American youth of his time. Ironically, there is a 1941 version of the play created by Pulitzer Prize winning playwright Paul Green with the help of the author which appeared on Broadway under the direction of Orson Welles. An additional adaptation was written for the Intiman Theatre in Seattle, Washington, in 2006, which is reputedly more faithful to the book than either of these.  Playwright Suzan-Lori Parks has weighed in on the story with her screenplay for the 2019 television movie version which updates the novel to the present. Despite the expressionistic and experimental nature of Kelley’s adaptation which dilutes the novel’s effectiveness, it is a laudable attempt to tell this powerful story of the effects of racism in our own time of the Black Lives Matter movement.