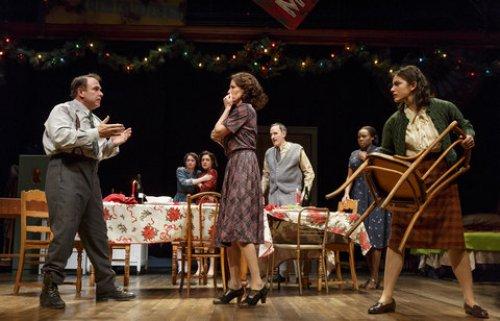 Russian author Anton Chekhov’s Three Sisters has not inspired many plays like his other masterpieces The Cherry Orchard, Uncle Vanya, and The Seagull, but Meghan Kennedy’s Napoli, Brooklyn borrows the device of a trio of siblings who all want to get away.

True, here these Italian American sisters growing up in Park Slope, 1960, don’t want to get to some place as much as get away from someplace else. As they exit their teens, their home has been made a war zone by their brutal and violent Neapolitan father Nic Muscolino who cannot deal with these women (including his Italian born wife) who think for themselves and want to follow different paths than the traditional roles defined for them.

Napoli, Brooklyn, a commission from the Roundabout Theatre Company following their 2013 Underground theater production of Kennedy’s smaller first play Too Much, Too Much, Too Many, is having its world premiere at the Laura Pels in a co-production between Roundabout and Long Wharf Theatre, New Haven. The new play is an old-fashioned kitchen sink melodrama with larger-than-life parents and a strong sense of community. While the first act is too cinematic in its structure, it ends with a historic catastrophe which gives the play – and the audience – a huge jolt. The second act is a more straightforward conventional family drama. 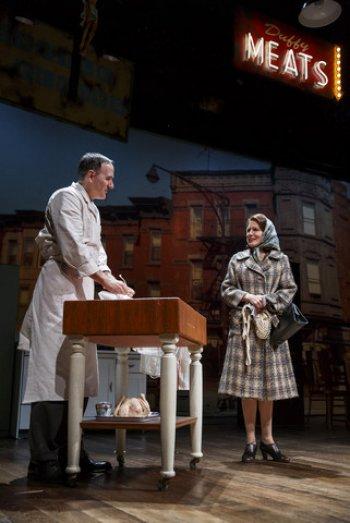 The short scenes each taking place in a different part of Park Slope are part of the problem with the new play. Told in a great many vignettes used to establish various piece of information, the play’s seven sets are all depicted on stage simultaneously. Not only does the stage seem cluttered even in Eugene Lee’s skeletal set design, but Napoli, Brooklyn plays like a movie script and will probably make a much better film. When the second act settles down to a long Christmas dinner bringing together almost all of the characters of the play, it is more successful.

Kennedy also takes on a great many hot button issues of the sixties: women’s liberation, the civil rights movement, gay rights. In addition, she uses a series of symbols (an onion, a clenched fist, a white coat) that don’t entirely ring true. Director Gordon Edelstein, artistic director of the Long Wharf, has brilliantly cast the play so that the daughters and the parents are very well etched.

Jordyn DiNatale plays 16-year-old tomboy Francesca who has discovered her lesbian instincts and is in love with her classmate Connie (a sweet Juliet Brett) with whom she hopes to move to France where no one will know them. Elise Kibler is Vita at 20-years-old, the beautiful middle daughter who has been banished to a convent after attacking her father with a knife after he threatened to kill Francesca for cutting off her hair. Lilli Kay is poignant as the 26-year-old Tina, retiring, illiterate, plain, who her father has sent to work in a factory to help with the family income.

As Ludovica, called Luda, Alyssa Bresnahan creates a strong portrait of a loving matriarch who gives her family great food instead of love and is so passionately devoted to her husband that she won’t stand up to him even for her children. Michael Rispoli has the most difficult role as the angry, confused father who feels he has lost his identify as a stowaway to America while his own family never seems to listen to him, the man of the house. While he gives a credible portrait, he never makes Nic a sympathetic person. 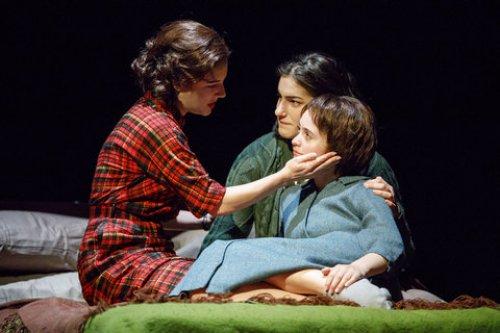 The two other subplots are beautifully and sensitively handled by Erik Lochtefeld and Shirine Babb. As Albert Duffy, the Irish butcher and widower who has long held a torch for Luda, Lochtefeld heartbreakingly underplays this compassionate, understanding gentleman who feels that he has found a soulmate. As the African American Celia, Babb as Vita’s co-worker and first friend, is the only character in the play who appears to be working towards a better life. Also underplaying her role, her Celia is soft-spoken, well-read and an interesting contrast to the tempestuous Muscolino sisters.

Jane Greenwood’s costumes have the authenticity of truth, while the fight direction by Rick Sordelet and Christian Kelly-Sordelet help punctuate the violent actions of the story. Sound designer Fitz Paton and lighting designer Ben Stanton’s work is much in evidence in the neighborhood catastrophe that climaxes the first act.

Meghan Kennedy’s first mainstream play, Napoli, Brooklyn, has a good deal going for it, not the least that it has been partly inspired by the life of the author’s mother. An excellent cast helps disguise the play’s weaknesses while bringing the roles to vibrant life. A working class drama in the tradition of Clifford Odets, Arthur Miller, Arnold Wesker and John Osborne, Napoli, Brooklyn may not be entirely satisfying but it is always engrossing.