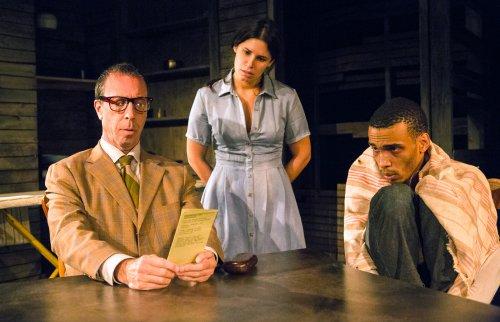 The plays of María Irene Fornés tend to have a strong feminist slant and tell their stories in a surreal or expressionist fashion. Mud, her 1983 play, is having a rare revival by Boundless Theatre Company. This unrelievedly grim tale of rural poverty and toxic affection has been given a realistic production by Elena Araoz which only deals with one level of the play. The dialogue is poetic, controlled and repetitious, endlessly turning back on itself in an attempt to show these lives of quiet desperation. However, in the tiny Teatro Círculo, Regina García’s setting which has the audience practically sitting in the kitchen of a country shack increases the claustrophobia inherent in the script.

Set in an unnamed rural location and an unspecified time,  the play concerns Mae, in her twenties, is attempting to improve her lot through education. When she is not attending school or studying, she works ironing clothes which brings in the only money in the house. She lives with the illiterate and brutal Lloyd with whom she grew up though he is not her brother. Aside from working with the crops and the pigs, Lloyd does not appear to do any work. Currently he has contracted a urinary tract infection which makes sexual relations difficult or impossible but he is afraid to go to the clinic to have it checked out. He claims to have been having relations with the pigs but this may be bravura or a metaphor for the mud in the title.

Mae invites a refined neighbor Henry, an older man, in to help read the booklet she picked up at the clinic to help solve Lloyd’s problem. Eventually she invites Henry to move in with them and into her bed though she appears to be more interested in his ability to help her rise in the world than in any sexual attraction. This leads to a tense love triangle between the characters, Lloyd with whom she may have had a previous sexual relationship resenting Henry’s tossing him out of the only bed in the shack. After Henry becomes incapacitated in an accident and becomes another burden around her neck, Mae realizes that both he and Lloyd are holding her back and she sees only one solution to better herself. 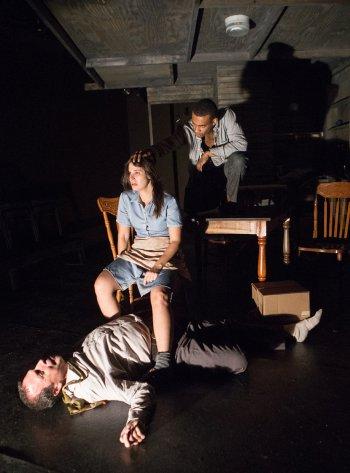 As often in plays by Fornés, there is not much backstory so that either the viewer or the production must fill in the gaps. We never know the exact relationship between Mae and Lloyd although she tells us her father brought him into the family as a child and they grew up together. We don’t know where Henry comes from or what he had done up until he moves in with Mae and Lloyd. We don’t know where Mae is studying that takes illiterate students in their twenties, nor who she works for that provides the clothing and the salary. Either Fornés has deliberately chosen to leave out these facts or the actors are expected to make their own choices.

While the acting is compelling, the threesome does not reveal many layers to their characters; they establish a persona and stick to it, without divulging any further information. As Mae, Nicole Villamil is both stoical and passive, a rather flat reading of this ambitious though down-trodden young woman. Julian Elijah Martinez’s Lloyd definitely comes from the lower depths with his vulgar language, his self-pity and his inability to help himself. However, there is little variety in his performance and we have no idea what his relationship with Mae has been up to this time. He does get noticeable stronger after he begins taking the pills the clinic has prescribed. Unaccountably dressed in a sport jacket and a tie in Sarita Fellows’ costume design, Nelson Avidon’s Henry is the biggest enigma of the three. At first reticent and later lascivious, he tells us little about his attraction to Mae – or where he comes from.

García’s minimalistic kitchen setting surrounded by open wooden slats is both conventional and utilitarian without creating any atmosphere of the characters’ lives. Fellows’ bland costumes for both Mae and Lloyd suggest a grey existence without defining either character. María Cristina Fusté’s dim lighting adds a moodiness not in the rest of the production, while Nathan Leigh’s original music and sound design punctuate the beginning and end of the play’s 17 scenes. While the Boundless Theatre Company revival of Fornes’ Mud offers a credible account of the play, it fails to dig deeper than the surface level for the causes of poverty and lack of education.Mud (through October 29, 2017)