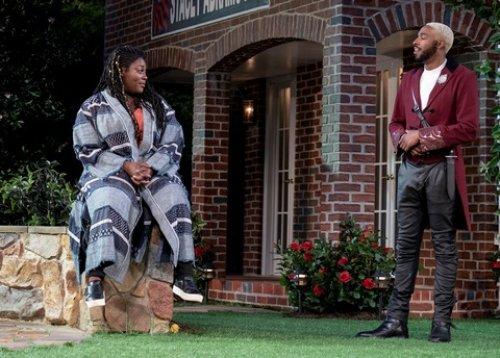 Danielle Brooks and Grantham Coleman in the Free Shakespeare in the Park’s  production of “Much Ado About Nothing” at the Delacorte Theater in Central Park (Photo credit: Joan Marcus)

Director Kenny Leon has made his reputation with trenchant productions of contemporary and new plays by such authors as Lorraine Hansberry, August Wilson, Katori Hall and Lydia R. Diamond. Now with his delightful all-black modern dress version of Much Ado About Nothing at the Delacorte Theater for Free Shakespeare in the Park he demonstrates a light touch with classic plays. Led by Danielle Brooks, star of Orange is the New Black and Tony nominated for her performance as Sofia in the 2015 revival of The Color Purple, the generally youthful cast is up to the requirements of this witty Shakespeare comedy.

Very few modern dress versions of Shakespeare’s plays work (note Sam Gold’s recent controversial King Lear, Hamlet and Othello) but not only has Leon, his cast and production team thought out all of the details, he also has a few novel and entertaining surprises up his sleeve. Set in Messina, Georgia, in 2020 (signs for the campaign of Stacey Abrams dot the stage), the production begins with a terrific, eye-filing set by Beowulf Boritt: a three-story brick mansion with flowers climbing up trellises, Georgia peach trees, an expanse of well-kept green lawn and a stone patio with wrought iron furniture. Among successful modern touches are a huge SUV which delivers the soldiers on stage, selfies for the women, a guitar player for the serenade, and two fine singers for the wedding scene. 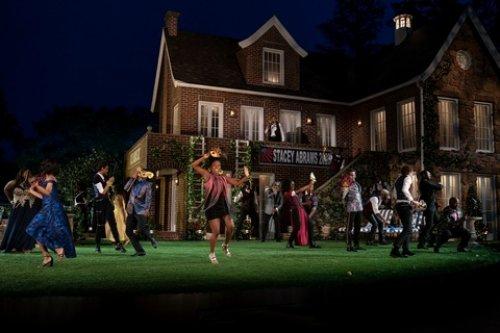 The Company of Free Shakespeare in the Park’s production of “Much Ado About Nothing” at the Delacorte Theater in Central Park (Photo credit: Joan Marcus)

Much Ado is a comedy of the battle of the sexes and in this staging seems extremely up to date, rarely true of contemporary productions of Shakespeare’s comedies. Don Pedro along with his soldiers and companions Benedick and Claudio arrive at the home of Leonato, the governor, who invites them to stay for a month. Claudio immediately falls in love with Hero, Leonato’s only daughter, and she reciprocates just as quickly. We are informed that Beatrice, Leonato’s unmarried niece, has been conducting a “merry war” with confirmed bachelor Benedick, which continues with Benedick proclaiming he is against marriage and Beatrice not interested in losing her freedom to any man.

Not willing to wait a week for the wedding of Hero and Claudio, Don Pedro and his men arrange for Benedick to overhear a conversation in which they discuss Beatrice’s unproclaimed love for him, while Hero and her women friends do the same for Beatrice, with pride being given as the only thing keeping them apart. In the meantime, Don Pedro’s sinister half-brother Don John plots to stop the wedding of Hero and Claudio by having Don Pedro and Claudio see “Hero” have a conversation at her window late at night that purports to show that she is unfaithful. It is actually her lady Margaret and his follower Borachio, both of whom have been bribed to be part of his plot. This throws the wedding into disarray, and causes Beatrice to challenge Benedick to fight for her cousin’s honor. As in the way of comedy, all ends up happily in the end after a great many complications. As Shakespeare himself wrote elsewhere, “The course of true love never did run smooth.” 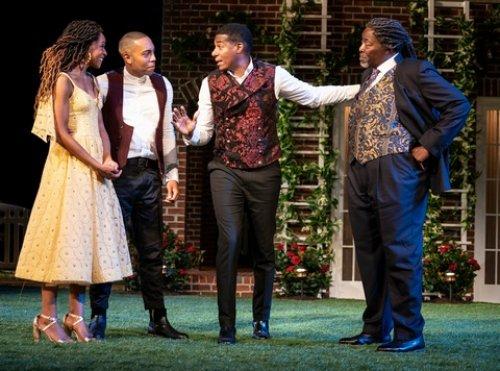 Margaret Odette, Jeremie Harris, Billy Eugene Jones and Chuck Cooper in the Free Shakespeare in the Park’s production of “Much Ado About Nothing” at the Delacorte Theater in Central Park (Photo credit: Joan Marcus)

As Georgia native Brooks has said in interview, this is the first time that both a black woman and a plus-size actress has played Beatrice in Central Park. Her charmingly waspish heroine gets in all of her digs and she makes a formidable presence, while she is appropriately paired with Grantham Coleman (the Off Broadway production of Choir Boy) who plays Benedick as the court jester. Tony Award winner Chuck Cooper brings his authority to the role of Governor Leonato, while Billy Eugene Jones makes Don Pedro an animated, debonair presence.

In the secondary roles that are often throw-away parts, Leon has made each and every character stand out. Margaret Odette is a feisty Hero (usually a shrinking violet) while Jeremie Harris’ Claudio is a swashbuckling lover. As her ladies in waiting, Tiffany Denise Hobbs and Olivia Washington are equally distinct. Tyrone Mitchell Henderson is quite forceful as both Friar Francis and the local Sexton. Assigning the constable with the many malapropisms to a woman, Lateefah Holder makes this role all her own. As Leonato’s brother Antonio, Erik Laray Harvey plays him amusingly as a very old man, belied by his appearance as Dogberry’s assistant Verges. Only Hubert Point-Du Jour as the evil-minded Don John seems lacking as he is so low-key, though the cause of his malice is never truly explained in the play. 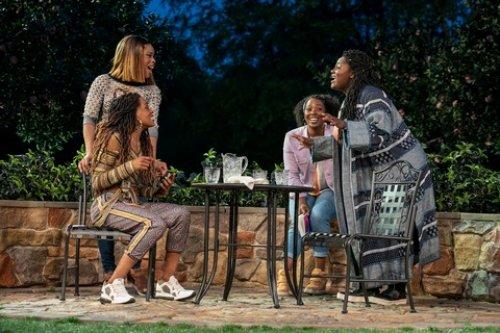 Tiffany Denise Hobbs, Margaret Odette, Olivia Washington and Danielle Brooks in the Free Shakespeare in the Park’s production of “Much Ado About Nothing” at the Delacorte Theater in Central Park (Photo credit: Joan Marcus)

Choreographer Camille A. Brown (Choir Boy) has graced the production with contemporary dances. Costume designer Emilio Sosa has created an attractive and colorful collection of both sportswear and evening clothes. Peter Kaczorowski’s lighting is particularly bright for both the early scenes before the sun sets and the later ones in the darkness of evening. Although some of the early dialogue seems rushed and hard to follow, Jessica Pa’s sound design is a wonder of clarity for the open air theater. Composer Jason Michael Webb is responsible for the pleasant original music heard at various times in the evening. Mia Neal’s wig, hair and makeup give each of the characters a distinguished look from Beatrice’s cornrows to Benedick’s blonde hair and dark beard.

Kenny Leon’s all-black production of this comedy of adult love may not be a first in New York City, but it is a delightfully witty evening in the theater. With hardly a false touch, the production demonstrates the way to update a Shakespeare comedy without sacrificing any of its assets. While the play seems to be trimmed a bit, at two hours and 40 minutes it is certainly long enough to tell its story. Danielle Brooks and Grantham Coleman lead an expert cast of comedians through one of Shakespeare’s sunniest comedies.

Free Shakespeare in the Park

Free tickets distributed at Noon at the Delacorte Box Office to those on prior line, Downtown Distribution Lottery at The Public Theater, 425 Lafayette Street at Astor Place, or by Mobile Ticket Lottery powered by TodayTix at http://www.publictheater.org