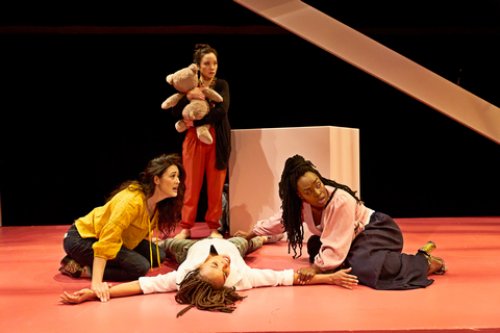 The first act of Anna Moench’s Mothers concludes with a genuine shock as the playwright startlingly upends all of our expectations. Visually punctuated by Wilson Chin’s suddenly not-so-stable set, this audacious turn suggests Moench’s intermittently funny satire of upper middle-class motherhood at a “Gymboree-style playroom” has only been a prelude to something much more challenging and profound. Unfortunately, what you soon begin to suspect is that Moench just ran out of narrative steam and started writing something else.

Except for a few clumsy hints of the more fascinating work on the horizon, Moench’s less-inspired first act is largely a sitcomy take on the type of privileged maternal existence that affords enough free time to obsess about all of your baby’s developmental milestones while also incessantly noticing the nurturing deficiencies of your fellow mothers. Its major weakness is that we’ve mostly seen this story before, though Moench includes a potentially intriguing wrinkle by inverting the racial status quo.

The triumvirate of well-to-do mommies who initially dominate the play is solely comprised of actors of color, which acquires surprising meaning when they start making condescending or outright hostile remarks about “beige” people; one of the moms even sheepishly refers to herself as “an ally.” It’s a clever device that effectively challenges audience assumptions, but Moench never develops this world-building detail into anything more substantial than a few lines of obvious dialogue. 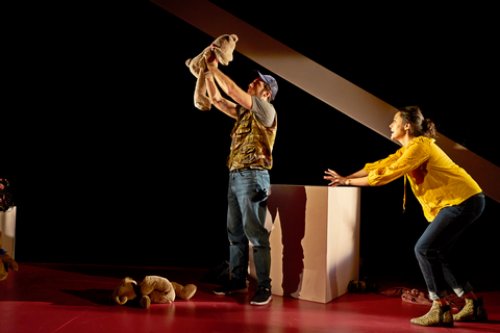 As usual, however, good acting elevates predictable writing, at least to some extent. Particularly riveting is Maechi Aharanwa as Ariana, the triumvirate’s most combative voice, who refuses to accept that anyone’s understanding of motherhood could be different from her own. Although not nearly as strident in her convictions, Ariana’s milquetoast friend Meg (Satomi Blair) is equally certain that the responsibilities of motherhood should take precedence over any other part of a woman’s existence. It’s this shared and fundamental belief that sets the two stay-at-home moms against Meg’s college chum Vick (Jasmine Batchelor), who is visiting from some nameless, much-more-cosmopolitan big city, but not with her baby in tow or any moral sense that leaving him behind in the care of his father could be a crime against the natural order of things.

Vick’s other supposed offenses include continuing to have a career; not switching from breastfeeding to formula after the normal length of time (a dreadful price awaits her in act two for this transgression); failing to satisfy her husband’s sexual needs often enough; and, most upsetting to Ariana and Meg, having doubts about being a mom. While Ariana immediately unloads a passive-aggressive verbal barrage on the mommy apostate, the tension between Meg and Vick builds slower, as they first must come to terms with the sad fact that they’ve grown apart over the years. Once that happens, then they lay into each other. Batchelor and Blair do a nice job of registering the complex emotions of the fraying friendship that Aharanwa’s painfully jealous Ariana is determined to unravel even faster.

Amid all of this motherly tension, a couple of characters mysteriously mill around in the background: Ty (Max Gordon Moore), a “beige” unemployed dad whose seeming equanimity humorously breaks during a disjointed monologue about an age-old, stereotypically male insecurity, and Gladys (Tina Chilip), an immigrant nanny the other women mostly ignore. As the first act winds down, Moench hasn’t paid much attention to Gladys either, which, given her constant, and rather doleful, presence, made me wonder if the playwright was saving the character for some sort of soft-hearted denouement. Boy, did I guess wrong! 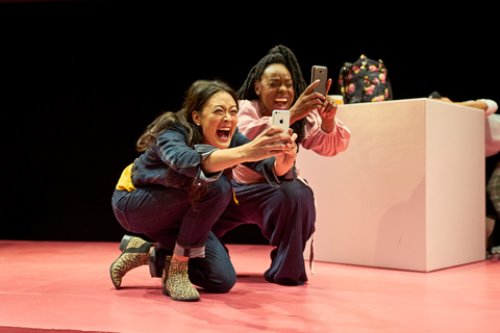 Satomi Blair and Maechi Aharanwa in a scene from Anna Moench’s “Mothers” at the Duke on 42nd Street (Photo credit: Daniel J. Vasquez)

As it happens, Gladys is not there for any purpose the audience can reasonably discern, which is, ultimately, both brilliant and frustrating. Far more active in the second act, she becomes the central figure in a dystopic about-face that finds Ariana, Meg, and Vick plunging down the social ladder, Ty asserting his toxic masculinity with a newfound vengeance, and the rest of the world seemingly on the brink of Armageddon. Taken together, Moench’s second act is intelligent, deeply troubling, and much too tenuously connected to the less interesting play that precedes it.

Rather than trying to hide the seams, director Robert Ross Parker forgoes an intermission and pulls out the staple gun in a futile attempt to force Moench’s disparate acts together. A significant part of Parker’s unresolvable problem is that Moench’s writing just becomes much, much better after things turn drastically bleak, adding to the impression that we’re watching two different plays. And it doesn’t help that Porsche McGovern’s lights and Shane Rettig’s sound also gain greater resonance when underscoring the second act’s increasingly horrific trajectory. It’s as if their creativity couldn’t come until the play was worth the effort.

And that doesn’t happen until Moench’s depiction of motherhood turns abruptly primal, or, to put it another way, when all hell breaks loose. Once that occurs, it’s almost difficult to remember anything that came before, which should be understood as a compliment – and not.

Running time: one hour and  40 minutes with no intermission