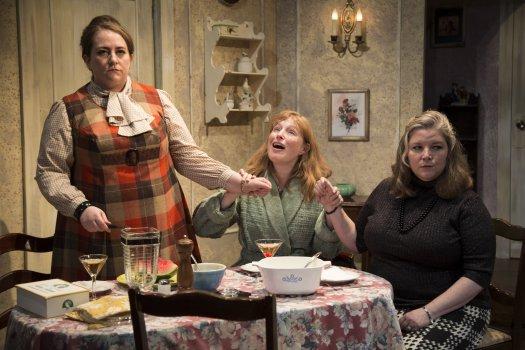 Playwright Paul Zindel is ripe for rediscovery. From the evidence of Shay Gines’ riveting revival of And Miss Reardon Drinks a Little, this tragicomedy now celebrating its 50th anniversary is Zindel’s Three Sisters, Streetcar Named Desire and Who’s Afraid of Virginia Woolf? all rolled into one. The performances in this production are first rate and could not be bettered. Like those earlier plays by Chekhov, Williams and Albee, the ending of Miss Reardon is absolutely shattering.

First staged in 1967 but produced on Broadway in 1972, And Miss Reardon Drinks a Little starred Julie Harris, Estelle Parsons and Nancy Marchand and won a Tony Award for Best Featured Actress in a Play for Rae Allen. However, all of Zindel’s New York premieres read like a who’s who of American stage and screen actresses: aside from Harris, Parsons and Marchand, they included Maureen Stapleton, Florence Stanley, Elizabeth Wilson, Doris Roberts, Eileen Heckart, Rosemary Murphy, Shelley Winters, and Carol Kane. Each of the plays offers at least three juicy roles for women. The theme of Miss Reardon is the psychological damage we do to one another and the play is still shocking after all these years.

Just an ordinary evening at home with the Reardon sisters, Catherine and Anna. However, on this particular night their married sister Ceil, the only one to move out of their childhood home, has asked to come for dinner for the first time in the seven months since they buried their late mother. Apparently neither Catherine nor Anna, teachers at the local Staten Island high school, has been to work for almost a week since Anna’s nervous breakdown in front of her chemistry class. And as a superintendent of schools, Ceil needs to make arrangements for Anna.

More visitors arrive: the superintendent’s wife, and then during dinner their neighbors, the Steins on their way to the theater. Fleur is an acting guidance counselor in the same school and has been asked to deal with the little problem that Anna has created with a male student. She also arrives with a gift from the teachers’ social committee for her. Her real motivation for dropping in at this moment is to meet Ceil (who is her supervisor) to ask for a favor. Unfortunately, she arrives in a huge fur, but as Anna has become a vegetarian since seeing her mother deteriorate and die, she can’t be in the same room with fur. And then husband Bob arrives and spills the beans about Anna’s breakdown. 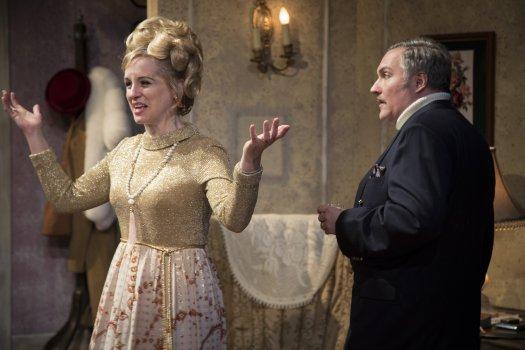 Just like in Chekhov’s Three Sisters a dominating parent has kept two of the sisters from moving on while the third sister has only survived by moving out. Anna may want to live by her own rules but her little episode at school has made that impossible, and Catherine’s solution has been to take to drink while keeping her at home.  Ceil may seem mercenary and uncaring, the Steins may be crass and vulgar, but the real world will intrude no matter how hard the Reardons attempt to keep it out. The glass menagerie that they have worked so hard to maintain is about to come crashing down as the Steins play the truth game and destroy all of their illusions. Mother may be dead but her obsessive paranoid presence is very much alive.

A sort of sequel to Zindel’s Pulitzer Prize-winning The Effect of Gamma Rays on Man-in-the-Moon Marigolds set years later, And Miss Reardon Drinks A Little is by turns hilarious and horrifying. Possessive parents have a lot to answer for, but the choices we make can be equally damaging. The characters are indelibly drawn and the cruelty they invoke against each other is unforgettable. In our era when everything gets said and all boundaries can be crossed, And Miss Reardon Drinks a Little is a startlingly revelatory play.

Gines’ production is not only brilliantly cast but it also moves with the speed of an Acela train. Heather E. Cunningham’s Catherine exhibits a wry humor and a perfect sense of timing as she becomes progressively drunker as well as more scathing in her insults. As Anna, the source of all the latest trouble, Amanda Jones is both perfectly reasonable and totally insane. Sara Thigpen’s married sister Ceil is efficient, professional and forceful and we understand why her character has gone further than her sisters.

As the neighbors with the decidedly New Yawk accents, Rebecca Holt and Christopher Borg almost steal the play right under the noses of the Reardon sisters. Holt’s Fleur is unscrupulous, self-seeking and ruthless. Holt’s performance makes it perfectly clear why the original Fleur won the Tony Award. Borg is like a bull in a china shop, never reading signals or knowing when to stop while both are making the most outrageous faux pas under the circumstances. 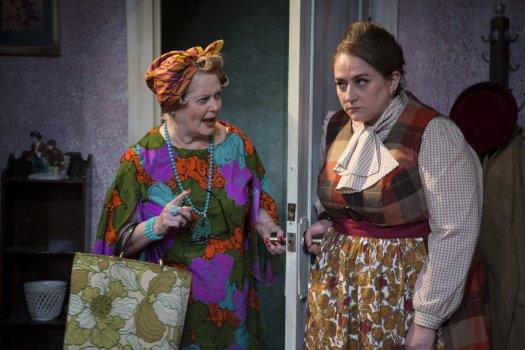 The realistically shabby dining and living room with its slightly old-fashioned furniture in the Jack and Rebecca Cunningham design immediately reveals the lives of its inhabitants. Ben Philipp’s costumes perfectly define the self-image of these various characters, from Catherine’s matronly outfit to Ceil’s business casual to Fleur’s over-the-top evening dress, even for 1967 a bit much for the theater. The lighting by Asa Lipton puts the Reardons under the microscope as it were. The suitably chosen objects around the room which come into play are the provenance of properties designer Sara Slagle.

Retro Productions’  50th anniversary revival of Paul Zindel’s And Miss Reardon Drinks a Little puts the spotlight on an almost forgotten play that is worthy of revival. Shay Gines’ production with a game cast of seven is absorbing and compelling theater with characters that are bigger than life. Paul Zindel’s semi-autobiographical play comes alive in their hands. There may be more theatrical treasures to be mined from his collected plays.