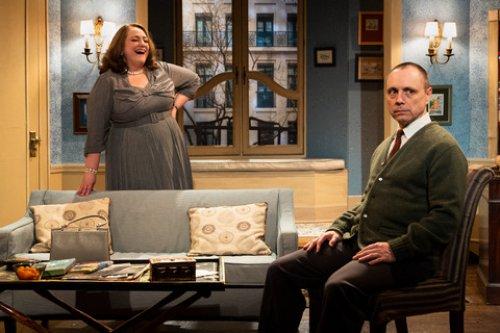 Jean Kerr’s Mary, Mary is the fifth longest running comedy in Broadway history and the longest running play of the 1960’s running 1,572 performances. The 1963 film starred Debbie Reynolds along with Barry Nelson and Michael Rennie who recreated their stage roles. A classic one-set romantic-comedy, they don’t write stage plays like this anymore: probably as the form was killed off by situation comedy on television which has hourly examples of this genre on the small screen nightly.

Although Kerr had ten Broadway productions of plays and musicals from 1946 – 1981 including Jenny Kissed Me, King of Hearts, Goldilocks, Poor Richard, Finishing Touches and Lunch Hour, she is probably best known today for the film version of her book Please Don’t Eat the Daisies and for inspiring the play Critic’s Choice: her husband was famed drama critic Walter Kerr, who, of course, could not review her plays for his newspapers.

Retro Productions which has staged both old and new plays has turned its attention to this unjustly neglected comedy from 1961 which has not had a New York revival that made it into the record books.  Shay Gines’ production proves that it is still witty and literate and has a great many quotable one-liners. A window on the 1960’s, the problem for younger people will be the number of household names that aren’t well-known anymore like Orville Prescott, Elizabeth Arden, Jack Warner, Louella Parsons, Gerold Frank, Jackie Coogan and David Susskind, pioneers who should not have been forgotten. The show program conveniently has a Pop Culture Glossary in the back which explains them all. The problem for older people is that the pacing is a bit slow where it should be played at farce tempo which would make  the repartee all that much more scintillating. 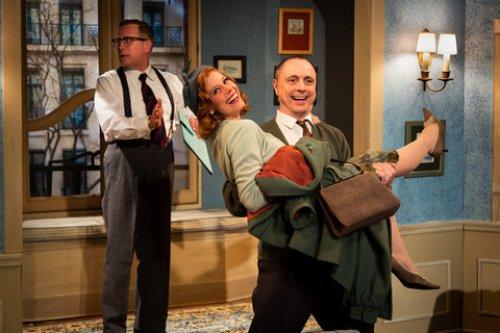 Mary, Mary is an example of a then new genre, the comedy of divorce. Kerr’s characters are very well-drawn, suggesting that they are taken from friends and acquaintances. Highbrow New York book publisher Bob McKellaway and his wife Mary have been separated nine months and their divorce becomes final in two weeks, while she has moved to Philadelphia where she now works as an editor for the Ladies Home Journal. Bob is planning on marrying the beautiful Tiffany Richards, a high maintenance health enthusiast from a wealthy family, just as soon as the divorce comes through. Unfortunately, his tax accountant Oscar Nelson tells him that the deductions taken on his 1961 taxes which are being audited by the IRS need clarification. As Bob can’t recall the reasons for most of the checks including ones that Mary wrote, Oscar has invited her to come up from Philadelphia to help with the paperwork without Bob’s knowledge.

Bob is nervous enough about meeting Mary to ask Oscar not to leave them alone, but she turns out to be equally nervous when she arrives. At first no one recognizes her as she has had a make-over at Elizabeth Arden and has never looked better. However, Mary is still the same woman who can’t resist a witty, judgmental comeback to any opening – which is why Bob divorced her. Tiffany can’t wait to meet Mary in order to know what mistakes to avoid with Bob but he hurries her out of the apartment to avoid their meeting.

He is also expecting his old Navy buddy Dirk Winston, now a fading movie star, to drop by as he has written a memoir that he wants Bob to publish to restart his career. Dirk is immediately smitten with Mary who is so unlike the Hollywood types he usually meets that he invites her out for dinner as they are both single and available. Bob is instantly jealous although he claims he is only protecting Mary. Can he still be in love with Mary even though her sharp tongue keeps getting in the way? This is the story of two people who can’t live with or without each other. 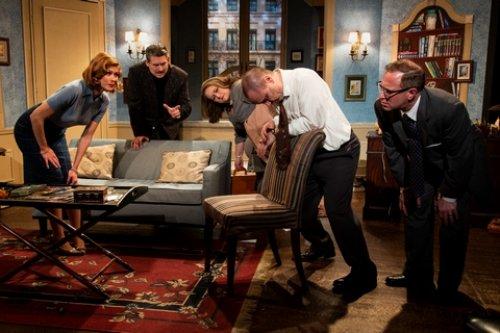 While the production is entertaining and gets most of its laughs, Gines’ casting is rather off-beat using actors who would not have been considered for these roles in 1961 though this is rather a sign of changing times. As the laid-back Mary, Heather E. Cunningham is excellent with both the quick comeback and the humble demeanor. As her soon-to-be ex-husband, Chris Harcum is a bit more neurotic and agitated though certainly he is provoked by events that occur. Robert Franklin Neill is suave and sophisticated as Dirk Winston, the Hollywood movie star. As Tiffany Richards who is ten years younger than Bob, svelte Meghan E. Jones is very amusing due to her seemingly naïve remarks which when explained make perfect sense. Desmond Dutcher’s Oscar is fine at playing referee to the romantically inclined foursome.

The production team is the same group who designed Retro’s exceptional revival of Paul Zindel’s And Miss Reardon Drinks A Little in 2017. The beautiful blue and white living room cum office setting is the work of Jack and Rebecca Cunningham which is period perfect even to showing the view of the apartment buildings across the street. The trompe l’oeil walls are quite amusing and an architectural feat. Ben Philipp’s costumes for three of the cast in gray-green are rather unflattering but they do complement the colors of the set. The lighting by Asa Lipton has the warm brightness of a cozy room you enjoy visiting.

Although nearly forgotten today, Jean Kerr’s Mary, Mary proves to be a clever, droll play with a good deal to say about relationships, marriage and divorce. While life may be more complicated now than it was in 1961, the play is wise to the ways of the human heart. While Gines’ production does not entirely do the play justice, the revival demonstrates that there are 20th century plays by women authors besides Lillian Hellman that deserve a hearing.

Gene Frankel Theatre, 24 Bond Street, between Lafayette and the Bowery, in Manhattan