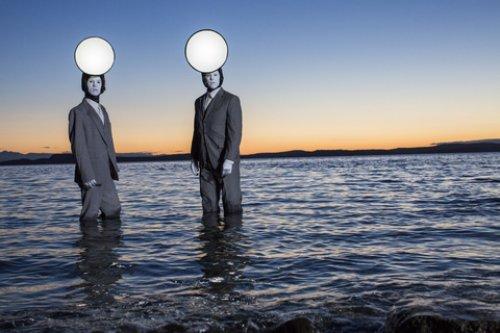 Aaron Malkin and Alastair Knowles in a scene from “James & Jamesy in the Dark” (Photo credit: Thaddeus Hink)

James & Jamesy in the Dark is written by Canadian performance artists Aaron Malkin (“James”), Alastair Knowles (“Jamesy”) and David MacMurray Smith (Director/Co-Writer).  MacMurray Smith, in his overly explanatory program notes uses the word “liminal” so often that I began to believe that the two performers would be consumed in some earthshaking emotional upheaval equivalent to atomic fusion.

Instead, the dedicated actor/mimes took 75 minutes to meet in the dark, speak sentence fragments, use their hands to do the walking and wind up exactly where they began, despite a waltz through the audience which brazenly—and unnecessarily—broke the fourth wall.

The two, clad in identical grey suits, their faces painted grey and wearing helmets to which lampshades styled as lamps were attached (virtually the only source of light for 90 percent of the show) spend long minutes shouting “Ready!” in the dark until they manage to see each other and arrange their two simple wooden chairs—the only set—next to each other.

The action is slow and deliberate.  The lines are simple and border on the absurd. 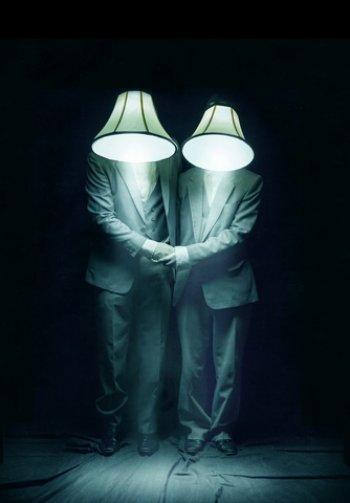 Aaron Malkin and Alastair Knowles in a scene from “James & Jamesy in the Dark” (Photo credit: Thaddeus Hink)

Malkin and Knowles cannot be faulted in their technical virtuosity:  How they move, touch each other, cleverly use the headlamps and coolly enunciate their vague lines. (Everything sounds better in a Canadian-English accent.)

James & Jamesy in the Dark is apparently the product of a long trial and error rehearsal process according to the aforementioned program notes.  The self-involving process, unfortunately, seems to have insulated them from unintentionally synthesizing themes from the works of Samuel Beckett and Eugène Ionesco (isolation, repetition, existential angst).  Their endless wanderings about the stage mirror Waiting for Godot and their nonsensical dialogue could easily have come directly from The Bald Soprano.

More importantly, they display little or no real emotion so it is difficult to empathize with them even when their growing discovery of each other should have stirred the audience.  The closest they come to human contact is placing their two lampshades together and tickling each other with their fingertips.

Even worse, their forays into the audience turn them into supplicants for laughs and applause, turning what is supposed to be an artistic exploration into a circus: this despite MacMurray Smith’s program notes touting the performers’ higher aspirations.