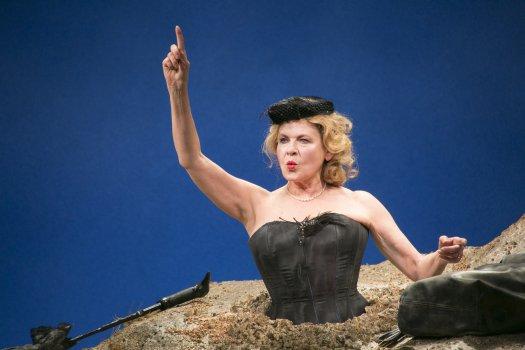 Dianne Wiest in a scene from Act One of the Yale Repertory Theatre’s production of “Happy Days” (Photo credit: Gerry Goodstein)

Often, the first time we see a play, a ballet or hear a musical work it becomes the standard against which all subsequent viewings are measured.  That is the case for me with Happy Days, Samuel Beckett’s grim meditation on life now at the Theatre for a New Audience.  My first Winnie was the luminous, witty Ruth White who ruined me for any other Winnie in the decades between then and now.

All I can say is, move over Ruth White.  Although you haven’t been displaced in my heart and mind, the TFANA’s Winnie, Dianne Wiest, reigns supreme.  Her vivid, varied and touching performance in this endurance test of a play is so rich and ripe with detail that I pity any other actress I see in the part.

The production at the Polonsky Shakespeare Center originated in the Yale Repertory Theatre and we are lucky that TFANA was able to move it to its Brooklyn home.

Ms. Wiest first appears, as anyone who has seen or read this play knows, buried up to her waist in what looks like a giant sand dune, brilliantly designed by Izmir Ickbal.  She is wearing what looks like a strapless black formal gown, at least the top of it, and a tired, but chic, black hat, a touching yet witty design by Alexae Visel whose costume for Winnie’s male counterpart Willie is properly worn out, except for a straw hat that Winnie reprimands him to wear in the sun.  Willie only makes an occasional appearance but is addressed frequently by Winnie. 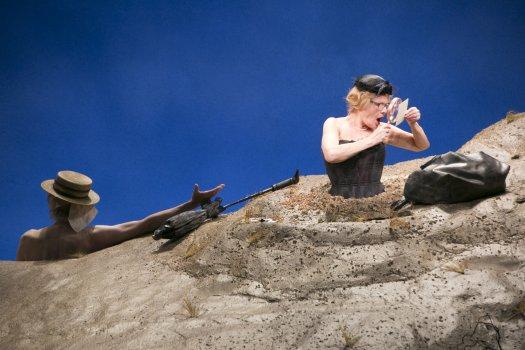 Ms. Wiest has called Happy Days the Hamlet for actresses.  The play might even be more difficult an acting task as the character Hamlet has many people to bounce off while poor Winnie has to make do jabbering away in small talk.  Of course, it really isn’t small talk at all, at least in the hands of Ms. Wiest and her director James Bundy who manage to give what is often a stagnant monologue pacing, color and pathos.

Awakened by an annoying gong, Winnie begins her day with a little prayer and a quick self-examination, judging herself “no better, no worse.”  She calls out to Willie who makes an occasional guttural fuss.   Winnie goes through her very limited toilette rituals, pausing numerous times to wonder about the writing on her toothbrush.  She has memories, puzzles over words (is it hair on your head or hairs on your head?) and even reacts in shock to some French postcards Willie hands her. Such is the daily routine that sustains this lady who cannot explain how she got into this situation. 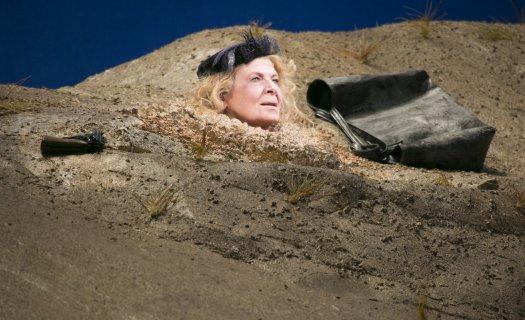 Even worse, in Act Two she is buried up to her neck, her face a mask of fear, her hair and hat askew and her optimistic attitude a pale version of her Act One pronouncements.  Her only hope is to see Willie again.

Is this merely a metaphor for a life sinking into oblivion?  Beckett makes it difficult to decide.  Winnie actually mentions a “coarse” couple who pass her occasionally, commenting on her condition.  So, is she actually buried up to her waist/neck?  Why can’t it be both?  This is Beckett and it isn’t called Theatre of the Absurd for nothing.  Winnie’s odd condition, just like the futile situation of Waiting for Godot’s Estragon and Vladimir, moves us just as it tests us.

At the end of this Happy Days, it’s difficult not to be heartbroken by Ms. Wiest’s Winnie, particularly when she gets a rare glance at her significant other, Willie, who manages to crawl over the sand to serenade her with the “Merry Widow Waltz.” Jarlath Conroy playing Willie makes the most of his few scenes both behind and on top of the sandy mound.  Somehow he even makes something of his slow crawl towards Winnie at the end. Seeing Ms. Wiest’s face at that moment is worth sitting through Beckett’s theatrical obfuscations.

I salute my new Winnie!