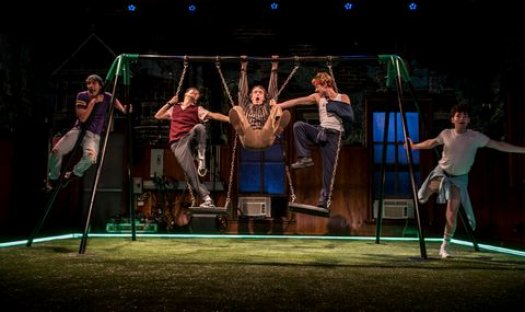 We all recall the moment when our childhood ended and we became adults. For some it was a traumatic experience, a death or an accident; for others just the passing from one school to the next or adolescence into the next stage. Scottish playwright Douglas Maxwell’s international hit, Decky Does a Bronco, now being given its U.S. premiere, is a poignant and ultimately shocking account of how five boys spend the summer of 1983 that comes to represent the end of their innocence. Under the direction of Ethan Nienaber, the five actors are tremendously convincing as four nine-year-olds and one 12-year-old as they spend their time at the swings in Elder Park,  Girvan, south of Glasgow.

Told as a memory play, David (played by Cody Robinson) as an adult narrates his recollections of the summer he has tried not to think about since then. It was the time he and his friends “had grown out of war games and graduated to vandalism” – by which he means broncoing. Broncoing is a rather dangerous sport in which you stand on a park swing making it go higher and higher, then kicking back at the moment you jump off so that the swing and the chains will go over the bar at the top and wrap around. It takes someone tall enough to unwind the chains and get the swing back down again for someone else to use. The mothers considered this vandalism as it needed someone taller to restore the swings for the littler children. The play uses this and a great many Scottish expressions to tell its story.

Daily, as school is out, David meets four friends at the Elder Avenue Swing Park close to his home on the council estate: his older cousin Barry, a biking fiend always trying to break his own record, who is 12 and comes to visit his grandmother every summer from somewhere outside of Glasgow; Chrissy, a feisty fighter always sparring with his best friend Decky who is the smallest of the boys and generally fearful, but makes up for it with bragging and big pronouncements, and O’Neil, a boy of few words, popular and extremely good at sports, who seems more mature than the others; he is already into girls which the others aren’t. 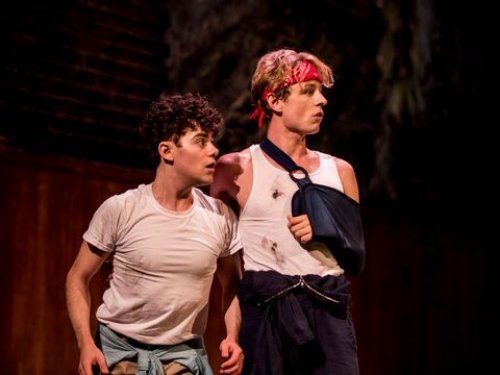 Misha Osherovich and David Gow in a scene from Douglas Maxwell’s “Decky Does a Bronco” (Photo credit: Daniel Davila)

They challenge each other to pranks and diversions, talk of television shows seen the night before, hurl friendly insults, gossip about friends and classmates, speak of their parents and future plans, and generally play a game of one-upmanship as they try to bronco higher and faster each time. The only problem is that diminutive and fearful Decky is unable to bronco and the other boys rib him about this and push him to try again and again with no results. And then one morning one of them is missing and their lives are never the same again.

The thick Scottish accents may be a problem for many Americans as well as the British slang that the boys toss around. However, you get the gist even if some words escape you (i.e. biff, manky, worky, lug, bogie, etc.) And the first half of the play is a bit too long as we see the boys on various days that seem exactly the same as the others – until everything changes and the tension begins to rise. The 2000 and 2010 Scottish productions used a double cast of both men and boys in each role except for the narrator who steps in and out of the action. However, as it is only David we  see in the present, this production wisely uses only one actor to play each character. Nevertheless, the actual production could not be better and the depiction of childhood in its last days of innocence is captured beautifully.

The scenic design by Diggle is pitch perfect: a grass field with a heavy metal playground swing set with three swings surrounded by  graffitied walls in chalk and a suggestion of a few of the houses nearby. Aidan Marshall’s lighting which changes color repeatedly adds to the passing of time and day. The costumes by Susanne Houstle which the actors wear throughout define their personalities: Barry (the oldest to start high school in the fall) in a red vest over a tie and pink striped shirt; Chrissy in a pair of blue overalls which he rolls down to his waist to reveal his white undershirt and a red bandana wrapped around his unruly blonde hair; Decky in a smudged white t-shirt and beige shorts; O’Neil in a purple sports Jersey and torn, over-washed blue jeans, and a blue knit cap; and David (as both boy and man) in a long-sleeve brown and rust colored shirt and tan slacks. 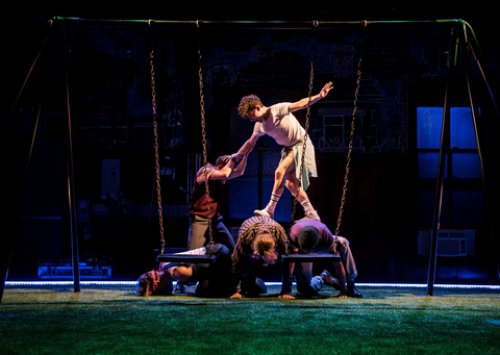 Misha Osherovich supported with his hand on the head of Kennedy Kanagawa and David Gow, Cody Robinson and Graham Baker (on the ground) in a scene from Douglas Maxwell’s “Decky Does a Bronco” (Photo credit: Daniel Davila)

Although the actors are obviously not teenagers, director Nienaber has obtained performances that are totally believable. All exude the physicality of boys on the playground with a tremendous amount of energy to burn off. Cody Robinson as David captures sensitivity and reflection of the adult while his nine-year-old has all the frustration of often being wrong in his information and his beliefs. His revelation of his misplaced guilt at the end of the play is nearly heroic. As Chrissy, David Gow spills over with hyperactive energy as he pugnaciously challenges one and all and fights with Decky continually, but still is a child at heart.

Graham Baker’s O’Neil is the essence of the natural athlete who is cool down to his toes and remains elusive by saying little. His quiet, but swaggering figure implies that he is older than the others, but in fact he is the same age. Misha Osherovich (A Clockwork Orange), shorter than the others, has pegged Decky as a bundle of energy, who makes up in bragging for his lack of height and intellectual simpleness. Although Kennedy Kanagawa’s Barry is three years older than the others, he craves their approval though he has the arrogance of one who senses he is more knowledgeable while at the same time resenting that he has to  play with younger kids. Each registers a different reaction to the tragedy that occurs and that will shape their future lives.

Making its U.S. debut 19 years after its Scottish premiere in an actual park, Douglas Maxwell’s Decky Does a Bronco is a worthy addition to the dramatic literature of plays about childhood and the loss of innocence. Under the direction of Ethan Nienaber, the talented cast of five gives indelible performances which remain with the viewer long after the final curtain. The guilt that the narrator David expresses as to what he might have done differently leaves a poignancy that cuts very deep.