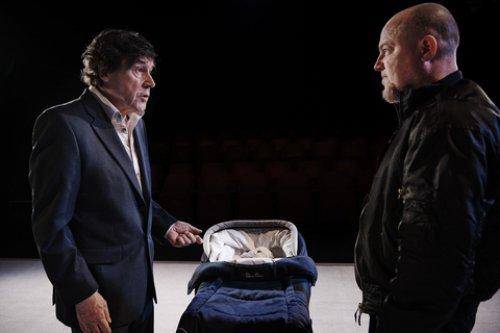 Sixtyish Eric Miller is an angry white man, hating Catholics, Blacks, homosexuals, women, and other groups. He has also become very nationalistic. He not only wants to tell the world, he thinks he should act on it. Middle America in the age of Trump? Actually, the same problem appears to be happening in Northern Ireland according to David Ireland’s dark play, Cyprus Avenue, having its American premiere at the Public Theater courtesy of a co-production by The Abbey Theatre (Dublin) and Royal Court Theatre (London). Problem is for all the sound and fury, Cyprus Avenue, which is a brilliant character study, outlives its welcome long before it is over in this 100 minute play.

Irish film star Stephen Rea, who has previously appeared on the New York stage in three Off Broadway dramas by Sam Shepard, plays Eric in a bravura performance, but the play leaves him mostly on his own. Set in Belfast (where the author is from), Cyprus Avenue is cast in the form of flashbacks with Eric describing to Bridget, his therapist, what has recently led him to this turning point in his life. When he makes a completely unacceptable and shocking racial remark to her (she is black but born in Britain), we are apprised of where he is coming from. In Eric’s story which we see in alternate scenes with his therapy sessions, he is shocked to discover that his daughter Julie’s five week old baby looks like Gerry Adams, until February of 2018 the Leader of the Sinn Féin, the left-wing Irish Catholic Republican party.

The trouble is Eric has developed an extreme hatred of all Irish Catholics. In fact, a Protestant Loyalist, Eric though born in Belfast bristles at the idea that he Irish: “I am anything but Irish. I am British. I am exclusively and non-negotiably British. I am not nor never have been nor never will be Irish.” In order to test his theory, Eric buys a beard of tiny glasses and a black magic marker to draw a beard on his granddaughter.  His shocked wife sends him away where he meet Slim, a Protestant paramilitary terrorist from the Ulster Volunteer Force (UVF), in a park just aching to kill a Fenian (i.e an Irish Catholic). Things go from bad to worse and the final scenes are upsettingly violent. 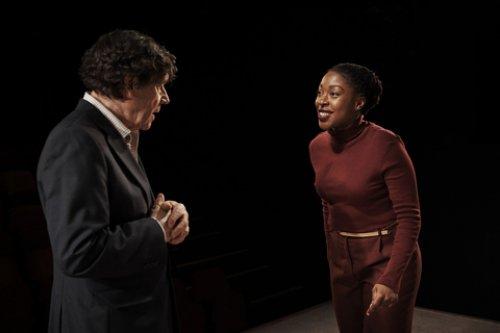 The play has a great many references to Ireland and the Irish (Gary Lincker, Blair Mayne, Lord Kelvin, John McMichael, Michael Stone, Billy Wright as well as Gerry Adams, Siin Féin and the UVF,) all of which mean a great deal more to the Irish than to Americans. It is difficult for most New Yorkers to get worked up over these names even if they do recognize them. Both Eric’s wife Bernie and daughter Julie are surprised to hear of his new hatred for Irish Catholics, and we are never told when it started. He seems to be retired from his job as a minor official working for the British government. Is that when his prejudices date from? We are never told.

While the play revolves almost exclusively around Eric’s feelings that granddaughter Mary-May is Gerry Adams reincarnated, at 100 minutes the play is too long for this one plot strand. The shocking conclusion goes a good deal further than the information given warrants though the play is theatrical in the way that Greek tragedy makes us hold our breath. The title apparently refers to a very upper crust neighborhood of Belfast but other than this Americans will know little about its symbolism other than that it is also the title of Van Morrison song lyric. There is a certain amount of humor but the play includes lengthy rants, absurdist conversations and almost no backstory. What in Eric’s life has made him such a racist and bigot? This is left up to the viewer to ponder. By the time Eric proclaims “Without prejudice we’re nothing! If we don’t discriminate, we don’t survive!,” most viewers will have washed their hands of him as an unregenerate anti-hero. For the play’s ultimate horror, there is no redemption.

Vicky Featherstone, artistic director of the Royal Court Theatre has done excellent work with her actors, but has not been able to get around the play’s deficiencies. Rea’s cool, unemotional performance is one for the books and at times he is entirely alone on stage recounting his story. It is to his artistry that he makes a good deal out of a very one dimensional character, and in the hands of a lesser actor the play would probably be unwatchable As his therapist  Ronke Adékoluejo is equally cool, never losing her composure or her temper despite much provocation from Eric’s extreme views. Chris Corrigan is hilarious as the hot-tempered terrorist who just might be a figure of Eric’s imagination – he does refer to him as “an angel sent from above.” Although Andrea Irvine as Eric’s wife Bernie and Amy Molloy as his daughter Julie are fine, the play doesn’t give them much to do other than react to Eric’s rants and insults. 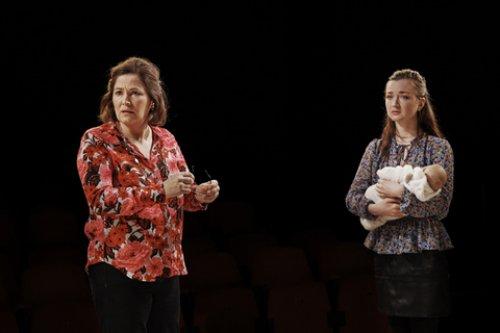 Lizzie Clachan’s setting resembles many others for new plays at The Public Theater in recent years: a large expanse with two pieces of furniture and with the audience seated on opposite sides of the stage. Her costumes suitably place Eric in a conservative suit, Bridget in an all-red dress, the terrorist in all black and Bernie and Julie in attractive daywear. Paul Keogan’s lighting shifts telegraph the scene changes though the set never changes. The humming noises from sound designer David McSeveney seems to presage moments of great tension. Possibly the most important member of the team is Bret Yount whose fight choreography is frighteningly real, almost too shocking to bear.

While David Ireland’s Cyprus Avenue is challenging in its theme and ultimately riveting theater for its excessive violence, most theatergoers will find it upsetting for all the wrong reasons. Similar in its effect to Edward Bond’s controversial Saved from 1965, but while that play attempted to sum up the feelings of a new generation, Cyprus Avenue fails to make a case for Eric’s anger other than as a given. Nevertheless, Stephen Rea gives a performance for the record books as a man boiling over with hatreds and prejudices.