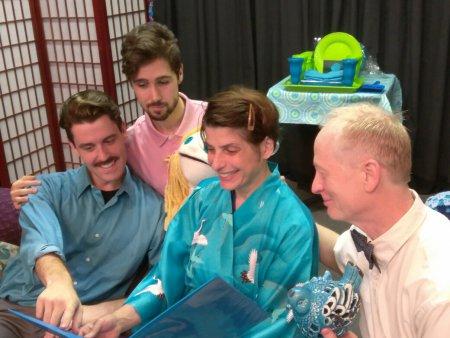 Patrick Thomas McCarthy has earned Outstanding Playwright honors at the Fresh Fruit Festival where his plays PrideRiverCrossing and sExtOrtiOn have premiered.

He has always had a light touch with his characters, never over or under-doing either the comedy or the melodrama, even in the most emotional and revelatory moments.  His Custody is no exception, despite one unrequited relationship, one very happy marriage and one that takes time to find its way.  How this is possible with a cast of just four is part of McCarthy’s magic.

English teacher, Shannon Bryant (Anne Pasquale, dour and passionate in equal measure) has been having a fromance (friendly romance, an original but awkward neologism) with Brendan Barry (Sam Durant Hunter, charming and eager), her gay fellow teacher who has been Shannon’s one-sided object of desire for years.

Shannon and Brendan are first seen in her simply decorated apartment in 1994 on her 41st birthday just before Brendan’s departure for Phoenix to join his significant other Ted (who doesn’t appear until the third scene).  They discuss the custody of their “children,” actually a ceramic bird called Henny and a cloth puppet of a little girl whose limbs are wooden dowels.  She has been dubbed Melly-Lou and she has been diagnosed with Dutch Elm disease—all part of the imaginative scenario assembled over the years by the two “parents.”  The title of the play refers to the quandary of where these kids will reside, a source of friction that is finally resolved.

Shannon has been dating a tech executive, Peter Pine (Keith Herron, who manages to communicate his love for Shannon even when she treats him badly, which she does frequently) who woos her, but instinctively knows that there’s “another man” in the room—Brendan. 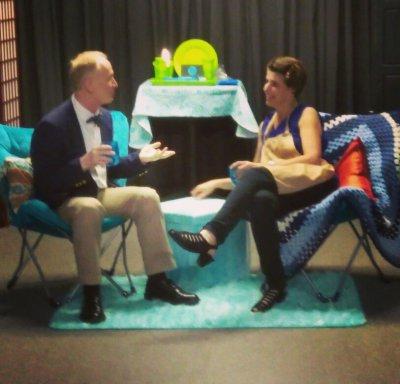 Keith Herron and Anne Pasquale in a scene from “Custody” (Photo credit: ptmc)

As we follow this group over two more years, McCarthy insightfully charts the ups and downs of love and caring and who winds up with the custody of the “children,” even after one is badly wounded (i.e. broken).

As Shannon ages, she makes life changing decisions and, in only two years, grows up, while Ted (a very likeable Drew Bolander) and Brendan’s relationship in far off Phoenix seems to prosper.  Peter’s patience pays off, despite the spirit of Brendan hovering over them, and he makes a place for him in Shannon’s life.

McCarthy lovingly observes all the little rituals of longtime relationships, like the way Brendan always rearranges Shannon’s furniture whenever he pops over.  He gets each character’s inner life with the help of the direction of Patrick Aran who clearly understands every nuance.

Susan Cook does what she can with the odd bits and pieces of furniture she has assembled but does much better with the very telling costumes of each character, from the plain fashions of Shannon to the snazzy, color-coordinated outfits of Brendan.  Although there is no lighting designer credited, the lighting makes the most of the small stage and its nooks and crannies.

Custody is the opening event in the 15th Annual Fresh Fruit Festival.

Running time:  90 minutes with no intermission