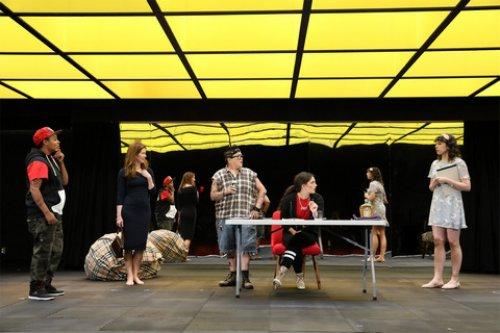 Having seen woefully inadequate productions of Jen Silverman’s The Moors (New York) and The Roommate (San Francisco), I was totally unprepared for her clever, hilarious and unconventional play, Collective Rage: A Play in 5 Betties, in its New York premiere by MCC Theater. Directed by Mike Donahue who has staged at least six of Silverman’s plays up till now, Collective Rage demonstrates Silverman as a unique voice in the American theater. Building on Eve Ensler’s The Vagina Monologues which this play references, Collective Rage tells the story of five very different New York women, all with the same first name, who go on journeys of self-discovery both singularly and collectively.

The actual subtitle of Silverman’s play gives one pause: “In Essence, A Queer and Occasionally Hazardous Exploration; Do You Remember When You Were in Middle School and You Read About Shackleton and How He Explored the Antarctic?; Imagine the Antarctic as Pussy and It’s Sort of Like That.” While this might suggest that the play is overwritten and self-indulgent, it belies the concise, tight writing and structure of Silverman’s comic/angry play which is always surprising, always inventive, always inducing laughter. The play does use Brechtian supertitles to announce the scenes but these are comic and informative, rather than didactic or preachy. 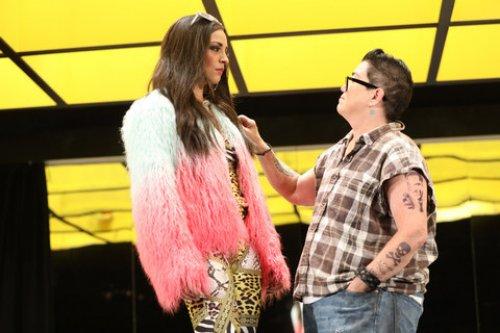 Staged with almost no scenery, the play’s 19 scenes move at a breathtaking speed. In the first four scenes we meet five different Betties: one rich, one lonely, one charismatic, one lovelorn and one who runs a boxing gym and works on her truck. They also include two heterosexual women, two lesbians and one bisexual. Dana Delany is a rich woman whose husband is cheating on her and she is consumed by rage. Adina Verson is a dowdy, lonely, friendless woman whose husband ignores her. Ana Villafañe is a charismatic Latinx woman who is attractive – and attracted – to both sexes and appears to have it all together. Lea DeLaria is described as “having awesome tattoos and is as butch as you can get.” She is in love with Betty 5, played by Chaunté Wayans, who is “Genderqueer” with great tattoos, recently out of rehab and at peace with herself.

Making use of “six degrees of separation” and several dinner parties, the five Betties who have little in common all become friends or frenemies, as the case may be. After Betty 1 takes Betty 3 to see A Midsummer Night’s Dream, Betty 3 decides to stage her own show, a version of Shakespeare’s play-within-a play whose name she can’t quite get right, is it Burmese and Frisbee, or Pyramid and Thirsty, or Pyrex and Tambourine? She casts the other four Betties as the prologue, the moonshine, the wall and the lion, with herself as the star. Timid Betty 2 comes out of her shell as her intern, while Betties 1 and 5 who have previously met at the gym become fascinated by each other. As Betty’s play nears opening night, each woman has a revelation about who she should be and her place in the world.

Under Donahue’s fast-paced direction, the five actresses strut their stuff, giving us a microcosm of contemporary women, each more hilarious than the next in totally different aspects. Delany, the Emmy Award winning actress best known for China Beach and Desperate Housewives, is chic and articulate as the rich Upper East Side woman who has to find some other occupation now that she has caught her husband cheating. Verson, seen in both the Off Broadway and Broadway versions of Paula Vogel’s Indecent is sweet as the lonely woman who is not in touch with her body, particularly having never seen her vagina, and who wishes for a friend.

Villafañe, who originated the role of Gloria Estefan in On Your Feet!, is all rough edges and prickly surfaces as the over-the-top Latinx who gets things done. Star of stage, screen and television, and winner of three Screen Actors Guild Awards for Orange Is the New Black, DeLaria is moody and melancholy as the lovelorn lesbian who can’t get Betty 5 out of her mind. Making her New York stage debut, comedian Wayans, a second generation of the famous family, is low-key and forceful as the genderqueer individual comfortable with both pronouns who is attuned to herself and makes people feel comfortable around her. All the actresses are given moments to shine and make the most of their opportunities. 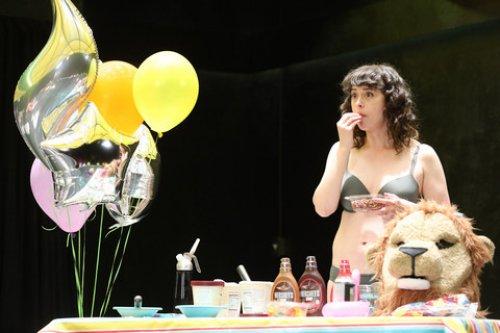 Donahue keeps the pace bubbling along and mines all the humor from Silverman’s droll script. Dane Laffrey’s spare setting for this absurdist/post-modern farce allows for the quick changes between the many scenes, with the props and needed furniture appearing as if by magic. The costumes by Dede Ayite instantly define the women and their disparate lifestyles. Jen Schriever’s lighting is as unobtrusive as possible while making the needed transitions between the scenes. Caite Hevner’s projection design is responsible for the supertitles that punctuate each of Silverman’s scenes and mostly provoke laughter.

In Collective Rage: A Play in 5 Betties, Jen Silverman has taken feminism in the theater to the next level and in doing so she has created a remarkably astute comic play. These women may have choices, but they must find themselves first in order to make use of them. Mike Donahue along with five hugely talented actresses create delicious fun as the play satirizes a great many issues for women today, with feelings we all share. The language and anarchy of Collective Rage may be too liberated for some, but the work is persuasive, original and witty. With this play, Jen Silverman becomes a unique and new voice in the American theater.