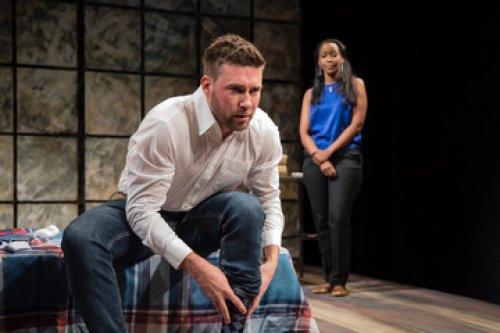 A diverse cast of 15 actors sprints onto the stage of K. Lorrel Manning’s Awake, dismantling the scaffolding of chairs and tables, and setting the stage for the first scene. They take their places in chairs to the left and right of the thrust stage, sitting in rapt attention as the play begins.

Over the course of the next two hours, the actors take turns presenting nine scenes, three of which are monologues and the rest performed in pairs, covering topics from racial division and immigration to police brutality and gun violence.

Just another evening of didactic, heavy-handed theatrical browbeating? Not in the slightest.

The “n-word” is uttered within minutes of the play’s beginning, so casually that a few gasps are elicited from the audience, and all eyes and ears are drawn into an evening of thought-provoking and evocative theater. 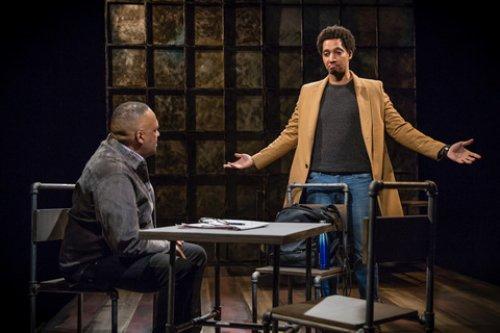 Manning’s direction and script are both expertly crafted. The play’s moral questions are cleverly woven into each of its fully-dimensional characters’ words, and their tales are often presented without bias, leaving the audience to draw its own conclusions. The actors find their full potential in this play, each one as compelling as the next, filling their portrayals with humor, earnestness and passion; they listen to each other in every moment and are a joy to watch.

Comprised solely of stackable chairs and tables, the set design by Chika Shimizu is streamlined, effective, and urban-looking; they appear to be made of steel pipes suggesting skyscrapers and are easily configured within seconds by the actors, then accented by well-chosen props by Addison Heeren. Everett Clark’s costumes perfectly convey the characters’ backgrounds and socioeconomic statuses without drawing unnecessary focus.

Awake is a highly-recommended, vital evening of theater.