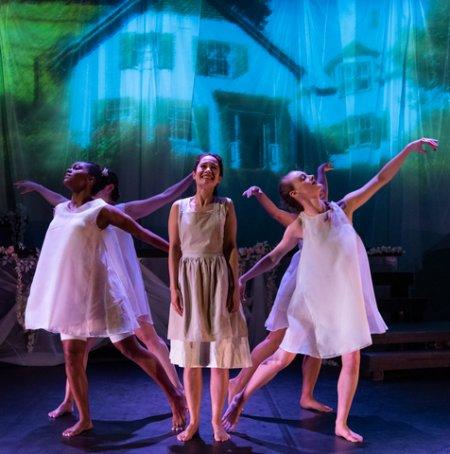 Ali Ewoldt and dancers in a scene from “Anne of Green Gables: Part I” (Photo credit: Russ Rowland)

The goal of Royal Family Productions is to take advantage of all the brilliant resources of the Times Square community including new and established talent in tandem to produce fascinating theater productions.  Their Anne of Green Gables: Part I, based on the beloved novel by Lucy Maud Montgomery as adapted by Chris Henry, has many charms, not the least of which is the luminous Ali Ewoldt in the title role of Anne Shirley. That she plays most of the other characters in this familiar tale is a bonus: more time with Ali Ewoldt.

Directed with touching simplicity by Henry and choreographed with a lyrical flow by Lorna Ventura, this Anne tells the well-known story utilizing a combination of voiceover readings, projections, dance, mime and fine acting.  Henry has turned Anne into a dance play with an original take on this oft-told tale of a spunky, intelligent and witty young lady guarded by a mute Greek chorus of four who reflect and illuminate her inner thoughts and feelings. 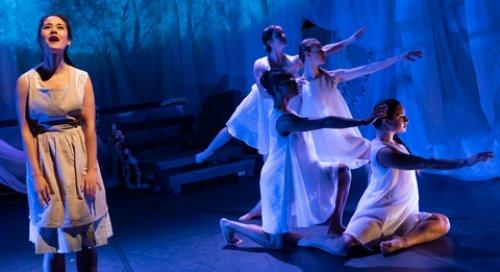 The projections designed by Chelsie McPhilimy give a sense of place as well as actually telling the story and commenting upon it.  Green Gables farm is illustrated as well as various places in Prince Edward Island that are important in the text, a good deal of which is projected, too.

Anne has been adopted by Marilla Cuthbert and her brother Matthew who had expected a boy to help out on their farm on Prince Edward Island.  It is the turn of the twentieth century and Matthew is taken aback by the ebullient, red-haired youngster he has just picked up, a child who gleefully renames the local lake and forest to suit her fanciful flights of thought and who believes that her red hair is a detriment. It does not help her confidence when she overhears Marilla complaining about her not being a boy.  Anne does a dance of despair, supported by her little corps de ballet.

Despite setbacks, Anne does eventually win the Cuthberts over through a series of warmhearted conversations, mostly with Marilla.  Anne also befriends young Diana Barry who becomes her best buddy. 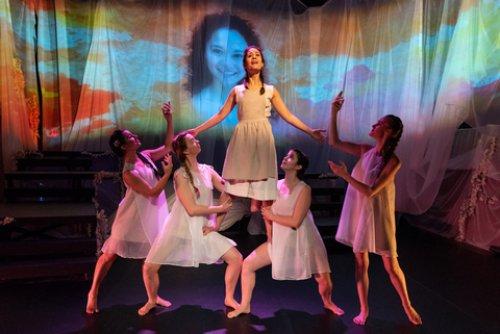 Ali Ewoldt with dancers in a scene from “Anne of Green Gables: Part I” (Photo credit: Russ Rowland)

As the dance/drama proceeds Ewoldt takes on the physical attributes of one character after another fleshing out the adventures and relationships of Anne with the denizens of her new town.  She is a fine actress and gives heft even to the silliest situations as well as the sad ones, all assisted by her troupe of four dancers.

Anne of Green Gables: Part I is a treat even for those familiar with the story from the novel or previous dramatizations because it tells the story from Anne’s point of view, a psychological approach not previously tried.

The Royal Family is alternating Anne of Green Gables: Part I with Part II in which the story is told from the point of view of Marilla Cuthbert, played by the fine singer/actress Doreen Montalvo.