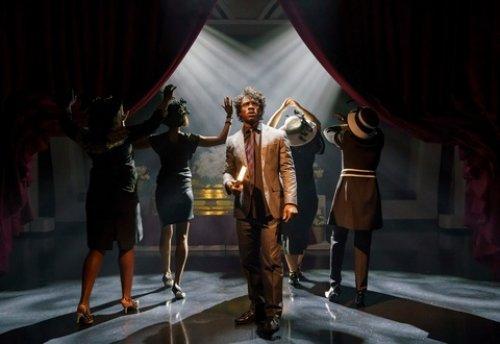 The promise of President Barack Obama’s administration has come and gone. New playwright Jordan E. Cooper has appropriated this phenomenon head on and written Ain’t No Mo’ which has a unique take on the rampant racism in America these days. According to the play “somewhere beyond now,” the United States government offers to give every ancestor of a former slave a one-way ticket back to Africa to the country of origin – or else. This satiric work explores events before, during and after this momentous occurrence.

Delving into black life and attitudes now, the play is hilarious – but not laugh-out-loud funny. Unfortunately, in Stevie Walker-Webb’s fine production at The Public’s LuEsther Hall, the sketches go on too, long, way past their due date and long after we have gotten the point of the satire. Of the talented cast of six African American actors, five are in the majority of the scenes while playwright Cooper appears in three solo sketches.

Starting with the opening Prologue welcoming us to the theater, the language is raunchy, raw and trenchant, making use of words not usually used in polite society but quite funny in this context. The first sketch takes place on the evening of Obama’s election, November 4th, 2008. Pastor Freeman (Marchánt Davis) is conducting a church service for a fellow parishioner Brother ‘Rightocomplain’ who has been killed by the news of the election of the first African-American president as his function in life is over. In an impassioned performance, Davis as Freeman tells of all the things that “ain’t no mo’” now that a black man is in the White House.

Having written the best role for himself, Cooper plays Peaches, a drag queen airline attendant on African American Airlines processing the final “Reparations Flight,” this last one to Dakar, Senegal. In the middle of the gate floor is Miss Bag, “the carrier of our entire story as a people in this country as we make this glorious transition.” Peaches informs us that African-American Airlines is “a dedicated observer of equal oppressions, no matter what color your eyes are,” and that today’s captain will be former President Obama. 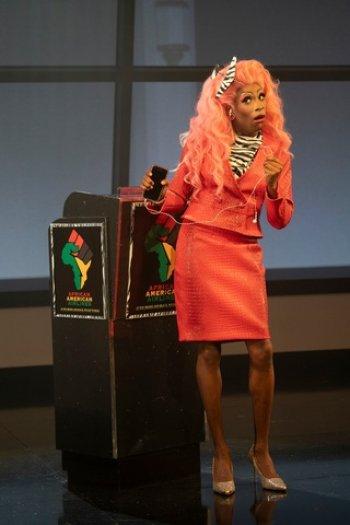 People having been processed are warned about turning around on the way to the plane or they will lose their color and turn into a privileged white male with all previous memories wiped out. Playing a bigger-than-life character, Cooper gives a bigger-than-life performance making three appearances in the course of the play between the other sketches each called “Exit Strategy” including the tragic, final one, which leads up to the last plane taking off for Africa.

The third scene, “Circle of Life” takes place at an abortion clinic while Trisha awaits her number to be called. Next to her is her boyfriend or husband Damien who begs her not to go through with it as he believes that the tide is turning and the child could grow up to be a doctor, a movie star or even president of the United States. Then we discover that Damien is no longer in any position to give orders to anyone anymore as he has made a bad decision. Playing Trish and Damien, Jennean Farmer (subbing for Fedna Jaquet) and Davis are a very real couple caught up in a tense situation.

The fourth scene parodies reality television. Tony Logan’s series is called “Real Baby Mama’s of the South-Side.” While the four seemingly trashy women take questions from the viewers, they refuse to accept black “Rachonda” who is transitioning from white “Rachel” to be the first Transracial cast member. When it turns out that the four are actresses playing parts written for them, a real life fight occurs that thrills the producer looking for a Jerry Springer event: who are the REAL black women? Farmer, Simone Recasner, Ebony Marshall-Oliver and Crystal Lucas-Perry have a ball as the insults fly between them as Davis as Tony Logan tries to referee.

In “Green,” Cooper explores race through economic status. Marie, the matriarch of a family of black millionaires of inherited wealth who behave like their white suburban counterparts, has called a meeting to discuss the government email that they return to Africa or “face extreme racial transmogrification.” Although they ignore it all along, we hear chains rattling in the basement which they conclude is one of their father’s old machines. For Marie, the only color that matters is “Green,” the color of your money. 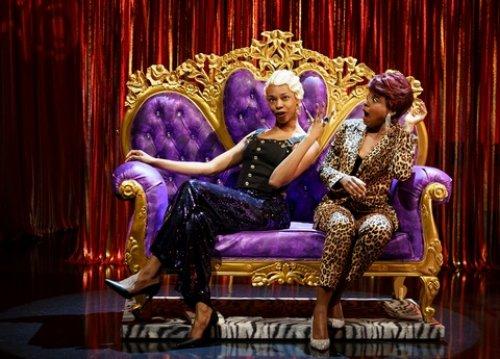 Suddenly they are confronted with “Black” who has broken free from confinement in the basement for 40 years by their father and claims to be the only one in the room to reresent the family’s blackness. In order not to be embarrassed before their neighbors, the family takes matters into their own hands when “Black” will not return to the basement. As the unwanted visitor, Lucas-Perry makes the most of a speech which defines all varieties of blackness in the United States.

The seventh and next to last scene is called “Untitled Prison Play.” Three inmates are awaiting release in order to board the plane to Africa in good time and are given the belongings which they had on their persons the night of their arrest. When it is the turn of Sharon Kilton, nicknamed “Blue,” she objects that something is missing. Ultimately, we realize that it is her soul that has gone missing during her incarceration.  Lucas-Perry, in another tour de force role, is extremely poignant as she searches for something she is never going to get back.

Kimie Nishikawa’s six settings including the elaborate airport terminal immediately telegraph the locations with the minimum of work. The costumes by Montana Levi Blanco fulfill all of the needs of this multiscened work and for characters of all different economic levels. Most memorable is Cooper’s pink suit with a black and white airplane as a hair pin. Complementing this outfit is designer Cookie Jordan’s pink wig and elaborate makeup for Peaches to complete the picture. Designer Adam Honoré’s lighting shifts subtly for each sequence. Other members of the production team whose work adds to the event are Emily Auciello’s sound design and Thomas Schall’s fight direction.

While Ain’t No Mo’ is extremely topical and hits all the right buttons in a very original manner, the individual sketches go on too long, long after the audience has gotten the point. Satire only works if it takes the audience by surprise. Once it gives up its secret it no longer continues as effective parody. Jordan E. Cooper is a remarkable new talent both as writer and performer. However, the message from Ain’t No Mo’ is less is more. Nevertheless, under Stevie Walker-Webb’s astute direction the versatile five-member cast is totally attuned to Cooper’s humor and rhythms.