Laurie Metcalf as Annie Wilkes and Bruce Willis as Paul Sheldon in a scene from “Misery” at the Broadhurst Theatre (Photo credit: Joan Marcus)

Action superstar Bruce Willis makes his Broadway debut as novelist Paul Sheldon in Misery, screenwriter William Goldman’s stage version of the 1987 Stephen King psychological horror story. Filmed in 1990 with a script by Goldman, it went on to win Kathy Bates a well-deserved Oscar in the role of Annie Wilkes, a Colorado farm woman and nurse who saves the famous writer’s life after he has been seriously injured in a car accident but refuses to let him go. As in the movie, it is the woman’s role that requires the acting tour de force and Laurie Metcalf who has been much on New York stages both on and Off Broadway in recent years (A Lie of the Mind, November, The Other Place, Domesticated) makes the most of it.

Goldman’s adaptation sticks closely to his screenplay with the exception of eliminating all of the scenes that do not take place in Annie’s farmhouse, so that the play has only three characters, including the sheriff Buster (played by Leon Addison Brown) who stops by several times in the search for Sheldon. All of the famous moments are still there including the scenes with the barbecue grill, the candle, the hypodermic needle, the sledgehammer, the gun, etc. However, the plot has been trimmed a bit and Annie’s backstory has been abbreviated making her a little less psychologically complex. Willis’ Sheldon spends most of his time lying in bed immobilized or later in the story confined to a wheelchair. The problem for the actor who has not appeared on the New York stage in over 30 years is that he does not have the technique which would allow him to play the role simply with his face and voice. Wearing a beard disguises his face and as his voice remains stoical throughout, Willis’ performance seems smaller than it might have been. While the film often focused on James Caan’s face giving us his tiniest reaction, in the theater an actor has to be a bit bigger in his reactions to be seen by the audience. Not surprisingly, action star Willis is excellent at the physical movement he is required to do around the stage (like crawling from bed to door) which he makes look painful but that is about it. He is satisfactory but does not do much with his character. 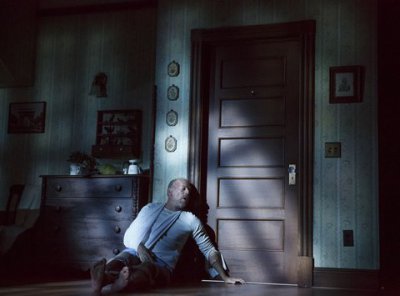 Bruce Willis as Paul Sheldon in a scene from “Misery” at the Broadhurst Theatre (Photo credit: Joan Marcus)

For those who have not read the novel or seen the movie, the play begins with Victorian bodice-ripper author Paul Sheldon waking up in a strange bedroom in a remote farmhouse to find Annie Wilkes staring at him. “I’m your number one fan,” she tells him, and has apparently been living with his heroine Misery Chastain as though she were real. He has been injured in a blizzard after leaving Silver Creek Lodge where he had just finished his latest novel, something new for him. He has two broken legs and a dislocated shoulder which Annie, a nurse, has patched up, as the road to the hospital is out as is her phone.

However, when he allows her to read his new autobiographical novel, she is incensed by the profanity. And when she receives her copy of her new Misery novel, the ninth, and discovers that he has killed off his heroine, she becomes dangerous. She makes a deal with him that he will be allowed to leave if he writes a sequel in which he brings Misery back. Paul realizes that he is Annie’s prisoner and he will be lucky to get out alive in one piece.

The best role in the story is that of sociopath, deranged Annie Wilkes. Metcalf runs the gamut of emotions from bliss to murderous rage and back and turns on a dime. Unlike Willis, she uses her face to show all of her moods both pleased and black.  Always interesting to watch, her Annie is revealed as crazier the longer the story goes on. The scenes in which she has to get Paul back into bed suggest that her Annie not only contains tremendous emotional extremes but also enormous strength from years running her farm. Playing the role less childless-like than Kathy Bates did in the movie, she makes Annie Wilkes all her own. As the third member of the cast in the minor role of the sheriff, Brown is completely convincing but he hasn’t been given much to do in his few brief scenes. 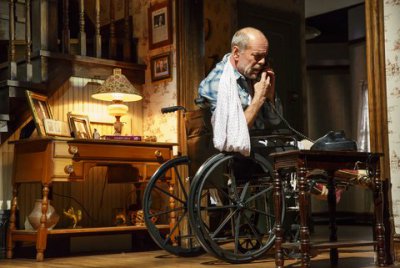 Bruce Willis as Paul Shelden in a scene from “Misery” at the Broadhurst Theatre (Photo credit: Joan Marcus)

The pace of director Will Frears’ staging is a bit languid as if he is aware that most of his audience knows what is coming in this psychological thriller and doesn’t need to ratchet up the tension in each succeeding scene. While the tempo might be lax, the production team has done a superb job. David Korins’ farmhouse setting on a revolving stage which allows us to see three rooms in the house with their old fashioned fixtures as well as the front porch is particularly effective. David Weiner and Darron L. West (lighting and sound design, respectively) have added a good deal to the atmosphere, from eerie shadows on the wall to sudden thunder and lightning. The costumes by Ann Roth for Metcalf vividly bring to life a woman who is both a loner and has old-fashioned, dated ideas and values.

While it would not be fair to give away much of the special effects by Gregory Meeh, suffice it to say that the play begins with the curtain up and snow falling on the front of the farmhouse. Michael Friedman’s original music moves from melancholy strains to creepy thriller film music. “I’ll Be Seeing You” is among the ironically titled songs that are on the play’s soundtrack. The final violent scenes include the work of fight directors Rick Sordelet and Christian Kelly-Sordelet.

Another weakness of the play is that it takes place in 27 short scenes which include endless blackouts. While this is fine in a movie as film cuts, it draws attention to itself on the stage. Misery, the play, will be remembered for Bruce Willis’ mild Broadway debut and Laurie Metcalf’s bravura performance. As a thriller for the theater, it counts heavily on the audience’s expectations as to where the story is going.