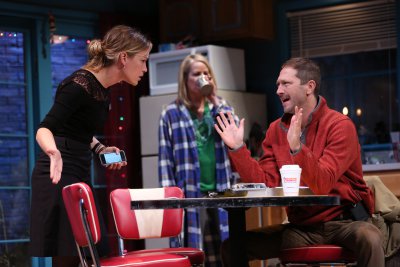 John Pollono, author of 2013’s smash hit Small Engine Repair, does it again with another twisty drama of a blue-collar family in New England. Lost Girls (which is just as twisty as the earlier play) is again set in Manchester, New Hampshire, and deals with characters who could easily be relatives of the ones in the previous N.H. drama. It also gives Golden Globe nominee Piper Perabo (Covert Affairs) one of those bigger-than-life dynamic roles which is certain to become legendary. Directed by Jo Bonney who also staged the crackerjack Small Engine Repair, Lost Girls is always riveting as the revelations come thick and fast and twists continue to take us by surprise.

The title refers to three generations of women whose lives have been derailed by early pregnancies. When the play begins, we are in the modest home of embittered, single mom Maggie (Perabo) who is late for work at the Bloomingdales outlet during a nor’easter when she finds that her car has been stolen. When she also discovers that her daughter Erica hasn’t been to school that day, she realizes that her car hasn’t been stolen but taken by her daughter who it turns out has a boyfriend her mother knew nothing about. However, Maggie can’t afford to lose her job – or her mortgage – as her cushion this month is all of $23 and she is a “pizza an’ a six pack away from bouncing the electric bill.” This is life on the edge of subsistence for many Americans.

Aside from her foul-mouthed mother Linda (Tasha Lawrence), the second generation of single moms who has lived with her since her divorce two years before from a local cop, she is suddenly confronted with ex-husband, Lou (Ebon Moss-Bachrach), now a N.H. state trooper and recovering alcoholic, who has come on his day off to do the paperwork and try to find his missing daughter. With him, he has brought his second wife Penny, a born-again Christian who has a platitude for every occasion and a cheery word for every distress. The stage is set for fireworks.

Just when we think that the play will remain a confrontation between these characters with a good deal of baggage, the play shifts to a Connecticut locale in a snow storm in which a teenage Boy (Josh Green) and Girl (Lizzy DeClement) – both unnamed – check into a budget motel on their way to Florida. Although just a classmate, the Boy has been convinced by the Girl to borrow his mother’s car to drive her to meet a much older boyfriend whom we discover was once her mother’s partner. However, the naïve, immature Boy, a school athlete, has had a crush on the Girl since second grade and is willing to do anything for her, while the hard-as-nails Girl has been using him just to get out of Manchester. 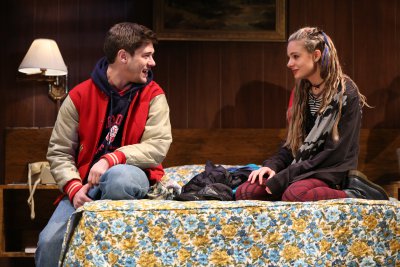 The play alternates between the two locales and the two stories, the couple approaching middle age and the young couple hurtling into adulthood. When Lou discovers that Maggie’s Honda has been involved in a ten car pile-up on the interstate, the stakes are raised. And when Lou and Maggie are left alone, all of their old hurts and grievances come pouring out. They may be divorced but their lives are inextricably linked. The Boy and Girl, obviously not meant for each other, eventually drift into a romantic relationship which we suspect will lead to no good. All of Pollono’s New Hampshire women seem to be lost girls.

Perabo gives a raw, blazing performance as a terminally damaged woman for whom life holds no expectations except the next crisis. From the opposite end of the spectrum, Moss-Bachrach makes the sensitive, retiring Lou, too emotional for his job, a very sympathetic and fully developed character, an idealist for whom modern life is too much. As they both flay each other and peel away layer after layer of hurt and misunderstanding, they work their way back to what attracted them to each other in the past.

As the younger couple, Green and DeClement are equally opposites. DeClement, a girl already as damaged as Maggie, is just as forceful and persuasive. When she has a sudden revelation near the end of the play, “What if it never gets any better than this?”, she speaks for all the women in the play who are living dead-end lives with no hope in sight. Making his New York debut, Green is a very personable actor who is able to hold his own with DeClement’s more ferocious and experienced Girl. As the Boy, he holds on to this idealism and his beliefs that life is worth living by the rules. Meghann Fahy initially makes Penny a figure of fun but in the course of the evening she stands up for her beliefs and eventually demonstrates there is an alternative to the way Maggie and her mother have been living. Lawrence adds local color as Maggie’s mother who doesn’t have a good word to say about anyone.

Using most of her design team from Small Engine Repair, Bonney has the same degree of realism. Richard Hoover’s two sets instantly establish the milieu and socio-economic class of the characters we are about the meet. So too do Theresa Squire’s costumes define the dead-end lives of these men and women of different ages. Lap Chi Chu’s wintery lighting put a chill in the viewer long before the characters reveal their lives of quiet desperation. Pollono’s dialogue has the authentic tang of regionalism as well as the depths of tragedy. Lost Girls is a play that you will think about long after you have left the theater.