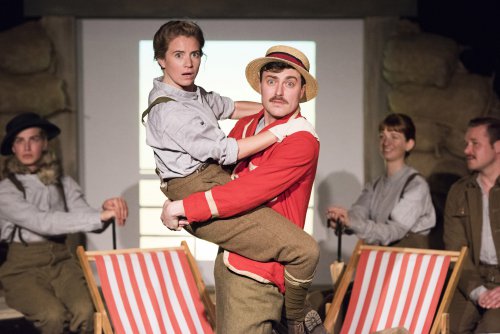 Caitlin Thorburn and Tom Machell (center) in a scene from “Life According to Saki” (Photo credit: Monica Simoes)

Hector Hugh Munro, better known as the Edwardian author Saki, wrote off-beat macabre short stories, each with a surprise ending, from 1904 leading up to World War I. Enlisting in 1914, he refused a commission and was sent to fight in France where he was killed by a sniper in 1916 at Beaumont Hamel. Compared to Oscar Wilde as crossed with Roald Dahl, his unusual stories have endured due to their curious and individual style. The U.S. premiere of Life According to Saki, given the Carol Tambor Best of the Edinburgh Award at last summer’s fringe festival, proves to be a charming evening in the theater told in a most unusual way. However, made up of eight Saki stories it may be too jam-packed for its own good.

The evening is narrated by Saki (played by an appealing and suave David Paisley) talking to us from the trenches of France, in 1916. His five soldiers (played by Phoebe Frances Brown, Ellen Francis, Tom Lambert, Tom Machell and Caitlin Thorburn) all like stories and he obliges. As he tells his eight tales, the cast enact them, using slight costuming added to their uniforms and occasionally use puppets to represent animals and children.

The stories range from school-age pranks, to the problems of adulthood, and ultimately to death. The characters are played by the three men and three women without regard to gender. Anna Lewis’ set design which resembles a trench also includes amusing black and white slide drawings that are projected on the back wall which add pictorially to the representation. 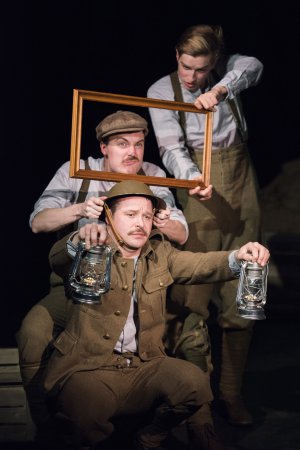 Tom Lambert, Tom Machell and David Paisley in a scene from “Life According to Saki” (Photo credit: Monica Simoes)

Aside from narrating the stories, Paisley also gives snippets of biographical facts, a sample of his political satire, and pithy aphorisms such as “Live your short life hugely,” “Unleash your inner ferret,” “Crush you inner aunt,” etc. The first story, the oft-anthologized, “The Unrest Cure,” brings 15-year-old Clovis into contact with a middle aged man who has gotten into a rut. He decides to give him a series of shocks that will change his life forever. In “The Baker’s Dozen” (which was written as a one-act play), widowed Emily Carewe and the equally widowed Major Dumbarton, engaged in earlier years to each other, meet up on an ocean liner. When they decide to hook up together after all these years, having 13 children between them seems to be an insurmountable problem.

In “The Lull,” a young lady asked to keep a politician’s mind off his upcoming election succeeds beyond her wildest dreams. “Esmé,” one of five stories taken from Saki’s volume, The Chronicles of Clovis (1911), deals with two mercenary women on a fox hunt, and satirizes both the aristocracy and greed. “The Background” is an ironic tale of art and money. By the time we get to “Mrs. Packletide’s Tiger,” Saki is up to the themes of friendship, jealousy and social position. The strangely named “Shredi Vashtar” deals with religion and the power of belief told from the point of view of a ten-year-old boy. The final story, “The Wolves of Cernogratz,” from the last collection Saki published before leaving for the front, concerns death and social climbing, in that order.

Under the astute direction of Jessica Lazar, the six member cast made up of emerging young professionals based in London demonstrates their versatility playing young and old, men and women, as well as acting as puppeteers when needed. The play, a first effort by award-winning children’s book author Katherine Rundell, contains a great deal of wonderful material. The problem is that eight stories, while extremely faithful to the originals except for some politically correct updating, is a bit much to take in at one time, and it might have been better to have told fewer stories that were further fleshed out from what Saki wrote. The snippets of biography spoken by Paisley are entertaining but give no sense of the author. 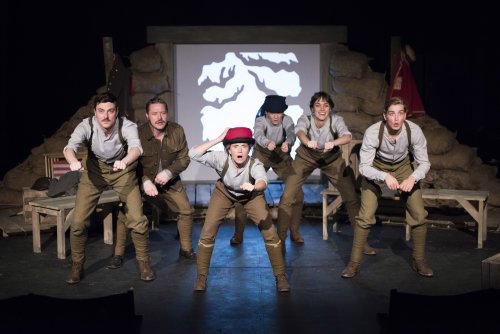 The production does full justice to the stories as written. Aside from the stylized settings, Lewis created the costumes which turn the soldiers into all of Saki’s mostly English characters. David Doyle’s lighting and sound design always accomplishes what is necessary to tell the eight stories. Clair Roi Harvey and Suzi Battersby are responsible for the life-like puppets. While Life According to Saki is laden with too many riches for one evening, it is a very diverting show with its eccentric and unconventional stories which retain their relevance after all these years. Saki’s off-beat humor still seems extremely modern.