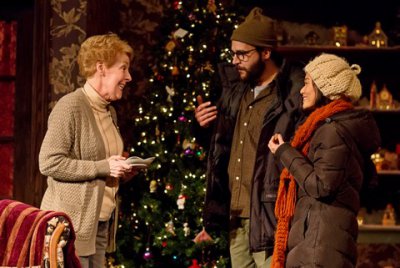 Annie Baker has become a controversial playwright, not for her skill with language or her handling of psychological depths of her characters.  Even though she has brilliantly explored the inner lives of ordinary people in Circle Mirror Transformation and in her Pulitzer Prize-winning The Flick, the mention of her name evokes only one response:  too long!  Yes, certainly, Ms. Baker writes marathon-length works and her latest, John at the Signature Theatre, does nothing to shake that reputation.  The length of John, however, is not a gimmick, but an organic part of the storytelling.

Elias, a second-rate musician, and Jenny who writes questions for an egghead quiz show are in a doomed relationship.  Elias keeps baiting Jenny to give credence to his own self-hating.  When she admits she doesn’t like the way he eats his cereal, he claims she means that he “chews like a Jew.”  Jenny had an abusive relationship which may, or may not, be ongoing.  What begins as irritating exchanges escalates into near violence by the end of the play, involving threats to the well-being of a mysterious doll, Samantha, which might just be the very one Jenny owned as a child.

Mertis has her own back story that slowly emerges.  She lives in the B & B with her unseen husband and has, she says, just lost nearly seventy pounds on a peculiar diet that includes injections of a powerful hormone.   She worked in a menial position in a hospital where her sister was a nurse.  She occasionally reveals a steely coolness under the brittle genteel façade.  Clearly, she and her inn, hold many surprises.

Genevieve has two long monologues.  The second interrupts an intermission, delivered standing before the closed stage curtain.   They tell of how she lost her mind which is now possessed by her late husband.  The description of madness is frightening and funny, at least in the hands of the brilliant Smith.  Even when she is sitting still, which she does to frightening effect, she exudes drama. 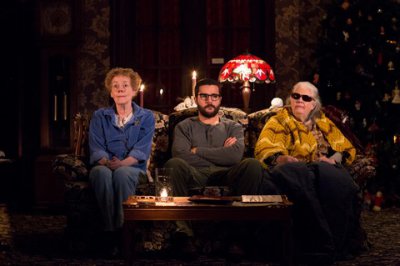 Ms. Engel is also magnificent in a less showy way.  Even as she resignedly ascends the long staircase to check out the upstairs guest rooms, there’s something in her physical demeanor that suggests both wariness and mystery.

The two younger actors are extraordinarily annoying, which means they inhabit their characters perfectly.  Mr. Abbott and Ms. Chau slowly melt into the melancholy, moody house even as they unravel.   The feeling that they won’t be able to leave after destroying each other becomes overwhelming.

The final few minutes are the most revealing and also the most mesmerizing.

Sam Gold, Ms. Baker’s long-time collaborator, understands her timing and stages the play with precision yet capturing the overall sense of foreboding that gives John its texture.

Baker fills John with telling details, from the food (ever hear of Sailor’s Duff?) to hidden rooms to specifics of Gettysburg, that keep the play from floating away into total surrealism.  She is helped by Mimi Lien’s extraordinarily detailed set which evokes worlds within worlds with its amazing array of tchotchkes, perfectly chosen furniture, a player piano that erupts at odd moments, ceiling fans lazily, but ineffectively whirring, and a multitude of doors.  Mark Barton’s atmospheric lighting is perfection.  Ásta Bennie Hostetter’s costumes are well thought-out and Bray Poor’s sound design gives eerie life to the show.