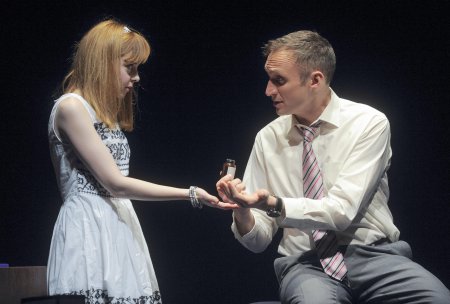 Although Alan Ayckbourn became famous writing very wry comedies, his 79th play, Hero’s Welcome, is more an intricately plotted psychological drama of character. Best known in the United States for The Norman Conquests, Bedroom Farce, and Absurd Person Singular which have already had two New York productions each, he was once known as the British Neil Simon but his recent plays have turned more serious.

Now having its American premiere in repertory with Confusions, one of Ayckbourn’s earliest plays, with the same actors in both, the production which is directed by the author is from the Stephen Joseph Theater, Scarborough, where most of the author’s plays have had their world premieres. This is a powerful and engrossing study of friendship, love, jealousy, competition and betrayal.

Murray, a decorated war hero, has returned to the northern English town of Hadforth where he left under a cloud 17 years before. He brings his new wife Baba, a refugee from an Eastern European war, and plans on settling down now that he has retired from the army. He returns home hoping to reopen The Bird of Prey, the hotel and pub that belonged to his parents and where he grew up. While the media hails his return, his former friends do not seem happy to see him. In fact, his best friend Brad, and Alice, his ex-fiancée who he left at the altar and now the town’s mayor, wish he would go away. 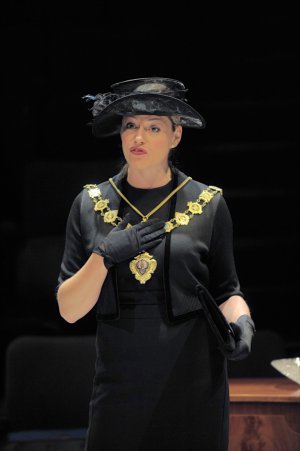 Brad, the son of privilege and power, is still as competitive as before, while Alice who is still secretly in love with Murray has not forgiven him. Both have married ineffectual spouses they despise, Brad openly of Kara who puts up bravely with his insults, Alice more circumspectly of Derek who is continually getting caught up in Brad’s games. Both think that Baba who knows little English is as simple as she looks – but they will discover that they are wrong. However, Alice’s town council has condemned the untenanted Bird of Prey as a derelict building that must come down. The hotel has different memories for Brad, Alice and the returning war hero. Murray and Baba are going to have their hands full from their former friends.

Each of Ayckbourn’s plays has a device which makes you marvel that no one  has thought of it before (the same story told from three points of view, two time frames simultaneously, multiple permutations of the same plot,  a story in which the protagonist never appears,  etc.), so clever and obvious does it seem. In Hero’s Welcome, there are three sets on stage: Murray and Baba’s hotel bedroom, Alice and Derek’s kitchen and Brad and Kara’s living room. The six characters keep recombining in new and endlesspairings to tell Ayckbourn’s intricate tale of treachery and resentment. Just when you think there are no more permutations possible, the author surprises you. As usual, one marvels at the intricacy of the plotting.

As always in a play directed by Ayckbourn, the casting and characterizations are keenly deft. As Murray, the returning soldier who acts as the play’s catalyst, Richard Stacey is both stalwart and upright as a man with much on his conscience. While at first seemingly simple due to her lack of English which provides much comedy, Evelyn Hoskins as his younger wife is shrewd on the uptake in a way her husband isn’t. Stephen Billington is to the manner born as the entitled, combative Brad who hates to lose, while Charlotte Harwood as his disdained wife is a strong adversary in the way she takes the continual demeaning abuse that occurs. 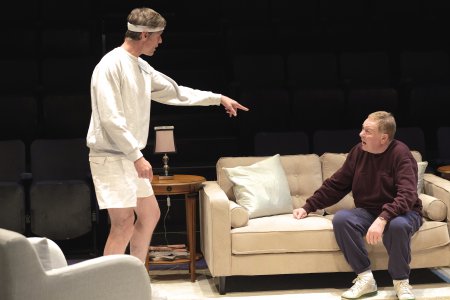 As the jilted fiancée now the mayor, Elizabeth Boag’s Alice is grim and morose as a woman for whom life has not turned out in the way she expected. Russell Dixon, who is appearing in New York in his third and fourth Ayckbourn plays (Arrivals and Departures and Time of My Life in 2014, and Confusions and Hero’s Welcome this summer), plays a distinctively subtle performance as a man so honest and inept that he inadvertently causes the ultimate tragedy.

Michael Holt’s three settings for bedroom, kitchen and living room in three different houses look cramped on the small playing area at Stage A at 59E59 Theaters but they work suitably for their purposes. His costumes astutely define each character. Jason Taylor’s lighting design subtly directs the audience’s attention from one set to the other as the play follows its circuitous path to its surprising and shocking conclusion.

Even in Hero’s Welcome, his 79th work for the stage, master playwright Alan Ayckbourn is still able to come up with new twists and turns that astonish and amaze. Brilliantly acted by an excellent ensemble which is also appearing in Ayckbourn’s comedy Confusions, Hero’s Welcome is revelatory about the ways of jealousy, competitiveness and love rejected.

Hero’s Welcome (in repertory with Confusions through July 2, 2016)