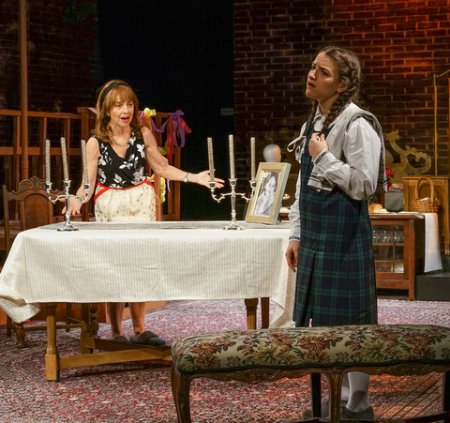 After producing acclaimed revivals of Waiting for Godot and Death of a Salesman in translation, New Yiddish Rep has a most timely revival with its latest offering: a rare production of the 1907 Sholem Asch classic, God of Vengeance. It is particularly of the moment with the transfer of Paula Vogel’s Off Broadway hit play from last spring, Indecent, to Broadway’s Cort Theatre starting on April 4.

Vogel’s new play dramatizes the tumultuous history of the Asch play from Poland to Germany to Russia to Italy and finally to New York and beyond and the sensational arrest of all of its actors for indecency two weeks after its Broadway premiere on February 19, 1923. The New Yiddish Rep’s production should be required viewing before seeing Indecent in order to know what all the fuss was about.

Performed at La MaMa, not far from where the play had its original Off Broadway premiere in the fall of 1922, this powerful three act tragedy is performed in Yiddish with English supertitles and runs a streamlined 95 minutes without an intermission. The play, obviously inspired by Gorky’s The Lower Depths (1902) and Bernard Shaw’s Mrs. Warren’s Profession (published in 1893, performed 1902), deals with such universal themes as ethics, hypocrisy, guilt and retribution.

Surprisingly, Eleanor Reissa’s production for New Yiddish Rep has made some debatable choices which damage the power of the play. First of all and most obviously, although not a word has been updated, the characters wear contemporary clothing and use modern objects like headphones, a plastic umbrella and platform shoes. Since there are references to opening a horse stable and the sexual mores of 1907 have changed considerably, this is both distracting and confusing. (The word “roubles” has been eliminated for the more innocuous bucks and coins.) 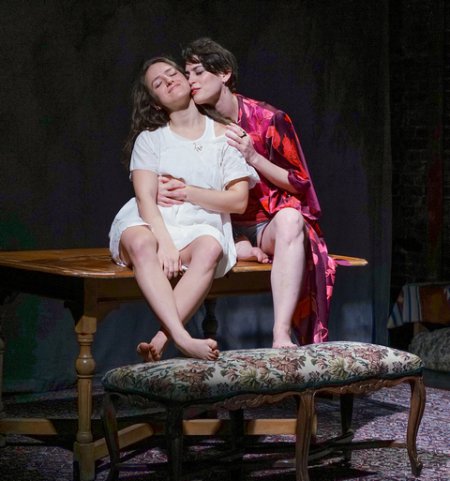 Billy Martin’s original background music is the kind of jazz that did not exist, particularly in the orthodox Jewish community, at the turn of the last century. If the intention is to suggest that hypocrisy and corruption still exists today, the play is persuasive and potent enough not to need any visual aids. Donald Margulies’ 2000 version updates the play to the Lower East Side in 1923, the year of the New York production; however, this is not the adaptation that the New Yiddish Rep has chosen to do.

The revival which does not define the place or the time although Asch’s original is set in 1908, Poland, seems to take place in a sort of geographic limbo. The family of Yankl Tchaptchovitch is celebrating his having commissioned a Holy Scroll (i.e. Torah, or Five Books of Moses) both as a donation to the synagogue and as part of the eventual dowry for his sheltered 17-year-old daughter Rivkele who has been brought up as a pure, respectable Jewish daughter who her parents expect to win a Talmudic scholar for a husband. Sarah, his wife, awaits the visit of Reb Eli and the scribe.

Yankl is having trouble finding upright neighbors to attend and must invite poor people who show up for the free food and drink. Little by little we learn the shocking news that he runs a brothel downstairs from their apartment and that his wife Sarah, Rivkele’s mother, was previously one of his prostitutes. This has been kept from their daughter who remains untouched by it all.

Yankl is guilt ridden that the sins of the father may be visited on his child. While Reb Eli’s attitude is that “the Lord loves a repentant sinner,” the Scribe’s attitude is that “Our Lord is a God of mercy and forgiveness, but He is also a God of retribution and vengeance.” Rivkele’s strict upbringing has been to protect her from her parents’ profession. However, unknown to her father, Rifkele has developed a romantic attachment for Manke, one of her father’s working girls and late at night the two girls visit. 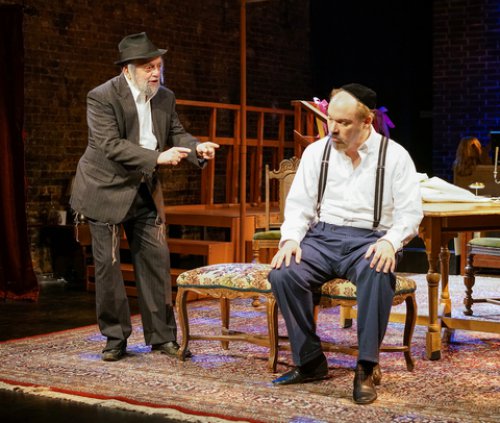 While the father works to find a suitably respectable husband for his daughter, her friendship with Manke will lead to the play’s disturbing ending. The original New York Jewish audiences were shocked by the play’s first lesbian kiss on Broadway, the depiction of Yankl as a brothel manager, and the desecration of a Torah by placing it in the home of such an impure family.

While the story is still absorbing and shocking, the cast is uneven which makes the play less effective than it might have been. Reissa gives a magnificently layered performance as Sarah, Yankl’s wife. She runs a range of emotions and a whole symphony of moods. Unfortunately, Shane Baker as the play’s protagonist Yankl is rather one dimensional, expressing only anger as he worries about his guilt over his chosen profession. David Mandelbaum, artistic director and co-founder of New Yiddish Rep, is amusing and two-faced as the corrupt Reb Eli for whom money can cover up a world of sins.

As the virginal Rivkele, Shayna Schmidt conveys her vulnerability and naiveté, but nothing more. Melissa Weisz is an animated Manke; however, in their one love scene we are not so much impressed by the play’s poetry but how it turns into a seduction by Manke, seemingly to turn Rifkele into a prostitute like herself.

Caraid O’Brien as Hindel, Yankl’s leading prostitute, and Luzer Twersky as her sleazy pimp and fiancé Shoyme give solid performances without being at all sympathetic. Rachel Botchan and Mira Kessler are touching as other women in Yankl’s stable who feel that they have more freedom now than in the lives they previously led. Eli Rosen as the Scribe brought in to create the new Torah is rather stiff and stolid rather than representative of a more orthodox point of view.

Vicki Davis’ set with its heavy turn-of-the-last-century furniture is at odds with her excellent but anachronistic modern costumes. Kirk Bookman’s lighting fails to create much atmosphere for the second act moonlight scene. Martin’s original music is atmospheric but gives the wrong mood for this play. Despite the production’s deficiencies, it is at all times lucid and easy to follow even for those of us who do not speak Yiddish and the story’s power continues to shine through.