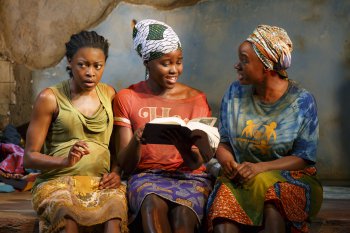 An opportunity to see the luminous Academy Award winner Lupita Nyong’o live on stage may be the reason most people are rushing to the Golden Theatre, but, thrilling as that may be, Eclipsed is its own reward, a starkly detailed, microcosmic observation of just one ghastly corner of a ghastly civil war.

Danai Gurira fashioned her play to allow us to witness—with little attempt to soften the blow—the suffering of four women gathered in a bullet-ridden cement block hut, during the recent civil war in Liberia (a country once a beacon of light for the descendants of slavery), their every action lorded over by an offstage demon who abuses them mercilessly.

Ms. Nyong’o plays the Girl, a young, newly abducted woman/child whom the “wives” of the commandant protect as well as they can, until she falls under the influence of rogue Wife #2 (a rail-thin package of nervous energy, Zainab Jah) who turns her into a killer warrior.  Watching Ms. Nyong’o’s transformation is scarily good theater.  Her relationship with Ms. Jah is an object lesson in the psychological give and take of student and teacher, with role reversal almost inevitable. 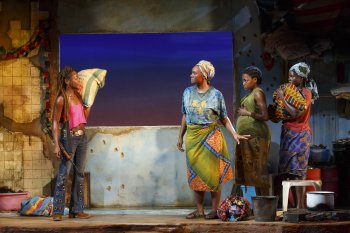 Wife #1 (a wonderfully earthy and maternal Saycon Sengbloh) cares for the others, including the pregnant, chattering Wife #3 (a divinely full-bodied, but childlike Pascale Armand) who, through the efforts of humanitarian aide worker, Rita (an elegant, but passionate Akosua Busia) realizes the possibility of a new life after the civil war.  Watching the illiterate Wife #3 learn to write her own name and then claim it as her own is beautiful to behold.

The stark, but lush set by Clint Ramos is frightening in its incredible detail.  The pathetic cinderblock cabin that is the home base of the characters, where they cook their meager rations and keep each other’s spirits up, is moved about like an island of sanctuary amidst a ferociously threatening jungle.   His costumes, from the pathetic remnants of civilian clothing to the military uniforms of Wife #2 and the upper-crust outfits of do-gooder Rita are as important to the characterizations as the writing and the acting.  The atmospheric lighting of Jen Schriever adds inextricably to the play’s message.

For the record, this production of Eclipsed represents a milestone in Broadway history:  the first production with an all-female, all-black cast, director, writer and production team (designer Clint Ramos is the sole exception.) Why this took so long can be the subject of pointless debate, but the brilliance of this team’s penetrating look at human suffering and redemption cannot be denied.