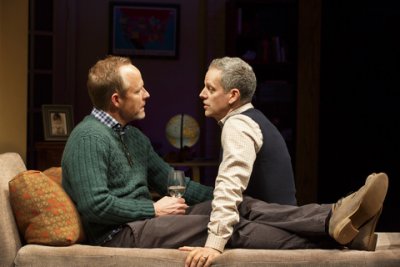 Dada deals with three couples.  Rob (Patrick Breen), a psychotherapist and Alan (John Benjamin Hickey), an artist, have been together the longest and have a daughter, Nicola (voiced by Tori Feinstein).  Their relationship and its ups and downs is the focal point of the play.  Alan’s best friend from schooldays is Michael (John Pankow), a very understanding straight guy, married to Serena (Kellie Overbey).  They have a child, too.  Michael is cheating on Serena with the passionate—and very loud—Julia (Tammy Blanchard), an actress, also married (to a possibly gay man) and a mother.  The third couple is the totally mismatched Scott (Stephen Plunkett), an uptight financial whiz and the much younger, hunky Jason (Alex Hurt), a painter on the brink of success, who just can’t keep it in his pants—much to the chagrin of Scott. 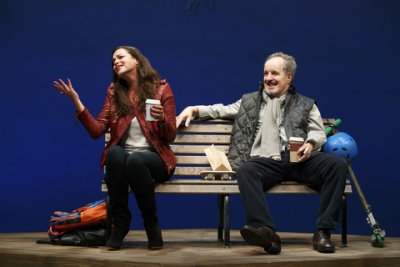 As the play moves from one well-appointed room—including a “Scandinavian-style” kiddy den—to another and from a pastoral Central Park to posh restaurants with a worrisome stop at one of the least child-appropriate sites in the world, Fire Island Pines, the seven parents kvetch about nannies, getting into the right schools, their professional lives and react to the news of infidelities which rocks all three couples.  They worry about their professional lives, losing their looks, and about their children not loving them enough, or at all.  The specter of infidelity, inadvertent or otherwise, hangs over the proceedings, forcing the plot along.

The main problem with Dada Woof Papa Hot is that, despite the brilliant acting of all concerned and Parnell’s sharp ear for the language of each person, it’s difficult to empathize deeply with these characters, all of whom appear to be well off, well educated and by no means victims of circumstances.  They wanted to be married.  They wanted to have children and then complain endlessly about the vicissitudes of their actions. 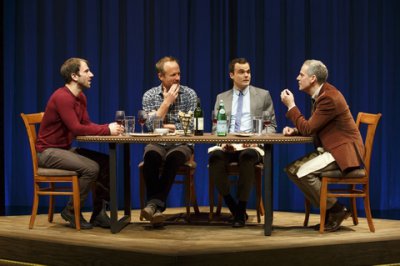 This admirable production—with slick sets by John Lee Beatty, perfect costumes by Jennifer von Mayrhauser and subtle lighting by Peter Kaczorowski—has many pleasures.  The attractive actors mine Parnell’s literate and witty dialogue for all its worth, to the great credit of their incisive and experienced director, Scott Ellis.

Running time:  one hour and 40 minutes with no intermission