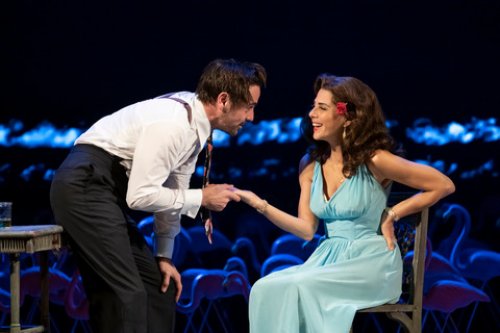 Emun Elliott and Marisa Tomei in a scene from the Roundabout Theatre Company’s revival of Tennessee Williams’ “The Rose Tattoo” at the American Airlines Theatre (Photo credit: Joan Marcus)

Frank Merlo was a handsome Sicilian-American actor from Louisiana who made a series of B-movie Westerns in the 1940’s but is best known as having been Tennessee Williams’ romantic partner for roughly a decade and a half. A wave of pre-World War II immigration had resulted in a line of Sicilian enclaves all along the Gulf Coast, including a neighborhood in New Orleans known as “Little Palermo.” That’s where Williams met Merlo, the man Frank Rich once called the peripatetic playwright’s “most devoted lover.”

It’s no grand revelation to note how deeply Williams’ art drew from his fraught personal life. He infamously battled drug and alcohol addiction, partially brought on by the tragedy of his schizophrenic sister Rose’s lobotomy and institutionalization. These all-too-real nightmares, along with his oppressed sexuality and parent’s myriad failings, overtly made their way into Williams’ works, especially the most well-known ones: The Glass Menagerie; A Streetcar Named Desire; Cat on a Hot Tin Roof. But it was Merlo’s family history that heavily inspired The Rose Tattoo, a scattershot romantic comedy that in 1951 won Williams his only Tony Award. Of course, as the play’s title suggests, even with Merlo as his muse, Williams could not completely divorce himself dramatically from his own past.

Broadway audiences must have been shocked that the same writer who gave them Amanda Wingfield and Blanche DuBois, two faded Southern belles living off their delusions and the supposed “kindness of strangers,” could also summon Serafina Delle Rose for The Rose Tattoo, a saucy Sicilian immigrant who has just enough of the old world left in her to fend off the new one. Living “somewhere along the Gulf Coast between New Orleans and Mobile,” Serafina begins the play as a prideful woman, thanks to her truck-driving husband’s hazy noble legacy and apparently not-so-hazy talents in the sack. The local women in Serafina’s tight-knit Sicilian community call her “baronessa,” in both envy and jest, as she boasts about her husband’s sexual prowess and the other gifts life has given her. Obviously, this will not end well.

Or will it? Those acquainted with the more-celebrated tier of Williams’ output, might anticipate not just Serafina’s descent but her relentless descent, which, as with Amanda and Blanche, could continue long after the author has written “end of play.” The Rose Tattoo, however, does not follow this pattern, because, uncharacteristically for Williams, it’s written with a sense of hope. As the hyper-Catholic, Madonna-worshipping Serafina might observe, that’s both a blessing and a curse. 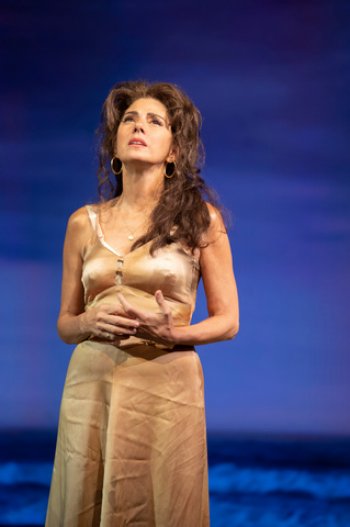 Marisa Tomei in a scene from the Roundabout Theatre Company’s revival of Tennessee Williams’ “The Rose Tattoo” at the American Airlines Theatre (Photo credit: Joan Marcus)

The problem is that what Williams knows about hope, and Sicilians for that matter, all comes second-hand, forcing him to significantly rely on clichés and stereotypes in The Rose Tattoo. So, yes, it’s not one of his best works, because it’s simply too inauthentic, both emotionally and culturally. But, despite these sometimes mortifying shortcomings, it’s still fascinating to watch Williams’ attempt to stretch himself creatively, and maybe even personally. Aside from some minor cuts, the Roundabout Theatre Company’s revival of The Rose Tattoo with Oscar Award-winning actress Marisa Tomei as Serafina mostly gives the audience what Williams wrote, an entertaining, if significantly flawed, play.

On an extended stage, Mark Wendland’s dreamlike set teems with life, sand, and plastic pink flamingos. Occasionally, as the large cast enters and exits, it’s difficult to comprehend if an actor is standing inside Serafina’s oddly spacious house, which appears to have a utility pole in the bedroom, or somewhere outside. Although it takes a little time to adjust to this visual jumble, it’s less a weakness than a poetic insight into Serafina’s soon-to-be troubled mind.

Framed by the unsettling constancy of the Gulf Coast’s lapping waves, eerily projected all around the stage by Lucy Mackinnon, Serafina’s world comes undone when a group of village women share the shattering news of her much-adored husband’s death, the stress of which causes her to miscarry their unborn child. While retreating into her grief, Serafina tries to take her daughter Rosa (Ella Rubin) with her. Strongly echoing the female despondency from his earlier works, it’s safe artistic ground for Williams.

But he doesn’t stay on it for long. Unlike those hapless Southern belles, Serafina appears to have a legitimate shot at spiritual, and sexual, renewal with the arrival of the strangely familiar Alvaro Mangiacavallo (Emun Elliott). Three years into her mourning, Serafina declares this gentleman caller to be the spitting image of her dearly departed husband, at least from the neck down. But he’s also clownish and unpropertied, with a ridiculous surname that suggests some ancient ancestor devoured an entire horse. 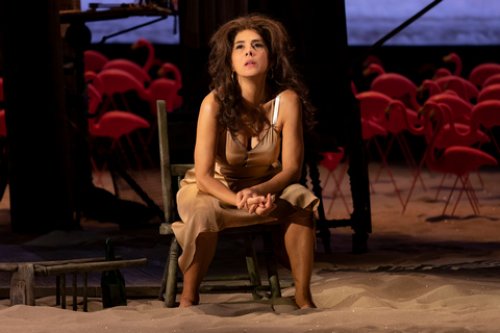 Marisa Tomei in a scene from the Roundabout Theatre Company’s revival of Tennessee Williams’ “The Rose Tattoo” at the American Airlines Theatre (Photo credit: Joan Marcus)

To be sure, Serafina and Alvaro’s romance is less than credible, but director Trip Cullman wisely commits to it completely, recognizing that Williams really hasn’t given him any other choice. Luckily for Cullman, he has the ebullient Tomei to portray Serafina and keep the audience from losing faith that the character’s happy ending is just over that lovely Gulf Coast horizon, no matter what miseries she’s endured.

The Scottish-born Elliott making his New York debut is also a charmer, adding dimensions to Alvaro’s personality that make him far more than just a chiseled physique (and he has a nice face, too, despite what Serafina says). It’s a shame that Alvaro doesn’t turn up until the second act, because the strong chemistry between Elliott and Tomei kicks the production into another gear.

Unfortunately, neither direction nor casting can do much for the rest of The Rose Tattoo, which includes a bunch of supporting roles that are underbaked, overdrawn, or just plain forgettable. Even a romantic subplot between Rosa and an oddly ascetic sailor (Burke Swanson) fails to generate much interest. But Rosa does get a line that seems to sum up all that Williams wants to say perfectfully: “Everybody is nothing until you love them.” Unexpected sentimentality may not be a lot to recommend a play, but, in Williams’ case, somehow it still seems like enough.