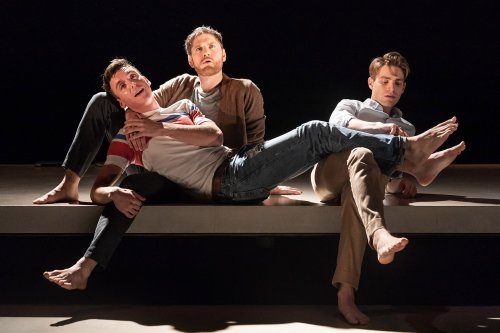 To paraphrase E.M. Forster’s most famous opening line, one may as well begin with playwright Matthew Lopez’s fascination with the novel Howards End. Discovering by accident that Forster was a closeted homosexual man who wrote the gay romance Maurice in 1913-14 but only allowed it to be published posthumously in 1971, Lopez understood why he liked Howards End so much: he saw it as the coded life of gay men that Forster could not write about in the Edwardian Age.

The result is his epic and extraordinary two-part play, The Inheritance which has arrived on Broadway after winning Best New Play Awards from the London Evening Standard and the Laurence Olivier Awards. The large cast of 14 includes the five leads from the London cast with the addition of theater legend Lois Smith in the role created by Vanessa Redgrave at The Young Vic. Engrossing, involving and extremely moving, The Inheritance also asks the question what is the responsibility that one generation owes to another. The accomplished actors make this a close-knit community of friends and a support group. 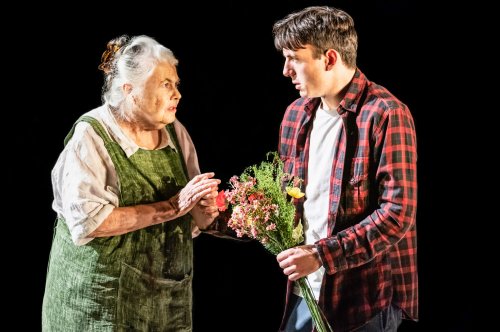 Lois Smith and Samuel H. Levine in a scene from Matthew Lopez’s “The Inheritance” at the Ethel Barrymore Theatre (Photo credit: Matthew Murphy for MurphyMade)

Lopez has cleverly found contemporary equivalents for Forster’s upper middle-class Edwardians in the gay community that he is writing about. The play begins with a writing class run by Morgan (Paul Hilton), a stand-in for E.M. Forster himself. One of the writers has a story to tell but does not know how to begin. Each of the characters then narrates the story including Morgan, talking directly to the audience or each other. Starting in the summer of 2015, we are introduced to lovers Eric Glass (Kyle Soller), a political activist, and Toby Darling (Andrew Burnap), a writer, (Forster’s Margaret and Helen Schlegal), who share Eric’s family’s prewar apartment on the Upper West Side of Manhattan. They are not married but Eric would very much like to be; however, Toby isn’t convinced it is for him.

They are members of a close group of friends who they see regularly, but have had a lapsed friendship with billionaire Henry Wilcox (John Benjamin Hickey) and his partner the spiritual Walter Poole (played Paul Hilton who also plays Morgan), (Morgan’s Mr. and Mrs. Wilcox). A chance meeting with Adam (Samuel H. Levine), a trust fund kid very much like the hero of Toby’s semi-autobiographical novel, Loved Boy, brings him into their orbit. When Adam is cast in the play version of Toby’s novel and he and Toby go off to Chicago for tryouts, Eric becomes close with Walter while Henry is away on business. 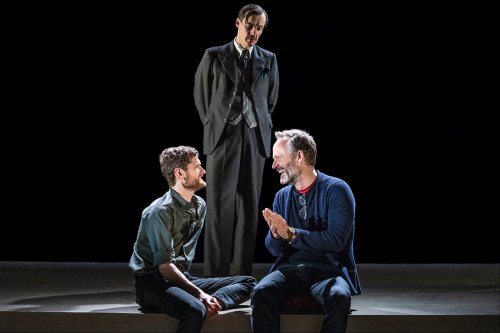 Walter confides that he has a farm upstate where he at one time brought friends dying of AIDS to make their passing easier, only to put distance between himself and Henry who believes that he was endangering their lives by bringing this virus into their house. Walter promises to take Eric to see it but he dies suddenly before this trip can occur. He leaves the house to Eric, his spiritual heir, but Henry and his sons Paul and Charles (just like in Howards End) refuse to honor the request which was written in pencil and not notarized. (When Eric finally does visit the house later on in the story he meets housekeeper Margaret Avery played by Lois Smith, Forster’s otherworldly Miss Avery, who has a heartbreaking story of herself and her son dying of AIDS.)

However, when the now famous and successful Toby falls in love with Adam who rejects him after Toby has moved out on Eric, he becomes a hedonist living only for pleasure, having lost most of his friends. One night he hires a hustler Leo (Samuel H. Levine again) who turns out to be the twin of Adam (a combination of Forster’s Leonard and his wife Jackie Bast) and Toby is smitten. While Toby spirals out of control as he introduces Leo to a rich and cultural life without making any commitments to him, Eric becomes close to the widowed Henry, a conservative Republican certain to tick off Eric’s friends, who eventually asks to marry him. Events spin out of control following along E.M. Forster’s plotlines in Howards End. The final scenes of each part of the play are so emotional that audible sobs can be heard in the audience. There are also flashbacks to Henry and Walter’s meeting 36 years early and some of their more emotional confrontations.

The title is used in many ways in the course of the play. Most obviously is the farmhouse in upstate New York that has been willed to Eric. When Eric and Walter first get to know each other, Walter confides in him his story of 1987 at the height of the epidemic when he finds himself caught up with their friends dying of AIDS and realizes that the five years he and Henry hid in the country was “an unforgivable act of cowardice.” Eric muses that the community that he came up in is fading away and wonders what happens to shared culture, “how else can we teach the next generation who they are and how they got here.” Toby criticizes E.M. Forster for having nothing to teach us because he “couldn’t possibly understand what it’s like to live in freedom, to demand choices for yourself.” Ironically, Lopez’s characters are going to prove in the course of the play that although they may not think that E.M Forster’s Howards End has anything to tell them, they are going to live parallel lives to his people.

Stephen Daldry’s brilliantly minimalist production uses nothing more than a raised platform (in Bob Crowley’s remarkable set) and a few props to tell this long layered story. As a result, no time is lost in scene changes as one sequence segues into the next. Later on in a coup de théâtre, we discover that the blank back wall opens to reveal the farmhouse, and a few other locations. The subtle lighting by Jon Clark focuses attention on the actors at all times. Crowley’s costumes have the younger members of the cast in changing casual outfits and bare feet, while the older cast members wear shoes, with the old-fashioned Morgan/Walter in a three-piece suit.

Under Daldry’s assured direction, one never feels that the cast is acting but playing themselves. Kyle Soller’s sensitive, upright, evolving  Eric becomes our guide into this group of friends, while Andrew Burnap’s Toby is the hedonist to the nth degree running away from a childhood he would like to forget. In the remarkable double role of Adam and Leo, Samuel H. Levine demonstrate tremendous range as he runs the gamut of emotions playing two very dissimilar men, one of privilege and one of depravity. In the dual role of the perceptive Morgan and Walter, Paul Hilton is always the soft-spoken, retiring gentleman that has connections to the original author himself.

As the billionaire Henry Wilcox who refuses to let himself get emotionally involved, veteran actor John Benjamin Hickey is a strong controlling authority figure, one who always gets what he wants. In her one scene, Lois Smith as the housekeeper Margaret Avery has a poignantly affective monologue which should be a shoo-in for a Tony Award nomination. The rest of the fine cast (Jordan Barbour, Jonathan Burke, Darryl Gene Daughtry Jr., Dylan Frederick, Kyle Harris, Carson McCalley, and Arturo Luís Soria) playing Eric and Toby’s close friends and other characters in the story add able support, making this a true ensemble. 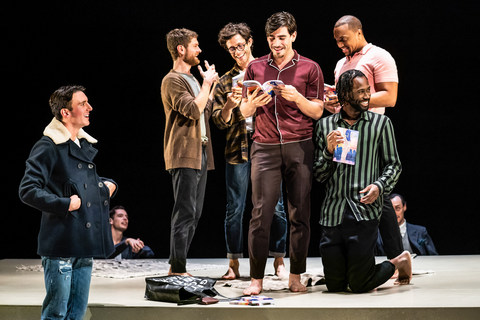 Matthew Lopez’s two-part The Inheritance with its extensive running time is a commitment but a theatrical experience that must be seen. Its timely themes make the story much greater than itself while telling an engrossing story of people we come to care about. While Forster’s novel declared in its most famous sentence, “Only Connect,” Lopez, in examining the question of inheritance, goes much further: what does one generation pass on to another and what responsibility is owed one to another. Its long story is like a great novel or mini-series that one does not want to come to an end.