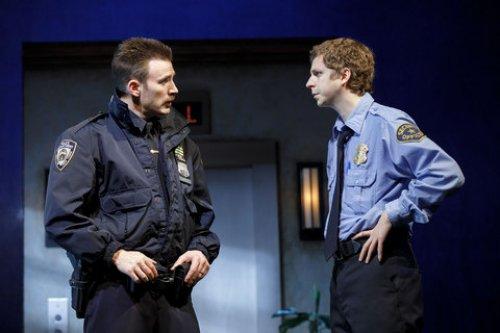 Chris Evans and Michael Cera in a scene from The Second Stage’s production of Kenneth Lonergan’s “Lobby Hero” at The Hayes Theater (Photo credit: Joan Marcus)

Ethical integrity versus moral turpitude is the theme of Kenneth Lonergan’s Lobby Hero now having its Broadway debut at The Second Stage’s newly renovated home, The Helen Hayes Theater. Although Trip Cullman’s production is very leisurely for at least the first half of this talky and long play first seen in New York in 2001, his quartet of impeccably cast players (Michel Cera, Brian Tyree Henry, Bel Powley and Chris Evans in his Broadway debut) have a field day with these ethically challenged police and security officers. Lobby Hero may appear at first to have a great many meaningless conversations, but it all becomes a tight web of intrigue as the tension rises in the second act.

Lonergan’s intricate plotting has many permutations of two-character conversations as the quartet changes partners, so to speak, in the course of four nights in November in and around the lobby of a middle-income high-rise in Manhattan. In another one of his iconic slacker roles, Cera plays Jeff, an insecure uniformed security officer in his late twenties working the graveyard shift after being kicked out of the Navy for being caught smoking pot. William, his humorless supervisor, a stickler for the rules, has taken him under his wing as he tries to build up his confidence and his sense of responsibility. Out on the street, Bill, an arrogant and self-assured police officer in his thirties on the list to make detective, is showing the ropes to probationer Dawn, also an insecure newcomer who is attempting to act tough as she idolizes her famous partner known as “Super Cop.” 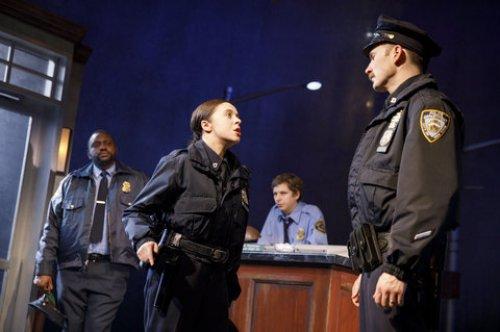 No one turns out to be who they appear to be on the surface. Although Jeff talks about doing the right thing, he sleeps on the job, grounds for getting fired. William is a man of integrity but what to do when his own relative is arrested for something he might not have done? As an African American, he knows that his brother may get lost in the system. Bill talks big about doing the job but he is visiting Jeff’s building to see Mrs. Heinvald in apartment 22-J while he makes Dawn cool her heels in the lobby. Things get complicated when William’s ne’er-do-well brother is arrested on suspicion of rape and murder and he wants William to give him an alibi. William tells Jeff too much and Jeff is incapable of keeping a secret. When Jeff tells Dawn that the lady in apartment 22-J has a lot of male visitors, Dawn becomes downright sarcastic to Bill but needs him to report on an incident in which she may have used too much force.

Japhy Weideman’s lighting puts the play in a perpetual twilight world.  Set designer David Rockwell (who also was in charge of the attractive refit of the Hayes) has designed the clever stylized lobby setting which revolves before each scene, giving us a new view after each turn. This mirrors one of the play’s themes: everyone sees everything from his or her own angle. Before the evening is over, each of the characters will have betrayed someone else and been betrayed as well. Aside from a great deal of humor, the hot button topics of sexual harassment, racial profiling and abuse of power raise their ugly heads, very prescient for a play originally presented in 2001. Integrity appears to be negotiable depending on your point of view.

While Cullman’s direction feels unhurried, he has obtained wonderful performances from his cast. Cera has patented the role of Jeff, the newbie security guard, the sort of person who rocks from foot to foot, giving away when he is lying or exaggerating. The role is a further riff on his role of Warren Straub in the 2014 revival of Longeran’s This Is Our Youth. In an excellent professional stage debut, action hero superstar Evans brings a sense of swagger as well as a little boy’s sense of fair play to his role of the corrupt Bill who always has a justification for his wrong actions. It is to be hoped that Evans continues to appear on our stages. 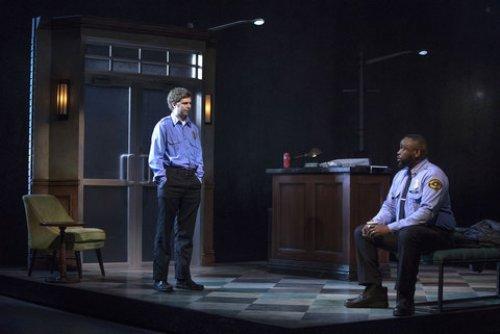 Henry who currently stars on FX’s Atlanta is pitch-perfect as William, a man of integrity who has never had to bend the rules until he is confronted with a situation that personally touches him. Diminutive British actress Powley who has appeared previously on Broadway in the 2011 revival of Tom Stoppard’s Arcadia captures the innocence, insecurity and fierce determination of Dawn, the police rookie only three months on the job. Her New York accent belies the fact that the actress hails from London.

Kenneth Lonergan’s Lobby Hero has stood the test of time, seeming more pertinent today that when it was first seen 17 years ago. Trip Cullman’s top-notch cast dig deep into their juicy roles bringing insight and perception. While the early part of the play will seem languid and insubstantial, it is only building towards a plot that ultimately packs quite a punch. The play’s moral compass leaves it up to each viewer to decide who the “lobby hero” is.