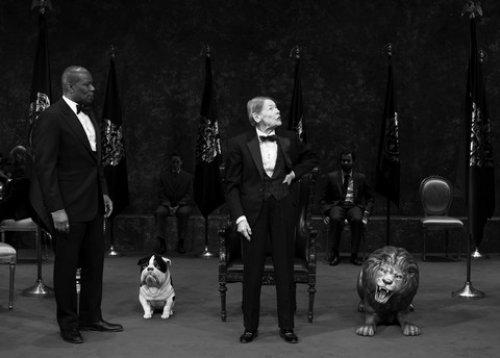 After having won the Tony Award for her performance as the queen bee in Edward Albee’s Three Tall Women last year, Glenda Jackson has returned to Broadway in the title role of Shakespeare’s King Lear. This is neither the same production nor the same director with which she returned to the London stage in 2016 after 23 years as a Member of British Parliament. American director Sam Gold follows his controversial and provocative modern dress productions of Othello with Daniel Craig at the New York Theatre Workshop in 2016 and his Hamlet with Oscar Isaac in 2017 with this uneven and even eccentric version of Lear which does not do Jackson any favors.

Miriam Buether’s unit set is an all-gold room with some elegant tables and chairs. It works for the opening throne scene. For later scenes, the tables and chairs are moved around. However, it always seems like the same location, having to make do for both indoor and outdoor scenes. The heath scene at the end of Shakespeare’s original Act II in which the now mad king goes up against the elements is performed before a gold front wall which encloses the set and serves as the curtain before each act. 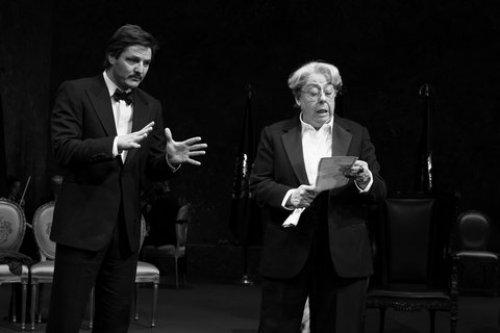 As this leaves the actors so little room on the apron, one worries about them falling into the orchestra seats. It sounded like the actors were hitting the wall to create thunder but this is probably not the case. The elegantly dressed onstage string quartet playing original music by Philip Glass is suitable for the court scenes but seems entirely out of place in the later outdoor and war scenes. Possibly they should have changed into something more casual for the play’s last two acts which occur after the intermission.

As the elderly king of Britain who deludedly decides to give up his kingdom to his three daughters, Goneril and Regan, the two older married ones, and Cordelia, his younger unmarried daughter, in exchange for their regaling him before his court with how much they love him, the 83-year-old Jackson dressed in Ann Roth’s fitted tuxedo and with a severe masculine haircut would seem believable casting. However in the first half of the evening (Acts I-III) which take about two hours, Jackson is nothing but haughty, sarcastic and arrogant, with little or no variety. In the production’s second half when the king who has been turned out of the castles of both married daughters (Cordelia having left the country to marry the King of France), Jackson seems mad but wise and more compassionate, turning the king’s anger on himself, but it is too little, too late. 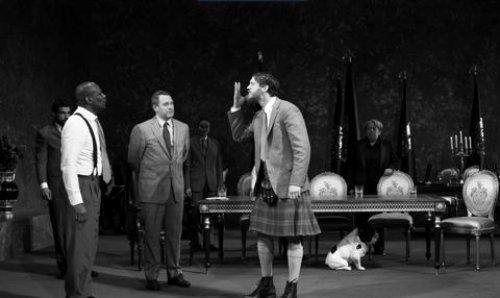 Elizabeth Marvel’s Goneril begins as a flattering, fawning sycophant and ends up as a contemporary socialite with lascivious longings. As her husband, the Duke of Albany who becomes the moral center of the play, Dion Johnstone, who has appeared in a great many other Shakespeare tragedies, is stalwart but bland, seemingly unable to control his wife. Aisling O’Sullivan is initially a deprecating Regan until she is alone with her husband, the Duke of Cornwall, and then it is obvious that they are codependents.

As a deaf Cornwall who uses the aide played by Michael Arden (director of the recent revivals of both Spring Awakening and Once on this Island) to translate in sign language for him, Russell Harvard is quite forceful, making his anger felt both as he pounds the table and when he finally speaks. However, why is he in a Scottish kilt and his wife has a similar accent to match? Not only is Cornwall as far away from Scotland as one can get, but neither Lear nor Goneril seems to come from anywhere near the border between England and Scotland. 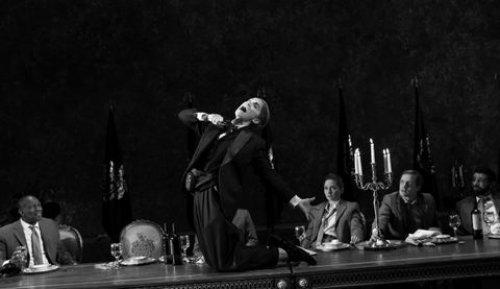 Ruth Wilson and the cast of “King Lear” at the Cort Theatre (Photo credit: Brigitte Lacombe)

One of Gold’s more unusual touches is to have British actress Ruth Wilson (Tony Nomination for Constellations, Golden Globe Award for The Affair) double as both Cordelia and the King’s Fool. At the performance under review, three older men who obviously had never seen the play before were heard in the lobby during the intermission saying that it showed how much Cordelia loved her father that she dressed up as his fool and followed the king around, certainly a logical conclusion in this production. Nevertheless, Wilson was a straightforward, principled Cordelia and a derisive, bitter Fool.

Gold has also cast the Earl of Gloucester, one of Lear’s two staunchest defenders, as a woman, actress Jayne Houdyshell, most identified with new contemporary plays. Although steadfastly loyal, Houdyshell is not entirely convincing as a man, more than a little naïve, and one wonders why she was not simply referred to as the Duchess of Gloucester instead. As the Earl’s two very different sons, Pedro Pascal as the revengeful illegitimate son Edmund is appropriately deceitful and cunning but rather one note, while Sean Carvajal (Signature’s Jesus Hopped the ‘A’ Train) as the legitimate heir Edgar is not only quite athletic being asked to run up and down the aisles but also shows great versatility. Veteran classical actor John Douglas Thompson as Lear’s other loyal supporter, the Earl of Kent, is rather tame as the only one to speak up in Lear’s defense. Dressing up as Caicus in disguise when he is banished from court as Kent, he looks not a bit different and one wonders why the other characters do not recognize him. 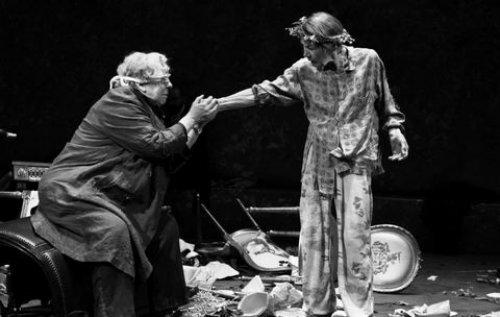 Jayne Houdyshell and Glenda Jackson in a scene from “King Lear” at the Cort Theatre (Photo credit: Brigitte Lacombe)

Among the supporting cast, Ian Lassiter as the King of France and Justin Cunningham as the Duke of Burgundy, suitors for Cordelia’s hand in marriage, immediately return after the opening throne scene as courtiers first to Goneril, then Regan, and finally as soldiers for the French army brought to Britain by Cordelia in order to rescue Lear in the final scenes. However, without any disguise or costume changes they are so recognizable that this is quite distracting to see them as courtiers to one set of royals and then another. On the other hand, Matthew Maher as Goneril’s trusty but nefarious servant Oswald always seems to have a sneer in his voice which suits his character admirably. For no explainable reason, Stephanie Roth Haberle appears as the Old Man in one of the late scenes, though obviously dressed as a woman. Jane Cox’s lighting is serviceable but not very atmospheric, a pity as the set offers so little in way of different locales.

Glenda Jackson in Sam Gold’s King Lear is never dull but like the  uneven production is never memorable except for the wrong reasons. At three and a half hours, this Lear is a commitment which offers great things but fails to live up to its promise. In this modern dress version, several of the more political lines get a rousing reaction from the audience, and the play’s dark chaotic world certainly reflects the times we live in. They say each generation gets the Shakespeare they deserve.

Running time: three hours and 25 minutes including one intermission