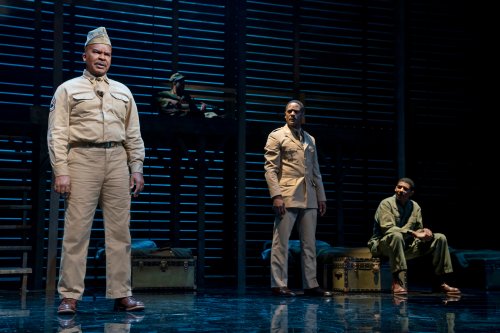 The original 1981 Off-Broadway production of Charles Fuller’s Pulitzer Prize winning A Soldier’s Play was presented by the estimable Negro Ensemble Company.  It featured a scathing performance by Adolph Caesar as Sergeant Waters, the character whose shocking murder opened the play with a bang—actually several bangs.  In that cast were several actors who would soon become household names:  Denzel Washington and Samuel L. Jackson.

Fuller’s A Soldier’s Play is a murder mystery tightly entwined in a dark drama of racial hypocrisy in the armed forces in 1944, still somehow relevant in today’s racially charged world.  It has been revived in its Broadway debut by the Roundabout Theatre Company at the American Airlines Theatre in a production directed by Kenny Leon (The Underlying Chris, Children of a Lesser God, Raisin in the Sun) featuring three well-known actors: David Alan Grier, Blair Underwood and Jerry O’Connell.

By opening with the vicious murder Fuller grasps the audience by the throat and doesn’t let go.  Rumors of Klu Klux Klan involvement or bigoted white soldiers’ hatred flow through Fort Neal, Louisiana, where black soldiers are segregated and forced to do menial work.

Jerry O’Connell and Blair Underwood in a scene from Charles Fuller’s “A Soldier’s Play” at the American Airlines Theatre (Photo credit: Joan Marcus)

Sergeant Vernon Waters (Grier in a performance that is simply too soft, more querulous than vicious) has it in for his own men whom he thinks are disgraceful representatives of the black race.  He engenders fear and hatred by his sadistic treatment of these men under his watch, even though they manage to do him and the camp proud as representing the camp with their tremendously successful baseball team.

So awful is his manner that one of his soldiers, Private C.J. Memphis (J. Alphonse Nicholson, moving as he falls apart emotionally), an easygoing, jive talking young man who rubs Waters the wrong way, commits suicide, complicating the search for Waters’ assassins.  Adding to the suspect list is Private James Wilkie (Billy Eugene Jones, quietly brilliant) who was stripped of his corporal stripe by Waters.

Captain Richard Davenport (Underwood in a calm, yet emotionally fraught performance), a rare black officer, is sent to help solve the case.  He is confronted with Fort Neal’s white Captain Charles Taylor (O’Connell, more petulant than deep) as he seeks the truth. 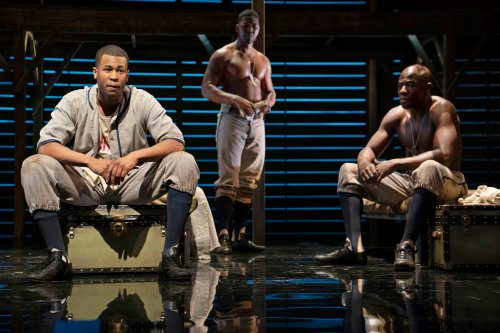 Davenport uncovers the many abuses Waters has inflicted on his soldiers including the beating of Private Melvin Peterson (Nnamdi Asomugha, smoldering with anger), giving Peterson a reason to hate Waters.

As Davenport infiltrates the camp he comes across multiple suspects—whites and blacks—and finally discovers in an exciting twist who the killer is, A Soldier’s Play offers a disturbing portrait of racial tension and hatred that echoes down through the decades.

The production is hobbled by Derek McLane’s awkward, wood-framed set that has the soldiers constantly pushing their cots back and forth to change scenes.  Dede Ayite’s costumes appear to be period perfect and Allen Lee Hughes’ lighting does what it can filtered through the complex, shadow-filled set. 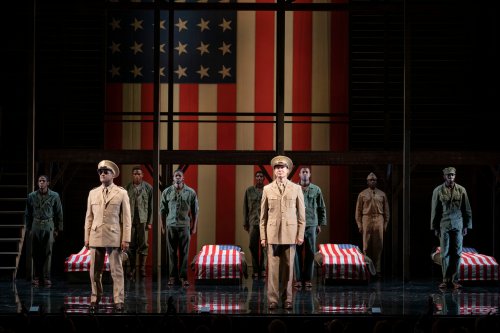 Leon’s direction brings out more emotional depth from the actors portraying the lower echelon soldiers than the three stars, as if they were in a different play than the leads.

Perhaps today’s audiences have been overwhelmed by television crime shows and dulled by the continual news of a “post racial” society, but A Soldier’s Play, while still a well-written drama, doesn’t register as strongly as it did back in 1981.