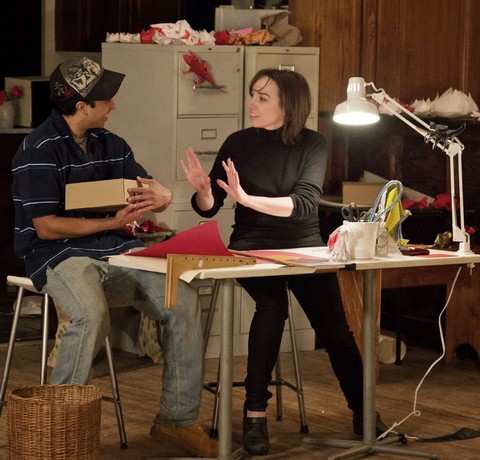 Maneesh Sasikumar and Nairoby Otero in a scene from Rajiv Joseph’s  “Animals Out of Paper” (Photo credit: Shara Friedman)

With only a few days until Valentine’s Day we are surrounded by constant reminders of humanities obsession with being loved and understood. Quite timely, and unapologetically, YOLO! Productions has brought us a piece of theatre concerning the affairs of the heart. You won’t be able to help but fall in love with the revival of Rajiv Joseph’s Animals Out of Paper as directed by Merri Milwe. Trust us you’ll love the writer for the corny folding analogies and forgive him for the unsubtle appearance of an origami heart in this quirky tale of humanity’s capacity for love.

Enter the working studio of Origami master Ilana, played by the stunning Nairoby Otero, a woman who is tasked under medical contract to fold the crease paper for a heart sleeve but has given up on folding and buried herself under piles of Chinese takeout cartons. The heartbreak resulting from a broken marriage, the untimely disappearance of her dog, and the journey back into loving yourself is truly touching, genuine, and so truthfully acted by Otero, a true theatre star.

Joining the cast is the adorably nerdy and completely smitten calculus teacher-com-Origami enthusiast Andy (David Beck) who never fails to make you laugh as he barges into Ilana’s life to collect membership dues for American Origami. Here Joseph’s Pulitzer Prize-nominated writing prowess revel, to the delight of fans of his earlier theatre including Bengal Tiger at the Baghdad Zoo, as the man stumbles over his affections and admirations with a lovable innocence. Apparently reading Ilana’s origami book hundreds of times is not a restraining order worthy obsession but the grounds for a blossoming romance.

To add another layer to this masterpiece, enter Suresh played by Mannish Sasikumar: “People have more than two sides.” The hip-hop spouting, adolescence-fueled, temper child that society would often disregard on second glance and through brilliant acting reveals to us a life of pain in a troubled home and a child simply longing to be acknowledged in something. Throw in the character’’ obsessions with folding paper animals and a clever stage change in a trip to Japan and you have the beginnings of a risqué love triangle and a stunning night of theatre.

Accolades must be given to the set design team (Ran Xia, sets; Claudia Toth, lighting) creating a humble studio that brings to life the artistic environment of the origami master. The experience in the theater is raw and beautiful, the intimacy of the space leans on your sensitivity and compassion and will make you wish to rush forward and embrace Sasikumar, Otero, and Beck alike. 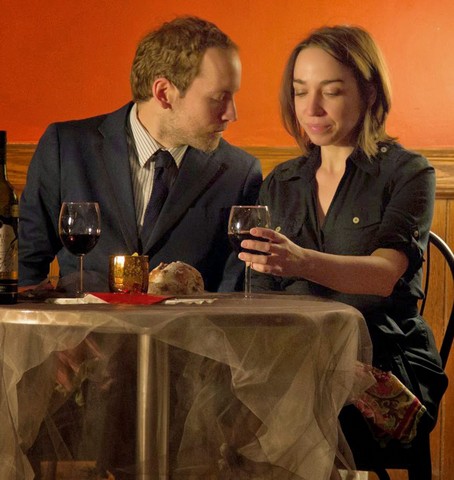 David Beck and Nairoby Otero in a scene from Rajiv Joseph’s “Animals Out of Paper” (Photo credit: Shara Friedman)

Humans, rather like animals find an odd resemblance to a clean sheet of origami paper. We start with “no memory, … just flat” and eventually we become “twisted into something so far from what (we) used to be” that we no longer remember our innocent selves who like Andy at the beginning of the play had previously “never been hurt. Not really.”

If you’re looking for a real love story stripped of grandiose circumstance and pretense, then this is it. Like paper you “can unfold and be flat again” but your life will “never be what it was.” My own page has been folded as I fell in love with these characters and I feel all the richer for having been welcomed into the world of YOLO! Productions’ Animals Out of Paper.

For the record, the original Off-Broadway production ran at Second Stage Theatre in August 2008 and featured Kellie Overbey (Ilana), Utkarsh Ambudkar (Suresh), and Jeremy Shamos (Andy) and was directed by Giovanna Sardelli.

YOLO! Productions and The Great Griffon