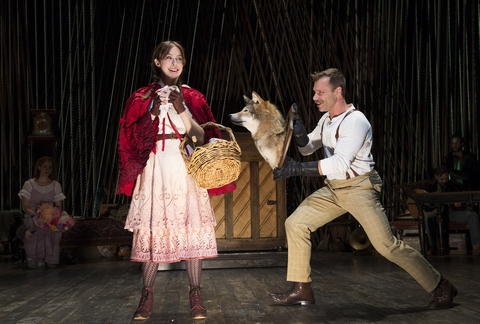 Emily Young and Noah Brody in a scene from Fiasco Theater’s “Into the Woods” (Photo credit: Joan Marcus)

Why another stage production of the Stephen Sondheim-James Lapine Into the Woods while the film version is currently playing? The Roundabout Theatre Company is hosting the ingenious, clever and witty Fiasco Theater production (previously seen at the McCarter Theatre Center in 2014) of this iconic musical using fairy tales from the Brothers Grimm which is the best musical revival in town. This is what every revival should be – a reinvention of the original material making it new enough that it wipes out memories of the original. If you did not see Fiasco’s six-character version of Shakespeare’s Cymbeline which had an extended run Off Broadway in 2011, then you are in for a delightfully surprising treat.

Directed by the resourceful team of Noah Brody and Ben Steinfeld (both of whom appear in the production), the Fiasco version uses only ten actors, most of whom double in two or three roles, as well as play musical instruments when they do not appear in a scene. Derek McLane’s unit setting (which has piano tops around the proscenium arch and a back wall made up of crisscrossed ropes to represent the woods) includes all of the props, furniture and costumes needed on stage for the quick segues from one scene to the next. The effect is of an attic chockfull of the memories of childhood. Center stage sits musical director Matt Castle who plays the entire score on a piano to new orchestrations by Frank Galgano and himself and is accompanied at various times by actors on cello, bassoon, xylophone, tuba, trumpet, guitar, banjo, etc. While this suggests director John Doyle’s controversial technique in his revivals of Sweeney Todd and Company, here it is entirely in keeping with the production style, rather than an intrusion or needing suspension of disbelief.

In its original production, it was assumed that Into the Woods was about theories of children’s reactions to fairy tales suggested by Bruno Bettelheim. However, now it becomes clear after the New York revivals of 1997 and 2012 that the show is about bad parenting and dealing with the consequences of one’s actions. Fiasco’s version eschews the original script’s one narrator in favor of having all of the actors take turns narrating – which is totally in keeping with the production’s story theater technique. Starting with the opening line, “Once upon a time, in a far-off kingdom…,” we are introduced to Cinderella who wished to go to the King’s Festival, Jack who wishes that his beloved cow Milky White would give milk, Little Red Riding Hood who wishes for bread to take to her grandmother, as well as a new connecting story of the childless Baker and his Wife who wish to have a child.

When the Witch who is the Baker’s neighbor reveals that their infertility is caused by a curse she placed on the Baker’s family when she caught his father stealing six magic beans from her garden, she also tells them that the curse can be lifted if they can find the cow as white as snow, the cape as red as blood, the hair as yellow as corn and the slipper as pure as gold, before the chime of midnight in three days’ time. This is the beginning of the adventure into the woods: Jack to sell his cow at market, Little Red Riding Hood to visit her grandmother, Cinderella to get to the Festival, and the Baker to try to find the four items, refusing his wife’s help, but she eventually follows.

Along the way we meet Rapunzel in her tower (kidnapped by the Witch), Cinderella’s Prince, the Wolf who accosts Red Riding Hood, a Mysterious Man whose function is not revealed until the end, and we also hear about Sleeping Beauty and Snow White. While the first act takes us to the happily ever after endings of the original fairy tales, the second act is much darker showing us the unhappily ever after and the eventual attack on all of them by the Giant that Jack has stolen from. By the end, it is clear that all of the parents have made poor choices and that their children have had to live with the consequences of those choices. 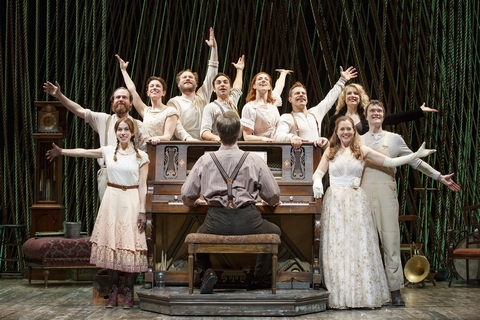 The Cast of “Into the Woods” (Photo credit: Joan Marcus)

Part of the fun of the show is the use of ordinary objects as props: a ladder becomes Rapunzel’s tower, a pair of curtains on a rod is used as the gowns for Cinderella’s stepsisters, a handful of thrown paper becomes the birds in flight, a dressmaker’s dummy becomes a tree in the forest, two broomsticks become horses. The doubling is also clever: the lascivious wolf is wittily played by the muscular Brody who also appears as Cinderella’s seductive prince complete with a luxuriant walrus mustache. Burly Andy Grotelueschen is an amusing Milky White, his bovine nature suggested by a bell around his neck, as well as Rapunzel’s rather dim-witted Prince. The Princes’ famous duet, “Agony,” remains one of the highlights of the show. Both actors play Cinderella’s two wicked step-sisters with tongue-in-cheek aplomb. Liz Hayes plays the two domineering older women, Cinderella’s haughty and disdainful stepmother and Jack’s officious and bossy mother.

As in the previous New York productions, the resourceful Baker’s Wife proves to be the best role and Jessie Austrian makes the most of it as well giving outstanding renditions of “Maybe They’re Magic,” “A Very Nice Prince,” “It Takes Two,” and “Moments in the Woods.” Jennifer Mudge is a memorable Witch both before and after her transformation and gives impassioned performances of “Our Little World,” “Stay with Me,” “Witch’s Lament,” “Last Midnight” and her lead-in to the finale (“Children Will Listen”). As the Baker, co-director Steinfeld gives a solid but bland performance.

Claire Karpen is a charming Cinderella, artless yet wise, capable yet curious. Her totally different Granny is of a much more mature and experienced woman. As Red Riding Hood, Emily Young is hilariously pert and impertinent, while her Rapunzel is a much more romantic, emotional woman. Patrick Mulryan shows tremendous versatility as the dim-witted, naïve Jack, while also making his Stewart to the Prince uproarious as a very patronizing, haughty retainer. Whitney Locher is responsible for the droll and imaginative costumes. Musical director Castle at the piano with help from the rest of the cast on other instruments gives a first-rate interpretation of the reduced score.

Along with its ingenious story theater devices, there is brief, amusing audience participation. If you neglect to see Fiasco Theater’s production of Into the Woods, you will simply be missing the most inventive, cleverest and wittiest revival in town. If you are already a fan and can’t get enough of Fiasco’s take on theater, look for their The Two Gentlemen of Verona at Theatre for a New Audience starting on April 24.