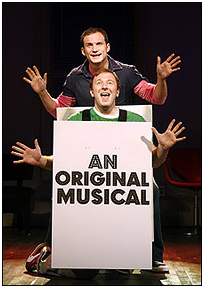 Hunter Bell, scruffy, cheerful, reddish blond, and Jeff Bowen, tan, taut, wary, a perfectly normal pair of forty-ish gay buds (well, as normal as any theater folk are) realize they have absolutely nothing going on so they set out to create a musical in three weeks and then put it on Broadway. They proceed to do it right in front of us: what they say becomes the show’s dialogue and Jeff composes songs then and there. When they start to write Heidi’s and Susan’s dialogue, Heidi Blickenstaff, tall, zaftig, gorgeous, and Susan Blackwell, slender, full of untold grace and graces, appear. We’re in the midst of the musical, still nameless, still set-less, but we have four chairs and four actors and that’s enough. Enough for Broadway? Yes, indeedy and you can say that again. Yes, indeedy.

The childlike simplicity of their ambitions and motivations and the plunge into performing, creating as they go, is not quite leavened by their realities; each of them still has to make a living in spite of the fact that they are becoming more and more absorbed in the utter, magical nonsense of building their show out of whatever they are doing and saying and singing. It’s warm, it’s hilarious, it’s mesmerizing. It taps into the untold dreams of everyone in the audience watching, the rooters, the envious alike. Schadenfreude hangs like a vampire, as in one of their best songs, but when their anxiety and tooth grinding become too much for us we are comforted by the fact of their actual presence: there they actually are, performing on the Lyceum stage, dream come true. There is a rainbow, there is a god, there is a happy ending. We love them all. That’s the crazy, hope ridden, infantile world of show biz. (We’re not talking money here.) We have progressed from song “Two Nobodies in New York” to song “Nine People’s Favorite Thing”, the journey in front of our eyes and ears and hearts. Spelled out in songs and dances and dialogue as it happens, all their ups and downs, and it’s grand.

Hunter’s book and Jeff’s music and lyrics have been winningly directed and choreographed by the remarkable Michael Berresse, taking Hunter and Susan and Jeff and Heidi everywhere they wanted to go. The four of them are a cornucopia of theatrical gifts gilded with the glorious hopes of adolescence still completely retained by their older, if not wiser, selves. The juxtaposition is at once deeply touching and laughingly joyful. Larry Pressgrove as their entire orchestra is endearing, especially when he is allowed dialogue. Production values are subtle at best. Set designer Neil Patel has given them a box which might just as well have been taken away. And guess what happens. As for Chase Tyler’s costumes, it is to laugh: those are actors in their own clothes, just look at them, they are so right, only partially taken away, when Hunter gets a brainstorm. The silky lighting by Ken Billington and Jason Kantrowitz does its job so well you just expect it. So are they all where they belong? Yes, indeedy. (title of show) is the little treasure that could.