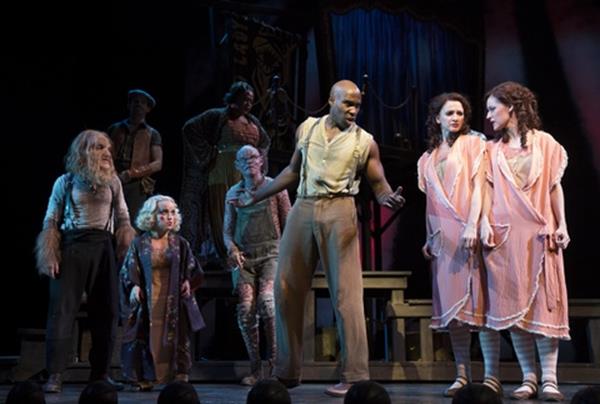 See this show. Forget what you may have heard or assumed about the story, really just go. I can’t guarantee you’ll like it, a few of you might even hate it; but for all its messes and missteps, it combines a heart as big as all outdoors with the exact opposite of the franchise-driven theme-park mentality that is always threatening to swallow Broadway whole.

There are a lot of words being wasted on what this show is not. This argument occurs because book writer and lyricist Bill Russell and composer Henry Krieger brought it to Broadway in 1997 without figuring out what story it was trying to tell. This new Side Show is a very substantial rewrite. It’s no longer sung-through, it has additional material by director Bill Condon, as well as lots of new songs; so let’s leave the argument aside, and discuss what you actually see on the stage.

Side Show begins in the mid-1920’s, and tells the story of twins Daisy (Emily Padgett) and Violet (Erin Davie). They’re joined at the hip, what used to be called ‘Siamese Twins’, and seem to have few prospects beyond spending their lives in a traveling side show run by their exploitative legal guardian, a man known as Sir (Robert Joy). Then hope enters their lives in the form of promoter Terry Connor (Ryan Silverman) and song-and-dance man Buddy Foster (Matthew Hydzik). Terry is smooth but sincere, Buddy is skeptical but game, and they really do like the girls, whom they pry away from Sir and shape into a well-paid vaudeville act.

Through all this the girls take their physical challenge for granted, naturally. They have divergent personalities, which is a little trickier (Daisy is the sociable one, her sister a bit of a shrinking…Violet). Worse than these problems by far is constantly being seen as freaks, rather than people, and overcoming that oppression is the true subject of the story.

How this is established, even before the sisters make their first entrance, is worth a close look.

At rise we are in the side show itself. (The scenic design by David Rockwell features typical posters for the attractions, where “typical” means the nightmare Expressionism of Oskar Kokoshka.) Sir enters and sings “Come Look at the Freaks,” wherein he enumerates the members of his ensemble. At first they seem standard-issue: the bearded lady (Blair Ross), the three-legged man (Brandon Bieber), the tattooed girl (Hannah Shankman). The latter seems anomalous, tattooed girls being rather common these days.

Next comes the geek (Matthew Patrick Davis). His extraordinary full-head mask is the first of several to come (by wizards Dave Elsey & Lou Elsey). Equally notable, however (because it’s not stage trickery) is Mr. Davis’s 6’8″ height, and now you might suspect this production is mulling over what it means to be called a freak. But we move quickly on to the Lizard Man (Don Richard, in the second elaborate mask), followed by the hermaphrodite (Kelvin Moon Loh).

This is another moment that drags us into the 21st Century, and in a good way. We don’t see the usual “half-man, half-woman” silliness, we see anachronism, a modern transwoman in an odd costume. Then it’s back to the routine again, with the Dog Boy (Javier Ignacio, the third full mask) and the ‘armless’ “Venus di Milo” (Lauren Elder).

The coup de grace comes with the “World’s Tiniest Cossacks” (Jordanna James and Josh Walker). The intent here is, finally, completely unambiguous: the others we have seen may be unfortunate, or present themselves in ways we find disturbing; but these people are merely small, and the effect is chilling. They know it, too.

The creators have one last trick before we meet the girls: the “Cannibal King” (David St. Louis), his real name Jake, his real role The Scary Negro. There’s a bit of sham menacing, followed by sham submission to the white roustabouts. And then Daisy and Violet are revealed, singing a simple vocalise, and the scene is over. 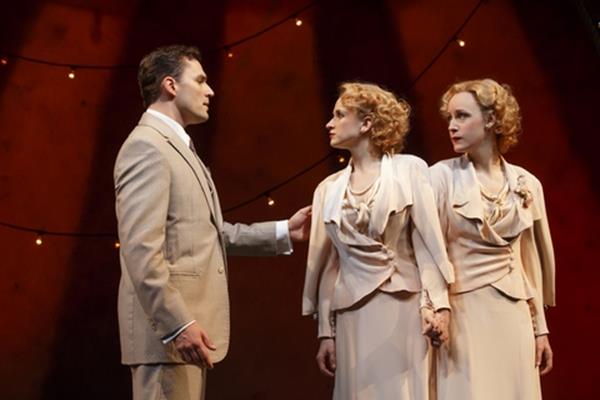 So now we meet the ‘normal’ people, Terry and Buddy, who finagle a little private time with the twins. The ensuing heart-to-heart gives us the twins’ I Want song, in which they explain that they most want to be “Like Everyone Else.” This is one of the better lyrics in the show, drawing out that both Daisy’s interest in fame, and Violet’s preference for quiet, are equally “what everyone wants.”

By the end of Act 1, the girls are on the road with Terry and Buddy, plus the kind-hearted Jake as roustabout. They’re performing for good money, but alas, they still get no respect from society. As for tenderness, Buddy’s feelings for Violet seem oddly dispassionate, and though Terry likes Daisy a lot, we realize he finds the omnipresence of Violet a deal-breaker. How these two currents play out is the stuff of Act 2.

Hopefully it’s clear by now that this is a story worth telling, and Russell, Krieger and Condon clearly love every one of their characters, warts and all, and that keeps the show flying. Now some carping: there are some really terrible lyrics, which fortunately can’t kill the power ballads that close the acts. There’s a flashback sequence in Act 1 which is far too long. Terry’s insistence that he would be happy with Daisy if only Violet weren’t there makes no sense psychologically. The twins behave nothing like actual conjoined twins. Okay, carping’s over.

The characters who fill out the story are played by the side show actors, with featured song spots for Ignacio as Houdini and Ross as Auntie (both in the big Act 1 flashback). Ignacio in particular delivers his song “All in the Mind” well, almost getting us to forget that the thing needs cutting.

Silverman, so excellent in last season’s Passion, delivers the goods here as well. Hydzik doesn’t have much to work with here (it’s a very passive character, and I don’t mean passive-aggressive), but he manages it. St. Louis makes a much stronger impression because his character is more passionate about the girls and their fate. (One wishes his songs sounded more 1930’s and less 1950’s, but you can’t have everything.)

As for the leads, while Padgett and Davie are totally believable within the ground rules of this story, their voices are not thrilling us as the roles require. As actors they radiate love for each other, but we need to fall for them hard the moment they open their mouths to sing, and we don’t. Their unisons are often imperfect, and their phrasing doesn’t always match exactly, which suggests the problem is that they’re not listening to each other as carefully as they should.

At the risk of being reductive, there’s one small detail which may be making a big difference in how we ‘read’ the leads. The twins’ costumes (by Paul Tazewell) are often beautiful, frequently brilliant, and always mirror images of each other. This draws our attention to their connection, as well as accommodating it. But the beautiful wigs (by Charles G. LaPointe) are also mirror images, and this inadvertently emphasizes how different Padgett and Davie’s faces really are. If they were identical rather than mirrored, it would make them read far more like actual twins.

Speaking of costumes, there’s one fabulous quick change during the opening number of Act 2. It’s set up so perfectly that you’ll wish you could go back and see it a second time. Lighting design by stalwarts Jules Fisher and Peggy Eisenhauer was often spectacular.

This show is having some trouble finding an audience, partly because the premise sounds gimmicky and voyeuristic: “It’s about these Siamese twins.” A better way of explaining it would be “Did you ever feel like a freak?” Because most of us have, and that’s who this show is for.