The world premiere of The Apple Boys: A Barbershop Quartet Musical is a delightful show that pays tribute to this uniquely American art form. In a mash-up of history it also recognizes a great many famous New Yorkers placing them at Coney Island or Central Park at the same time. With a clever book by Jonothon Lyons (one of the quartet of talented actors who appear in the show) and melodic music and lyrics by Ben Bonnema, The Apple Boys is great fun with ample puns that almost get by you, accomplished close harmony by its cast of four playing all 40 characters, and a plot so far-fetched that it could have been true in the manner of tall tales.

The story is narrated by Jack Chapman III (Jelani Remy, baritone), grandson of Johnny Appleseed and heir to the largest apple orchard South of Queens, currently run by his Uncle Howie. When his uncle tells him of the bumper crop of apples that needs to be harvested, he is sent to Coney Island to hire more men at the Central Employment Station. There he encounters Nathan Handwerker (Teddy Yudain, lead singer) who dreams of having the best Hotdog stand on the boardwalk, Warren Lincoln Travis (Lyons, bass), who holds the unofficial title of “The World’s Strongest Man” who has been sidelined by an accident, and Hank Beecher (Amanda Ryan Paige, singing tenor) who wishes to build the world’s first looping roller coaster, but is fired from his job on the Coney Island Cyclone after causing a car to derail.

Jack suggests they sing on the job and they discover that in close harmony they make a great barbershop quartet. When Jack receives a letter from landlord John Jacob Astor IV that the Howard’s Superior Apple Orchard has only four weeks to pay land fees in the amount of $5,000, the men decide to compete in the July 4th American Ballad Contest for Amateur Barbershop Quartets. 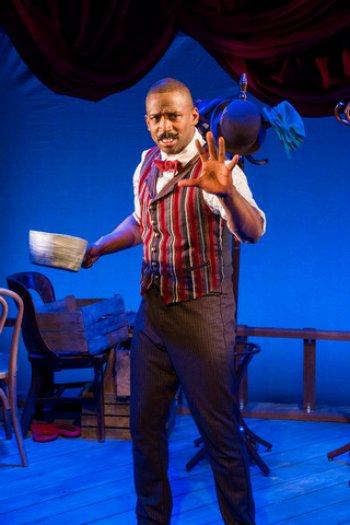 The only problem is that the other men have other contests that same day: Nathan has the Coney Island Cook Off which offers as prize a prime location on the boardwalk; Warren has his rematch with his rival John B. Gagnon (“Gagnon the Great”); and Hank has the sandcastle contest that is run by his old boss Vernon Keenan who he hopes to interest in his looping roller coaster. Although Nathan misses his anniversary night with his wife Ida at the Elephant Hotel and various other things go wrong, all works out in the end – with one surprising exception.

Bonnema’s score includes both a Capella songs as well as those accompanied by expert pianist Rona Siddiqui who occasionally appears on stage as one of the characters. Additionally Jack has a forceful and plaintive solo, “My Own Two Hands,” while Nathan and his wife Ida have an amusing duet about the dangers of the ballad contest while he has a business to run. Standouts are the two subway songs used as audition entries for the contest, The Apple Boys’ laudatory “Heaven by Train,” and the rival Note Takers’ opposite take on turn-of-the-last-century trains, “Bumpity Bump.” The varied and witty musical numbers are mainly tributes to New York City, circa 1900. There is never a sense of the songs being too much the same as there often is with a series of barbershop quartets.

Director David Alpert has obtained a great deal from his quartet of actors who are often required to play both sexes and change roles on a dime. The charming and personable cast each play the members of Jack’s barbershop quarter as well as many other characters they meet along the way in their adventures. Although there are no costume changes in Lindsay McWilliams’ designs aside from their colorful vests and red bow ties, the actors literally switch hats (bowler, boater, top, ivy, Edwardian, cloche, etc.) which gives them the needed look for the other characters. Jelani Remy, recently in the revival of Smokey Joe’s Café, has a cheerful, upbeat presence as the narrator/hero, as well as amusingly depicting the capable and practical Ida Handwerker, the wife of the eventual founder of Nathan’s Famous Hotdogs. As Nathan, Teddy Yudain is comically neurotic and agitated, while his strong man John B. Gagnon is a pillar of strength.

Jelani Remy as Ida and Teddy Yudain as Nathan in a scene from “The Apple Boys: A Barbershop Quartet Musical” (Photo credit: Richard Termine)

Bookwriter, Lyons plays muscle man Warren Lincoln Travis with phlegmatic stolidity, while he also plays the sarcastic Vernon Keenan, the designer of the Cyclone Rollercoaster. Amanda Ryan Paige has the most difficult role playing Hank Beecher, tenor of the Apple Boys, but switches neatly to upper-class Alva Vanderbilt Belmont, prominent socialite and suffragette, with the addition of a hat and veil.

The men also appear as Governor Alfred E. Smith, Mayor Fiorello LaGuardia, and Commissioner Robert Moses. While these historic characters were not contemporaneous, we are warned early on by Uncle Howie to expect to encounter “historic inaccuracies.” All four additionally play the members of The Note Takers barbershop quartet, their deadliest rivals, with smug assurance, as well as all of the other contestants in the American Ballad Contest on July 4th. Starlet Jacobs’ minimalist setting which looks like an old abandoned theater makes excellent use of a ladder and a chair and the imagination fills in the rest, while Rui Rita’s subtle lighting does its own magic.

The Apple Boys: A Barbershop Quartet Musical is a surprisingly entertaining tall tale that makes excellent use of this uniquely American art form. The talented and hard-working cast brings to life 40 characters from turn-of-the-last-century New York, often without catching a breath. The musical is also a valentine to the Big Apple from Coney Island to Central Park and with its references to many famous New Yorkers. At a swift 80 minutes, The Apple Boys is a most diverting musical evening in the theater.

The Apple Boys: A Barbershop Quartet Musical (through December 23, 2018)

1 Comment on The Apple Boys: A Barbershop Quartet Musical