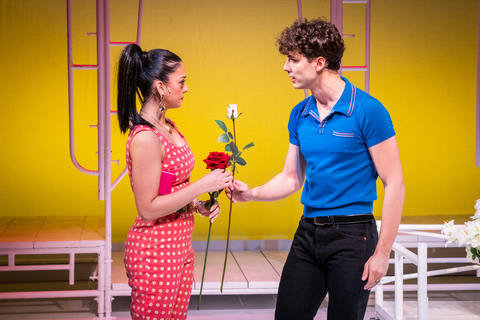 Take a bit of Shakespeare, toss in some classic Italian tunes, sneak in themes from The Godfather films and there you have the ingredients of the new musical Romeo & Bernadette: A Musical Tale of Verona & Brooklyn now effervescing on a stage at the A.R.T./New York Theatres.

Romeo & Bernadette, a fresh take on Shakespeare’s oft-adapted tale of love, is an unabashed valentine to inter-era romance.  Shakespeare’s Romeo (cutie-pie Nikita Burshteyn, perfectly cast) is magically time-travelled to 1960’s Brooklyn to seek Bernadette (beautiful Anna Kostakis who plays both the foul-mouthed Bernadette and the demure Juliet), a striking doppelganger of his beloved sixteenth century Juliet.  There he meets members of two rival Italian mobs who substitute, 1960-style, for the Capulets and Montagues.

Written by Mark Saltzman (book and lyrics) with many witty allusions to the original, R & B flows from one laugh to another.  The songs are set to classical Italian tunes from such composers as Enrico Cannio, Paolo Tosti, Tomasso Giordani, Ruggero Leoncavallo and even Vincenzo Bellini.  Brilliantly re-orchestrated and re-purposed by Steve Orich, the music smartly plants the songs in both eras while Saltzman’s lyrics perfectly render the characters’ idiosyncrasies and keep the plot humming along.  The score is vividly played and sung under the baton of music director, Aaron Gandy. 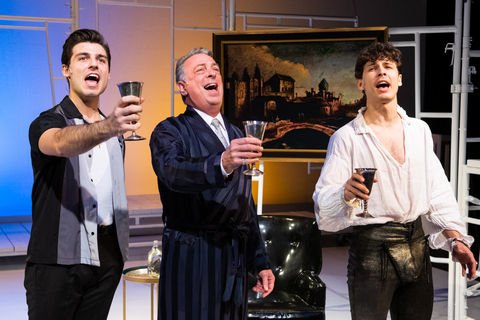 R & B opens on a performance of R & J before a very bored Brooklyn audience.  “Die, Already” they sing as the two lovers are in their death throes.  To impress his girlfriend Brooklyn Guy (later Dino Del Canto, son of mobster Don Del Canto) is reluctantly attending this play.  As the Brooklyn Girl (later Donna Dubachek, Bernadette’s best friend and maid of honor in her upcoming wedding), swoons at the romantic, but vastly overacted scene, Brooklyn Guy persuades her in song that “There’s More,” uprooting Romeo from his death scene to contemporary Verona where all his adventures in a modern world begin.

Vacationing in Verona, mob boss Sal Penza (humorously played by Carlos Lopez), his lovely, but pretentious wife Camille (Judy McLane, who mines the role for all its subtleties) and his lovely daughter Bernadette each find what they want in this classic Italian town.  Camille enjoys opera while Sal just wants to rest.  Bernadette, spoiled child that she is, wants to do nothing but shop.  While shopping she runs into the now loosed Romeo who falls for her immediately in the “Bernadette Duet.” 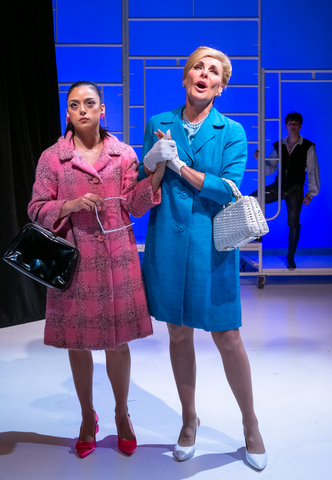 When the Penza family leaves Verona, Romeo wangles his way to Brooklyn where the plot, as they say, thickens.

Spoiled, rude Bernadette is engaged to the super-macho Tito Titone (Zach Schanne, smartly managing to avoid cliché) who treats her terribly, just the opposite of the overly romantic Romeo who finds her and invades her life.

Romeo is befriended by Dino Del Canto (Michael Notardonato, whose dark good looks belie his sensitivity) and drawn into the household of Don Del Canto (an elegant Michael Marotta), putting him in the home of the enemy of Bernadette’s equally powerful Penza family.

Bernadette is beguiled by Romeo who adopts modern dress, losing the codpiece and who tosses lines of poetry at her, that is until she thinks he is in the Del Canto mob.  She obsesses with her gal pal Donna (a delightfully daffy Ari Raskin) over her two suitors.  Also beguiled is Camille for whom Romeo is a genealogical guide. 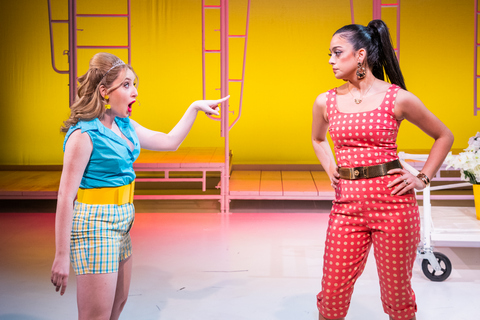 Romeo acts as the catalyst for a series of near violent confrontations which, of course, all get smoothed out in a happy ending in which each character gets what he or she deserves, including the Brooklyn Boy and the Brooklyn Girl who started the whole rigamarole: “Finale d’Amore.”

Threaded throughout the musical are the multiple characters played by the energetic, big-voiced Troy Valjean Rucker:  an usher at the theater, a bellhop, a so-so operatic tenor, a kindly priest, a gay florist and, finally, a neighborhood yenta, Roz. Another constant is the monolithic Lips, bodyguard to Sal Penza.  Viet Vo makes the most of the not-so-inscrutable Lips who is far deeper than he seems at first.

All the actors sing and move well.  Directed and choreographed by theater veteran Justin Ross Cohen (A Chorus Line, Pippin), Romeo & Bernadette is fast-paced and funny, full of surprisingly witty and moving moments. 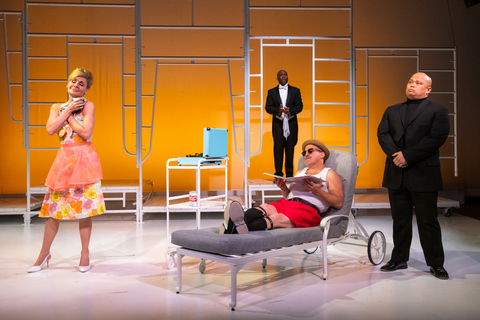 Walt Spangler’s set constructed of white piping provides multiple playing areas that are enhanced by legendary Ken Billington’s brilliant lighting.  Costume designers Fabio Toblini and Joseph Shrope clearly delighted in producing outfits from the various periods, catching every detail from the chic high-heeled shoes to the gold jewelry worn by most of the characters.