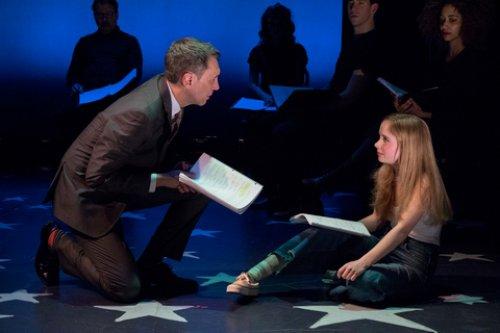 Robert Sella as Humbert Humbert and Caitlin Cohn as Lolita in a scene from the York Theatre Company’s New York premiere of “Lolita, My Love” (Photo credit: Ben Strothmann)

The 1971 Alan Jay Lerner/John Barry musical, Lolita, My Love, is probably the most famous pre-Broadway musical that did not make it to New York. Now as part of the Musicals in Mufti Winter 2019 Series celebrating the centennial of lyricist/librettist Alan Jay Lerner, The York Theatre Company is presenting the New York premiere in a version edited by Lerner scholar Erik Haagensen from the six extant scripts that Lerner wrote before and after the Boston closing. The York’s presentation is in the format of a staged concert reading with books in hand as are all of the Muftis.

Based on the controversial and provocative novel by Vladimir Nabokov, published in 1955, Lolita is about Humbert Humbert, a middle-aged professor who becomes obsessed with a pre-adolescent girl named Lolita (12 years old in the novel). Filmed by Stanley Kubrick in 1962 with James Mason and Sue Lyon, the story remained controversial, but proved less so by the time of the 1997 remake with Jeremy Irons and Dominique Swain. There was also a 1981 Edward Albee stage adaptation with Donald Sutherland and Blanche Baker which folded after 12 performances, as well as one opera, one abandoned opera, and two ballets. Nabokov’s novel would not seem ripe for treatment as a musical play due to the sensitivity of the subject matter and the recent sexual abuse scandals which seem to hit the headlines almost every other day. 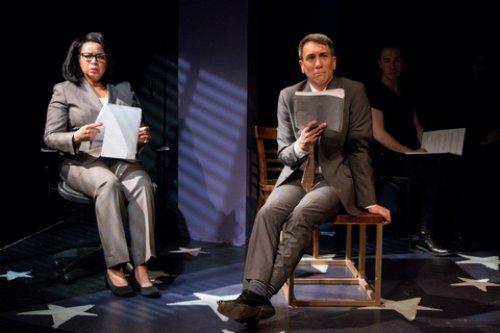 However, Nabokov famously stated that if Lolita were to be adapted as a musical, Alan Jay Lerner was the one to do it. The theme is right out of the Lerner canon. Julie Andrews was 19 when she created Eliza Doolittle in Lerner and Loewe’s My Fair Lady. Leslie Caron played a 16-year-old girl in the Lerner and Loewe film musical of Collette’s Gigi. And in Lolita, My Love, with music by John Barry, the Academy Award winning composer best known for his 11 James Bond scores, the title character is 14 years old in the Haagensen version.

The play also touches on Lerner’s favorite theme of recapturing lost time: The Day Before Spring, Brigadoon, On A Clear Day You Can See Forever, Carmelina and Dance A Little Closer all deal with characters who want to turn the clocks back to an earlier era and find something that they have lost. For Nabokov’s Humbert Humbert, life stopped when he lost his childhood love Annabel at age 13 and he has been trying to recapture that part of his life ever since with his infatuation with pre-pubescent girls. And finally, many of Lerner’s heroines attempt to reinvent themselves as someone else. The protagonists of My Fair Lady, Gigi, On A Clear Day, Coco, Carmelina and Dance A Little Closer spend a great deal – if not all – of their time – trying to become someone other than who they are. In Lolita, My Love, it is the male protagonist, Humbert Humbert, who goes through this transition while attempting to mold his step-daughter Lolita into someone she is not.

Haagensen’s new version (based primarily on the two scripts Lerner wrote after the show’s closing) cleverly side-steps some of the issues with the unpleasant theme of sexual abuse of minors. Here, Humbert is telling his life story to Dr. June Ray, a female prison psychiatrist, after he finds himself in jail for murder, one which is revealed very early on in the musical. Humbert, a famously unreliable character, gives us his version of the story as well as showing us Lolita exclusively through his eyes. Another level of the story is that we also get the reactions from the psychiatrist who keeps him on track. 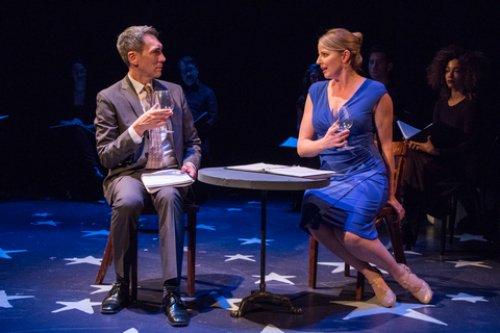 The musical is extremely faithful to the events of the novel. Having had a nervous breakdown while an English teacher in an all girls’ school in Switzerland, Humbert has moved to Ramsdale, Vermont, as a lecturer in poetry. He takes a room in the home of the vulgar, social climbing and bourgeois widow Charlotte Haze when he discovers that she has a 14-year-old daughter Lolita who looks exactly like his lost love Annabel. While Charlotte attempts to romance Humbert, he only has eyes for Lolita whom he believes is flirting with him. However, when Charlotte sends Lolita off to summer camp, Humbert decides to marry her in order not to lose Lolita. After their marriage, Charlotte reads Humbert’s diary and decides that Lolita would be better off in boarding school. Just as Charlotte is about to reveal Humbert’s secrets to her friends, she is killed in a freak car accident.

Humbert takes Lolita out of camp and they start on a cross-country journey. Along the way, Lolita meets playwright Clare Quilty who turns out to be Humbert’s nemesis. After a stop at Beardsley College in Ohio, they are on the road again where Lolita becomes increasingly restless. Eventually, she gets away from him and he spends two years searching for her. This eventually leads to the story’s tragic and shocking ending. The question is never answered in either the musical or the book whether Lolita seduces Humbert or he destroys her innocence. In any case, the subject of inappropriate sexual relations with minors is depicted in both versions. 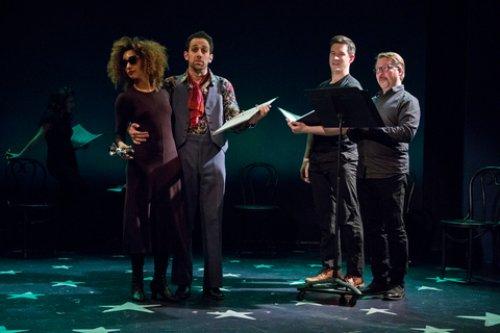 Becca Fox as Vivian Darkbloom, George Abud as Clare Quilty, Max Meyers as the Bellboy, and Mark Montague as Mr. Bliss in a scene from the York Theatre Company’s New York premiere of “Lolita, My Love” (Photo credit: Ben Strothmann)

While director Emily Maltby has created an impressively minimalistic and stylized production using an ensemble of eight singer/actors to play all the minor characters in semi-choreographed fashion, the main problem for the stage still remains: how to cast this story with its unpleasant leads. The four, Humbert, Lolita, Charlotte and Quilty are extremely unlikable people. Maltby’s production only succeeds with one. As Charlotte Haze, Lolita’s crass and uncultured mother always striving to speak languages she doesn’t know and talk of authors she has not read, Jessica Tyler Wright is delightful in this satiric portrait. Her number “Sur le Quais (de Ramsdale, Vermont)” in which she tries to bring France to her home brings down the house.

Unfortunately, the songs for both Robert Sella as Humbert and Caitlin Cohn as Lolita sit awkwardly in their voice range. To his credit, Sella maintains his professorial accent and demeanor throughout. Nevertheless, lacking charisma as the protagonist, Sella seems always to be apologizing for his actions, rather than charming us into accepting them. Cohn’s Lolita, albeit a school girl going through darkest adolescence, is nothing more than a spoiled brat, always arguing with her mother or Humbert, but knowing exactly how to get what she wants. However, she is very convincing as a 14 year old on the verge of womanhood. George Abud’s Clare Quilty is something else again. His portrait of a treacherous, deceitful friend and lover is a caricature out of another story altogether. It might be fine in another context but here it tears at the delicate fabric of the story. 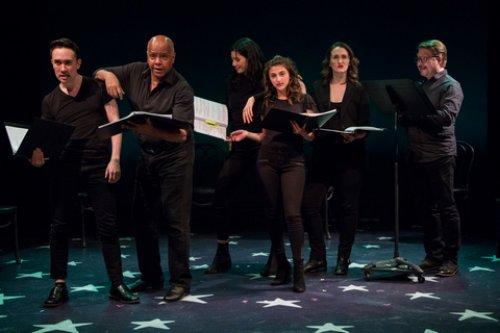 While the program for the original 1971 production listed 20 musical numbers, the 2019 show has 27 with at least eight reprises which is too long, as is the show at two hours and 45 minutes. The score is made up of attractive ballads, clever patter songs, and musicalized conversations including some of Lerner’ best work and some of his weakest. The most famous song in the score, “Going, Going, Gone” gets short shrift here, although Shirley Bassey’s 1973 recording was a huge success (she often sang John Barry songs.) “In the Broken Promise Land of Fifteen” also sung by Humbert fails to register as does the loveliest song, “Farewell, Little Dream.” Lolita’s biggest number, “All You Can Do Is Tell Me You Love Me,” while delivered in an impassioned style, is rather strident as sung by Cohn. The most effective choral number is the hilariously staged and sung “At the Bed-D-By Motel” and its two later versions which are used to delineate Humbert and Lolita’s trip across the country, the famously satiric part of the novel.

The York Theatre Company is to be applauded for taking the risk of staging this famously controversial musical in its New York premiere. It is also fulfilling its mission to bring to the stage musicals of quality that might not be done elsewhere. As Alan Jay Lerner is one of the legendary giants of the musical theater, it is a pleasure to be able to see this lost musical in a workable version. However, despite the excellent staging by director Emily Maltby, Lolita, My Love, the casting still seems problematic and the musical is ultimately disappointing. And while music director Deniz Cordell has performed yeoman’s work reconstructing the score and playing it entirely solo at the piano, John Barry’s music is not aided by being heard in this cut-down orchestration.