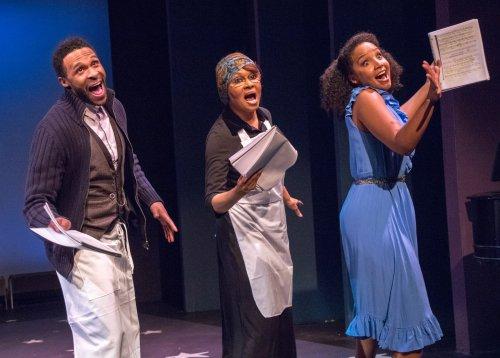 Hallelujah, Baby!, Arthur Laurents’ problematic 1968 Tony Award winning musical about the Civil Rights movement, with its score by Jule Styne and Comden & Green, was revised in 2004 for the George Street Playhouse with additional lyrics by Amanda Green bringing the story up to that year. As the opening of a series of three Winter 2018 Musicals in Mufti celebrating Legendary Broadway composer Jule Styne, The York Theater Company is presenting the New York premiere of this version also seen at the Arena Stage in 2005.

While the new cut-down version (performed concert style with book in hand) with nine actors instead of the original 36, now covers 100 years, rather than the sixty in the original show, it still remains a shorthand version of the history of the movement as well as the trials and tribulations of African American performers in show business. Originally written with Lena Horne in mind, when she turned it down the starring role of Georgina Franklin went to newcomer Leslie Uggams and was subsequently revised to accommodate her softer, girl-next-door persona. Although her perky, animated performance won her the Tony Award for Best Actress in a Musical, Laurents was never happy with the compromises made to the show. The more tightly written show which now focuses on four main characters still doesn’t solve all the problems inherent in the material, as directed by Gerry McIntyre it does make for fast-paced musical entertainment with a great many unfamiliar songs. 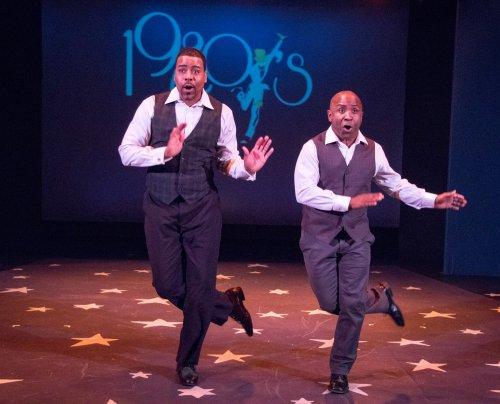 Bernard Dotson and Randy Donaldson as Tip and Tap in a scene from “Hallelujah, Baby!” (Photo credit: Ben Strothmann)

Beginning as a flashback, the show is narrated by heroine Georgina Franklin who tells us that although 100 years will go by she and the other characters remain the same ages throughout (a technique borrowed from the innovative 1947 Alan Jay Lerner and Kurt Weill musical, Love Life.) When we first meet her, she is a discontented maid along with her mother on a South Carolina estate. Her boyfriend Clem, a Pullman porter, discovers he will not have enough money for the down payment on the home that he and Georgina have picked out. Although Momma’s advice is to keep her place, Georgina accepts a job from local theater producer Harvey (a white liberal) to play a maid in a Civil War play. As blacks and whites are not allowed to appear on the same stage together in the 1910 South, Georgina is fired and finds herself back in the kitchen.

Depicting each decade up through the 1960’s, Georgina meets with racism, the Great Depression, the fate of the WPA, World War II, segregation and finally bigotry in housing. Ultimately becoming a star without the help of her disapproving mother, her show biz rise parallels that of Clem in the Civil Rights movement. While the loyal and love-sick Harvey is there all along the way, ultimately he must decide if he wants to wait for society to accept them as a couple as well as for Georgina to make up her mind between him and Clem. The final scene takes place at the White House in 2004 where Georgina – and we –discovers that there is a still a long way to go for equality and civil rights.

This revised version eliminates eight musical numbers but restores “When the Weather’s Better,” an optimistic song used as a connective link throughout the show and which explains the original show logo of Georgina with an umbrella. One of the additional problems with the show is that the Styne/Comden & Green songs, while attractive, do not sound very ethnic but rather Broadway, so the show seems to lack authenticity. The engaging Stephanie Umoh (who made a fine impression in the York’s revival of Jerry’s Girls this past summer), is refreshing as Georgina and gives impassioned and dynamic renditions of “My Own Morning,” “Being Good Isn’t Good Enough” and “Now’s The Time.” 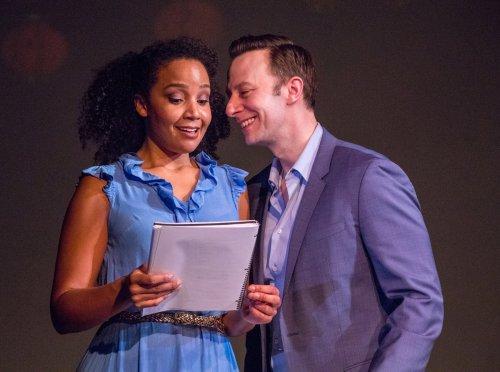 Like Georgina’s single note of determination, Jarran Muse’s Clem is simply angry all the time, but Muse gives a fervent performance as a man not willing to accept his assigned lot. Muse also contributes his fine baritone to his few duets with Umoh including the torch song, “Talking to Yourself.” In the underwritten role of Harvey (who is given no back story), Tally Sessions is charming though his role is the least defined. He and Muse have an excellent duet in the melancholy number, “Not Mine.”

In the role that won Lillian Hayman the Tony Award for Best Featured Actress in a Musical, Vivian Reed is delightful as Momma and almost steals the show with her rendition of “I Don’t Know Where She Got It.” Randy Donaldson (who appeared in the two previous revivals) and Bernard Dotson are adept at their two tap dance numbers to the title song and “Feet Do Your Stuff,” as well as giving support in some minor roles. Jennifer Cody, Michael Thomas Holmes and Latoya Edwards play all the rest of the walk-on characters.

Gerry McIntyre obtains strong performances from his cast but is unable to solve all of the shows problems. Performed with no scenery, there are slide projections by Justin Ward which state the year for each sequence. Graham Kindred is responsible for the rather low-key lighting design. Music director David Hancock Turner at the piano and Richie Goods on bass give a good reading of the melodic Styne score. While it is interesting to see Arthur Laurents’ second thoughts on Hallelujah, Baby!, his next to last original Broadway musical, the revised version is still something of a disappointment. It remains an ambitious failure with memorable moments.