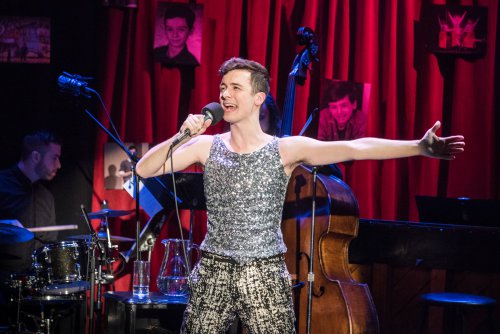 Diva: Live From Hell, an energetic, campy variation on the “All About Eve” theme, is performed with manic glee by Sean Patrick Monahan who also wrote the book and created all the colorful characters.  His partner in crime is Alexander Sage Oyen who provided the music and lyrics.  Sex (requited and unrequited), ugly violence and dark humor are all thrown into the story which is told by Desmond Channing (Monahan, who also plays virtually a high school’s worth of characters).

Desmond, a young, fey man with a hyper-developed musical theater gene, is the cock of the walk of the Ronald Reagan High School’s drama club.  It is the one thing that keeps him going.  Although clearly gay, he confesses to loving Sarah Siddonbacher who eventually falls under the spell of new boy in town, Evan Harris.

Evan is handsome, talented and, worse yet, from sophisticated New York City where his experience puts poor Desmond to shame.  From Evan’s first appearance at Reagan High, he takes the focus from Desmond, easily getting the lead, Frederic, in the school’s fall musical production of The Pirates of Penzance, with Sarah as his love interest, Mabel. Things only get worse from then on with Desmond feigning pleasure in Evan’s success, but secretly lusting after him even after Evan horns in on Sarah. 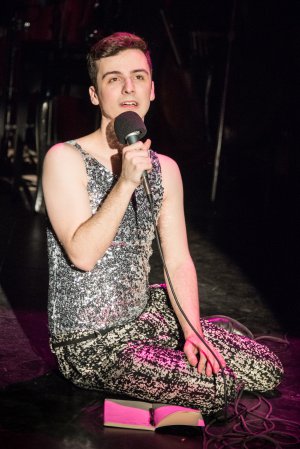 Desmond’s right hand “man” is little Allie Hewitt, the one character with some sense and the person who tries to disabuse Desmond of his heterosexuality.  She is Desmond’s little girl Greek chorus with the lisp, always commenting on his wayward thoughts—sadly, to no avail.  Desmond lets his self-delusions and sexual frustration take over, leading to violence and his visit to hell where he is forced to perform this play over and over again.  Even Desmond’s patron saint, Kevin Kline, cannot help poor Desmond, although he comes to Desmond in a vision.

Monahan, a youthful looking cutie-pie, manages to act each character with head-twisting speed, making each clear and distinct, even singing in different voices.  As for Monahan’s musical talents, he has a big voice that belies his slender figure and puts his all into every one of them.

He is also a talented writer.  Diva: Live From Hell, though lightweight, displays a keen, witty sense of the closed-minded community and, particularly, the aches and pains of the high school years.  Monahan knows every one of these characters.  I only wish he had fattened up the script with some lines about how he actually got to hell.  We know he deserves to be there, but he might have mined the journey for its comic effect. 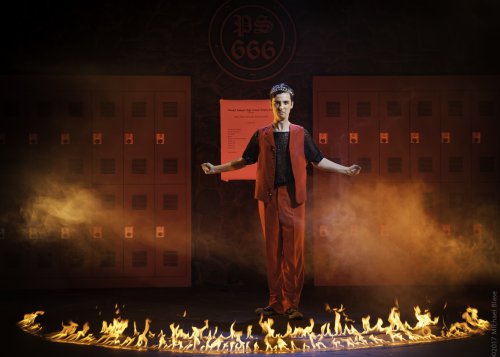 The music is mostly in the rock and roll vein, played by a vigorous, on stage trio, Sammy Wags (drums), Rob Taylor (bass) and Luke McGinnis (music director and piano) whose music was mixed with subtlety by Evan Tyor.  There were upbeat, angry songs and painful rock ballads, all handled with skill by Monahan.

Las Vegas and works well to give some glitz to the show.

Director, Daniel Goldstein, keeps the show moving at an impressive pace while still making sure Monahan didn’t burst into flames.

Diva: Live From Hell has a lot to recommend it, particularly in Monahan’s performance.  It is clever, fun, camp and deliciously mean-spirited.

Running time:  75 minutes with no intermission