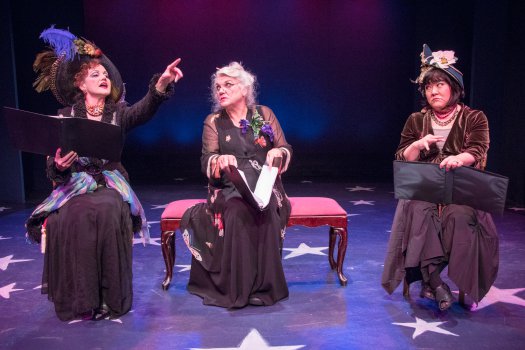 Tony and Emmy Award winner Tyne Daly makes a triumphant return to golden age musicals as the Countess Aurelia, aka The Madwoman of Chaillot, in The York Theatre Company’s charming semi-staged concert version of Jerry Herman’s much maligned Dear World. The excellent Musicals in Mufti staging by Michael Montel with a top flight cast also includes such Broadway veterans as Alison Fraser, Ann Harada, Gordon Stanley, Stephen Mo Hanan, Lenny Wolpe, Peter Land and J. Bernard Calloway. This is the show’s first New York revival since the 1969 original production which won Angela Lansbury the second of her five Tony Awards. Its theme of the abuse of power and money makes this perennially relevant.

Dear World is based on Jean Giraudoux’s French fable for adults, The Madwoman of Chaillot in the English adaptation by Maurice Valency. The 1969 consensus on the musical version was that the Jerome Lawrence and Robert E. Lee book as seen at Broadway’s Mark Hellinger Theatre was very hard to follow in its gargantuan production. The 2000 Goodspeed revival had a revised book by David Thompson with the addition of three new songs. A 2002 Sundance production was further revised by Thompson. The revisions return the show to the chamber musical that Herman, Lawrence and Lee original imagined. Obviously perfect for the leading role, Daly has previously appeared as the Madwoman of Chaillot in a concert version performed in Los Angeles on Sept. 30, 2016.

Dear World takes place in the Paris of 1945. Drinking a glass of water at the Café Francis, The Prospector discovers proof of oil in the water under the city. With the three Presidents of The International Substrate of Paris, Inc., he plots to blow up the café to reach the oil. When their plot fails to happen as their young assistant Julian attempts to throw himself in the Seine and is brought to the cafe, he falls in love with the lovely waitress Nina. The eccentric Countess Aurelia, aka the Madwoman of Chaillot, who lives under the café and may or may not be the proprietress, hears Julian’s story and decides it is up to her to save Paris from the forces of evil. 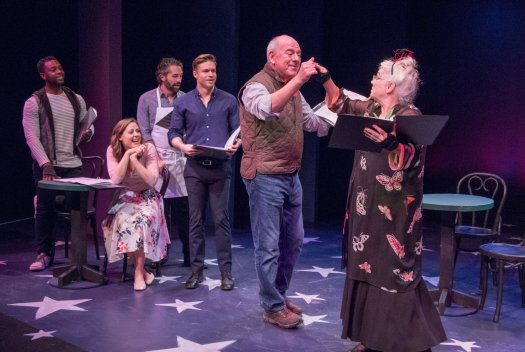 With her friends the equally mad Madame Constance, the Madwoman of the Market, and Madame Gabrielle, the Madwoman of Montmartre, she puts the businessmen on trial in absentia with the testimony of The Sewerman who is an authority on the Paris underground. It is Countess Aurelia who decides the punishment for these men who care nothing for human lives or beauty. Along the way, she brings Julian and Nina (who are obviously in love) together.

Having played such indomitable women as Mama Rose and Maria Callas, Daly slips into the role of the Madwoman of Chaillot which fits her like a glove with her crisp, authoritative delivery. As a woman who refuses to see reality for what it is, she gives a powerful rendition of “I Don’t Want to Know,” the show’s only hit song. She does a lovely job with the new number, “A Sensible Woman,” as well as the haunting ballad, “And I Was Beautiful.”

Daly is ably supported by her two deliciously dotty friends: Fraser as the man-hungry Madwoman of the Market who hears voices in household objects and is deaf every day except Wednesday, and Harada as the virginal Madwoman of Montmartre who walks an invisible dog which she sometimes forgets to bring. They make a marvelous vaudeville act as they try to outdo each other with their cynical taunts and mockery.  The threesome make a small mini-musical out of the mad Tea Party sequence in the second act which includes solos, duets and trios of Memory, Pearls, Dickie, Voices and Trio which famously resembles Sondheim. 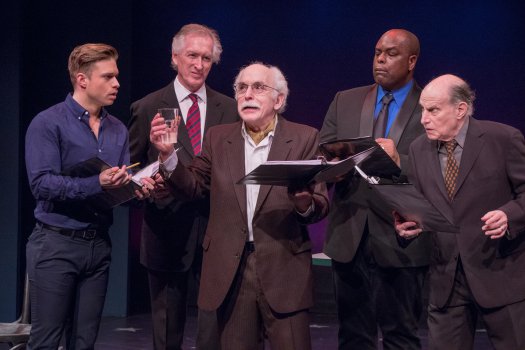 Hunter Ryan Herdlicka makes a handsome leading man as the troubled Julian caught between necessity and integrity, while Erika Henningsen as Nina reveals a beautiful soprano in her one solo, “I Never Said I Love You.” Lenny Wolpe is charmingly suave as the Sewerman, the Countess’s go-to man for advice. As the greedy and amoral Presidents, Peter Land, Stephen Mo Hanan and J. Bernard Calloway are juicily villainous with Land having the slight edge on the sinister and sarcastic. Also responsible for the movement staging, Kristopher Thompson-Bolden almost dances his silent role as The Mute. Gordon Stanley’s Prospector is suitably peremptory and as rapacious as the Presidents.

The melodic music is played by music director Christopher McGovern at the piano accompanied by Louis Tucci on bass. Tucci occasionally plays an accordion which gives the musical a decidedly Gallic sound. The score of the revised version also includes Herman’s witty lyrics for “Just a Little Bit More” sung by the greedy villains and “Have a Little Pity on the Rich,” The Sewerman’s apologia for his life style, backed up by a wry Constance and Gabrielle. In the capable hands of the musicians, the title song becomes the anthem it is meant to be.

Deftly directed by Michael Montel with a light touch, the Musicals in Mufti version of Dear World demonstrates that there is a life after Broadway and that this is a show whose message about good, evil and avarice and that one person can change the world will never go out of style. Dear World in this form is a charming fable that should be better known. A good deal of that is due to the glorious Tyne Daly who has found another role of an invincible woman that she makes all her own. Like Herman’s Dolly Levi and Mame Dennis, the Countess Aurelia is another bigger-than-life character who is guided by her own rules and makes this a better place to live in.