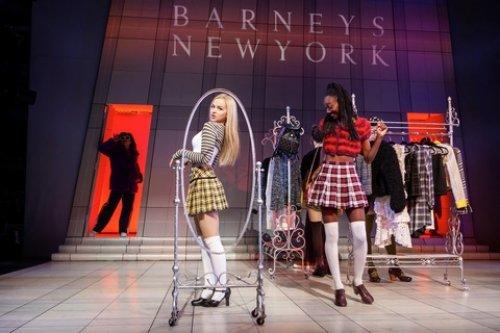 Dove Cameron and Zurin Villanueva in a scene from “Clueless, The Musical” from The New Group (Photo credit: Monique Carboni)

The movie was famously an update on Jane Austen’s Emma resetting the story of the young lady who attempts to meddle in the lives of those around her among the wealthy in 1995 Beverly Hills, but that no longer seems to be the impetus for the musical. Cher Horowitz who is almost sixteen (so that she can’t yet drive) is the queen bee at Bronson Alcott High School. She is into clothes, pop culture and boys and little else. Her father Mel bringing her up alone since her mother died when she was a baby attempts to rein in her excesses but she is almost always able to get around him. As a high-powered litigator handling big divorce cases, he has taught Cher that everything is negotiable.

Her best friend Dionne, similarly styled, is in a long term volatile relationship with Murray, usually fighting with him over his attempt at a phony street cred. As a good deed, Cher and Di attempt to match up awkward political science teacher Miss Giest, a hopeless mess, with equally clueless intellectual debate teacher Mr. Hall.  The only one to tease Cher about her superficiality is her step-brother Josh, a pre-law student, whose mother was briefly married to Cher’s father. 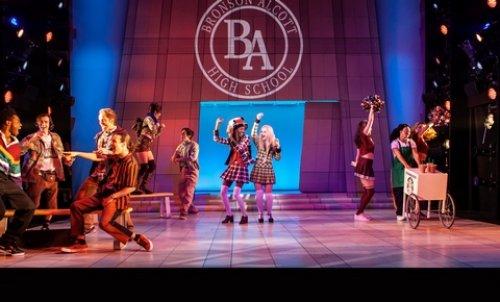 Zurin Villanueva, Dove Cameron and cast in a scene from “Clueless, The Musical” from The New Group (Photo credit: Monique Carboni)

When clueless and socially inept Tai enters the school, Cher decides to take her on as a personal project with a much needed makeover, teaching her how to dress, look, talk and who to hang out with. When Tai is attracted to stoner Travis, Cher steers her in the direction of the more eligible Elton who is completely oblivious to her. Ironically, her work is so successful that her creation takes on a life of her own and Tai becomes very popular. When Elton makes an unwanted pass and Cher falls for suave and handsome new kid Christian who turns out to be gay, she realizes that she may be the one who is clueless. Ironically, her much maligned step-brother Josh is always there to pick her up when she falls. 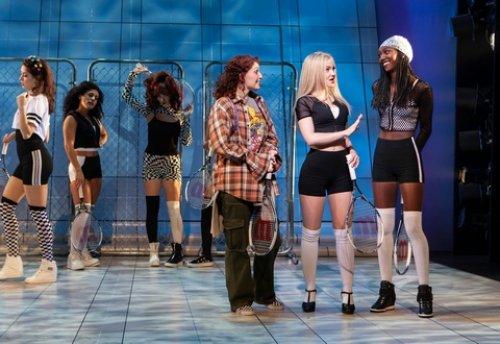 Part of the fun of the show is recognizing the music of the 1990’s put to new uses. Heckerling has used songs from such bands and singers as Ace of Base, Destiny’s Child, Michael Bolton, M.C. Hammer, Aqua, Joan Osborne and N SYNC as well as three songs used in the film: “Supermodel,” “Kids in America,” and “Rollin’ with My Homies.” Unfortunately, while her new lyrics are clever, the songs only tell us what we know already both from the dialogue and the storyline.

Hanggi appears to have cast the show with the look of the film originals in mind. As Cher, Cameron is a sophisticated teen but her overweening sense of entitlement is not charming as Alicia Silverstone was in the film, but off-putting now. Dave Thomas Brown’s Josh is rather bland without the wry humor that Paul Rudd brought to the same role.  Zurin Villanueva and Gilbert L. Bailey II appear to be channeling the actors who played Di and Murray in the film. As mean girl Amber, Tessa Grady isn’t given a great deal to do.

Only Ephie Aardema’s Tai and Will Connolly’s Travis are allowed to depart from the film characters and make their roles all their own. Taking a page from the stage musical of Mean Girls, a clever device is to have all the authority figures played by the same two actors. Chris Hoch is amusing in his various guises as Cher’s father Mel, her debate teacher Mr. Hall and the ironic DMV Driving Tester. Megan Sikora makes awkward political science teacher Miss Geist and the more with-it phys-ed teacher Ms. Stoeger very different.

The design team has given the show a high tech look. Beowulf Boritt’s all-white set is the screen for Darrel Maloney’s projection design but although it is colorfully lit by Jason Lyons, it is devoid of atmosphere. Amy Clark’s costume designs often echo the film outfits particularly Cher and Di’s iconic matching plaid suits which are often mirrored in the scenic design. Kelly Devine’s choreography is pleasantly busy but unmemorable.

Clueless, The Musical is an interesting attempt to put an iconic teen romantic comedy on the musical stage without changing much from the film but adding songs from the period with new lyrics. The idea is a clever one. However, times have changed and what was charming and acceptable in 1995 no longer seems so. Cher Horowitz and her friends seem much more unpleasant and unsympathetic than they did two decades ago. Maybe now we need to see how they all grew up.

Clueless, The Musical (extended through January 12, 2019)