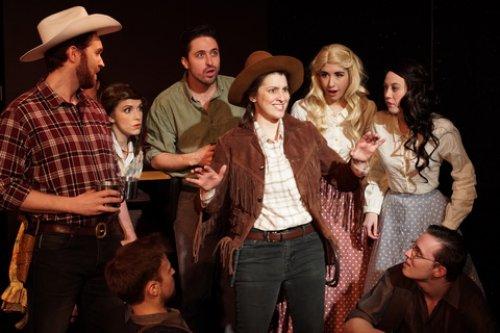 Warner Brothers’ Calamity Jane is best known for its Academy Award winning song, “Secret Love” and keeping Doris Day in pants and buckskins for most of the movie as the historical sharp shooter and one of the peace keepers of Deadwood City, in the Dakota Territory. Musicals Tonight!’s 100th and final show is the New York stage premiere of  this western musical based on the 1953 film that co-starred Day and Howard Keel. Though the stage version has had multiple regional productions since 1961 and many British stagings since 1974, it had never had a full NY production until now.

It would be a pleasure to say that Musicals Tonight! is going out on a high but that would not be accurate. While the book by Ronald Hanmer and Phil Park based on the play by Charles K. Freeman is very old-fashioned and the original score by Sammy Fain and Paul Francis Webster is quite derivative, the real problem is with the production staged by Devin Vogel making his Off Broadway directing debut. While the Wild West material suggests color and ambiance, this Calamity Jane is devoid of those things.

Performed on an all dark brown stage, the production lacks atmosphere and an aura of the Wild West days. It depicts the frontier which certainly would not have been colorless in 1876. The large cast of 16 is fine but there are no standout performances. It also does not help that Kristin Wetherington in the title role of the frontierswoman who is careless with the truth lacks the charm and seductive quality that Day brought to the movie.

The story line remains very close to the movie screenplay by James O’Hanlon while rearranging the running order of the songs as well as some of the scenes. When Henry Miller, proprietor of The Golden Garter’s theater, mistakenly hires actor Francis Fryer from New York to perform for his regular clientele, under the misimpression that Francis is a woman, Calamity Jane, who has had her own small misfortunes, offers to save him. She will go to Chicago and hire Adelaide Adams, the darling of the settlement due to her shapely figure in the photo in dishabille included in the cigarette boxes prized by the miners. Unfortunately for Calamity, she finds Adelaide’s maid, Katie Brown, singing one of her songs in her dressing room after Adelaide has left for Europe. When Katie pretending to be Adelaide Adams arrives in Deadwood City, she is treated like a star. As The Golden Garter’s rooms have no locks, Calamity invites “Adelaide” to room with her in her cabin.

By now both rugged Wild Bill Hickock, the local peacekeeper in town, and handsome Lt. Danny Gilmartin of nearby Fort Scully (who Calamity is sweet on) have fallen for the feminine “Adelaide,” and come visiting their cabin making Calamity extremely jealous. It is decided that “Adelaide”’s first performance will take place at the Colonel’s Ball at The Golden Garter, to which the two men escort both women, and see Calamity dressed up in feminine attire for the first time. Unfortunately, Katie fails miserably at first and can’t go on with her deception but Calamity orders the crowd to give her a chance. The love stories eventually work themselves out with a little help from Wild Bill who realizes that he and Calamity have a special bond. A new subplot concerns Francis Fryer and Susan, Miller’s niece, who has talent as a song and dance performer herself.

As played by musical director Nevada Lozano on keyboard with musicians Rob Hecht (violin, mandolin and guitar) and Jessie Nelson (percussion), the Fain/Webster score is animated and lively. However, too many of the songs sound like versions of more famous numbers in Annie Get Your Gun and Paint Your Wagon, among others. The score contains all of the songs from the original movie plus six others written for the film but not used that ended up in the Doris Day musicals, Lucky Me and Young at Heart, also by Fain and Webster. While such songs as “Everyone Complains About the Weather,” “Hive Full of Honey,” “Keep It Under Your Hat” and “Men” have clever lyrics, none of the songs forward the plot but instead seem to be window-dressing. The lovely ballads “I Speak to the Stars,” “Love You Dearly,” “It Looks Like Love,” “There’s A Rising Moon for Every Falling Star” and “Secret Love” fail to register the way they should.

The cast seems to be working harder than they ought. Although Wetherington as Calamity Jane has a fine singing voice when she finally lets loose in the second act, she is rather too intense for a light musical comedy. As a woman who dresses up in men’s clothing and tells whopping great exaggerations, her Calamity is almost an anti-heroine which doesn’t help the show any. Baritone Peter Gosik offers strong support but is as wooden as Howard Keel or Nelson Eddy in their Hollywood musicals without adding a sense of humor of his own. The soft shoe and tap dance numbers are left to Jordan Bell’s Francis Fryer and Alexis Kinney’s Susan but Vogel’s choreography does not allow them much room to impress.

Rosalie Burke is sweet in the role of Katie Brown but does not make the sensation as the musical headliner that the show intends. As her beau, Jimmy Nicholas is rather bland in the underwritten role of the love-smitten Lt. Danny Gilmartin.  Brandon Grimes is mainly hyper as the proprietor of The Golden Garter, while Emily Larger shows versatility in the double role of his bartender Jo and the real Adelaide Adams. In his few appearances as the stagecoach driver Rattlesnake, Christian Brown wryly adds some needed humor and sense of the Old West.

While Hope Salvan’s costumes generally look authentic for the period, they lack personality as they often place the actors in white or drab colors when something more vivid is called for. The unimaginative staging by Devin Vogel is also lacking in stage business to give the actors more to occupy them. Musicals Tonight!’s production of Calamity Jane’s New York premiere demonstrates once again that weak shows need lavish production values and large song and dance choruses to put them over. This is an interesting but only occasionally successful rendition of the musical that proved to be a big hit as a Hollywood movie. Regular patrons of Musicals Tonight!’s 20 years of revivals and occasional NY stage premieres will have other memories to hold dear.