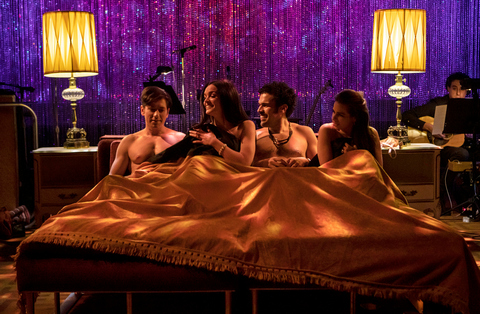 Composer Duncan Sheik has a penchant for creating musicals from unlikely source material: Spring Awakening from the 1891 play by Frank Wedekind about teenage sexuality, American Psycho from a novel about a serial killer in Wall Street, The Secret Life of Bees which put bee hives front and center, and Because of Winn-Dixie which required a big scruffy dog to stalk the stage. Now he has turned his attention to the 1969 film, Bob & Carol & Ted & Alice, from the Columbia Pictures motion picture by Paul Mazursky and Larry Tucker, a controversial and highly successful film in its day.  The film worked a good deal on the charm and charisma of its leads which included Natalie Wood, Robert Culp, Elliot Gould and Dyan Cannon, who won the New York Film Critics Award for Best Supporting Actress.

Stephen Sondheim has famously categorized this type of show as a “Why” musical: does musicalizing this property add anything to the original? Why does this need to be a new musical? Bob & Carol & Ted & Alice is a social satire about the then new sexual revolution (extramarital affairs, wife swapping, key parties, etc.) and middle-aged people who thought that they were missing out. It is specifically wedded to its 1969 period as social mores have changed tremendously since then. Obviously, it can’t be updated as it would seem very naïve now. 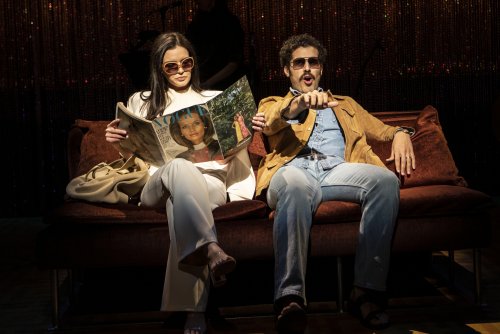 Jennifer Damiano and Joél Pérez in a scene from The New Group’s production of the musical “Bob & Carol & Ted & Alice” at the Pershing Square Signature Center (Photo credit: Monique Carboni)

Bookwriter Jonathan Marc Sherman has wisely kept the story in its period. However, his dialogue is almost word for word lifted from the screenplay which is rather old hat for those of us who have heard it in the movie. The score with music by Sheik and lyrics by Sheik and Amanda Green makes all the songs sound the same in Sheik’s orchestration played by a combo of four. The lyrics are both pedestrian and trite, telling us only what we already know. The songs which are not listed in the program include a great many reprises. Many of the tableaux and setups recreate exact visual moments from the film.

What is clever about the show is the staging by director Scott Elliott, artistic director of The New Group. The audience sits on three sides, almost night-club style, with the band on either side of the rear of the stage, with a glitter curtain behind them in Derek McLane’s witty design. A sofa, two ottomans, two table lamps and a few chairs make up the minimal set. The sofa becomes a car, a banquette at a restaurant, and later a double bed in three locations. Since the show uses only six actors, audience members in the first row are chosen to fill out scenes which need more people or in one case a stranger met on a plane. Singer/songwriter Suzanne Vega on mike sings, narrates and plays all of the other characters from her vantage point as the “Band Leader.” Unfortunately, Kelly Devine’s musical staging is not as clever, sending the actors to mikes placed at strategic places on stage. 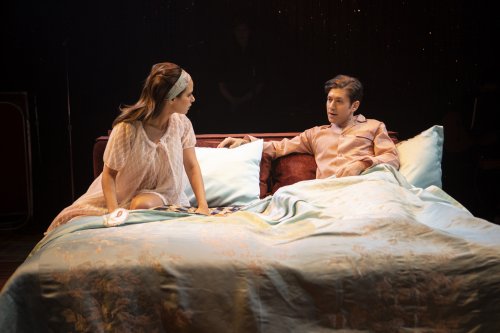 Ana Nogueira and Michael Zegen in a scene from The New Group’s production of the musical “Bob & Carol & Ted & Alice” at the Pershing Square Signature Center (Photo credit: Monique Carboni)

For those of you who have not seen the movie or  don’t recall the plot, Bob, a Los Angeles documentary film maker, and his homemaker wife Carol attend an Esalen-style retreat and become open to emotional honesty and sexual liberation. When they tell their less hip best friends, Ted, a lawyer, and Alice, a homemaker who is also Carol’s tennis partner at the country club, the friends are not ready for this kind of openness. When Bob comes home from a business trip to San Francisco, he reveals to Carol that he had a one-night affair while he was away. Surprisingly, Carol is not shocked but accepts that Bob followed through on his feelings.

When Carol reveals this affair to Ted and Alice after a dinner party where they all get high, Alice become physically sick when she gets home although Ted is still horny. She enters therapy to find out if something is wrong with her or her friends. Bob returns home early from a second business trip only to have Carol reveal she has slept with someone who is still in the house. Bob is at first outraged, but decides to take it in stride. When the two couples travel to Las Vegas for a weekend of fun, their relationship takes a surprising turn. 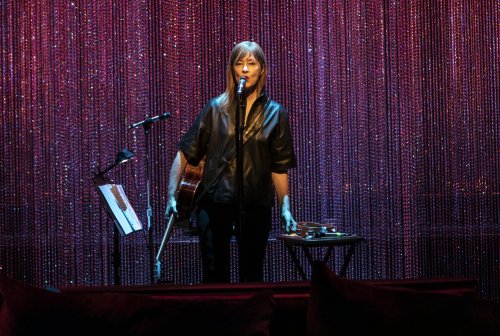 The four lead actors appear to be channeling the stars of the film. Jennifer Damiano as Carol and Ana Nogueira as Alice are made up and dressed to resemble Wood and Cannon, while Joél Pérez’s Bob looks a great deal like Gould’s Ted, though Michael Zegen’s Ted resembles neither of the film actors. While they are not as engaging as the film cast, they are personable in their own way. Pérez has a good deal of swagger as the sophisticated Bob while Zegen is amusing as the uptight friend. In the Natalie Wood role of Carol, Damiano is just as plastic as the film actress, while Nogueira as Alice still has all the best lines. Vega on mike is fine with the vocals; however, she has been directed to be totally unemotional as all the minor characters, which becomes rather wearing. Jamie Mohamdein who also sits with the band is listed as “Ensemble” but simply helps out on some of the vocals.

Jeff Mahshie’s costumes are redolent of the 1969 period with its time specific mini-skirts, double-breasted suits and Nehru jackets, but tend to play down the colors. The lighting by Jeff Croiter is subtle and varied, while Jessica Paz’s sound design allows every word to be clearly heard. Jason Hart, who is responsible for the music supervision, vocal arrangements and additional orchestrations as well as on keyboard, leads the accomplished combo made up of Simon Kafka on guitars, sitar and bass, Noelle Rueschman on reeds and the aforementioned Mohamdein on bass and drums. 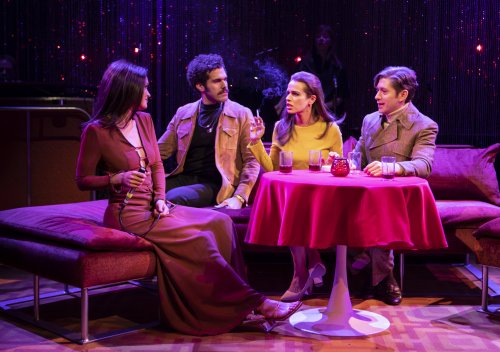 While the new musical Bob & Carol & Ted & Alice is an accomplished piece of musical theater, it adds little to the form or the film plot to make it necessary. Without some great songs and any new plot developments, it neither supersedes the film version nor makes you forget. Don’t blame the hard working cast who behave as though it is still 1969 and the height of the fraught sexual revolution, and each gets a good deal of stage time in this basically four character musical.