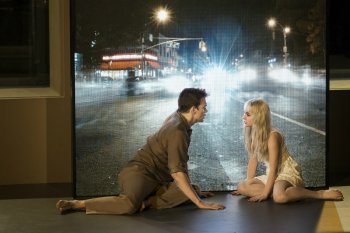 Legendary rocker David Bowie was scheduled to write the score for the cult film of The Man Who Fell to Earth in which he played alien Thomas Jerome Newton from the planet Anthea. Unfortunately, the negotiations fell through and it never happened.

Now he and Irish playwright Enda Walsh (author of Once, the musical which also appeared at New York Theatre Workshop) have written a musical sequel called Lazarus. Although the program claims that it is inspired by the 1963 novel by William Tevis, it actually continues the story as told in the Nicholas Roeg film. While Lazarus has 17 songs (four of which are new), this is not really a musical but an engrossing sound and light show with a psychedelic rock concert, not all of it making realistic sense.

Although this is the eighth show minimalist director Ivo van Hove has directed for New York Theatre Workshop, one would be hard put to recognize it as his. The production uses Tal Yarden’s almost continual streaming video, slide projections, a huge screen representing a television monitor, and an on-stage band made of seven musicians. The pink beige set is often turned into other locales with video which covers all three walls of the set. The band sits behind the set but is often revealed when Venetian blinds on the back wall of Newton’s apartment occasionally open for actors to be seen behind the windows or for the video to transform the stage like cinematic cuts into scenes from various locales. Like Roeg’s movie version of The Man Who Fell to Earth, Lazarus makes use of surrealistic imagery that gives the evening a psychedelic sensibility.

Although it is never explained in Lazarus, the background to the story from the novel and the film version is that humanoid alien Newton has come to Earth to save his planet which is dying from a lack of water. Amassing a fortune in the United States, he attempts to build a rocket ship to return to the planet Anthea when he is arrested by the U.S. government for illegally entering the country and subjected to many debilitating tests. The fate of his rocket ship is never entirely explained. 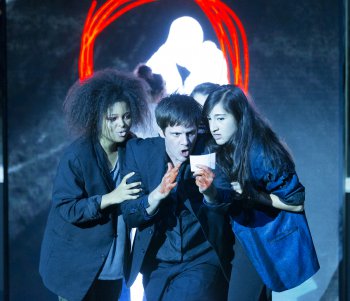 Lazarus takes place 30 years later. Newton is living alone in an Upper East Side Manhattan apartment living on gin, Lucky Charms cereal and Twinkies, doing nothing but watching hours of television, unable to sleep but unable to die. When the musical begins, Michael C. Hall (Dexter, Hedwig and the Angry Inch) as Newton is lying prone center stage, apparently passed out from alcohol. He is assisted by his recent employee Elly (Cristin Milioti) who is having problems with her husband Zack (Bobby Moreno). Finding that Newton is not attracted to her, Elly attempts to transform herself into Newton’s lost love Mary Lou, the girl with blue hair. Newton is visited by Michael (Charlie Pollock), a former business colleague who is shocked by the transformation in the multimillionaire.

In his desperation, Newton calls forth in his imagination a nameless blonde Girl (Sophia Anne Caruso) living in Limbo who has been sent to help him. She is backed up by three teenage girls who give her advice as though they are her guardian angels. Wandering throughout the story is Valentine (Michael Esper), dressed in black, who is seeking out Newton. Eventually he is revealed as an Angel of Death. Ben (Nicholas Christopher) and Maemi (Lynn Craig), a couple very much in love, also play a part in Valentine and Elly’s wanderings. As Newton becomes more and more distraught by the events happening around him, the Girl finally discovers her true purpose and what she has been sent to help him do.

While the songs do not forward the story as in a conventional musical, they represent Lazarus’ emotional center. Not exactly a juke box musical, the evening includes some of Bowie’s most iconic songs which fit neatly into the plot for these characters: “This Is Not America,” “The Man Who Sold the World,” “Changes,” “Absolute Beginners,” “Life on Mars?” and “Heroes.” Many of them have references to other planets, criticism of American culture, and selling out, all themes of both The Man Who Fell to Earth and Lazarus. Three of the new songs are for Newton (“Lazarus,”  “Killing a Little Time” and “When I Me You,”) while the fourth is sung by the Girl (“No Plan”) to him. The elegant orchestration and arrangements are by music director Henry Hay. In the hands of the singers and the band, this becomes an evening of classic rock. 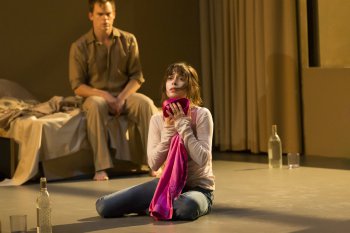 While the story may seem vague and mystical, the actors all have a handle on their characters. Not surprisingly, Hall as Newton seems bland and nebulous but then he is playing a character who is acted upon rather than acts for himself. (Bowie’s performance as Newton in the movie version worked on his unique persona and charisma.) Milioti (in her third show for NYTW including Walsh’s Once and von Hove’s The Little Foxes) is very strong as Elly who desperately wants to connect with Newton, even to her transformation into Mary Lou. Esper’s Valentine is affable and ingratiating though he can’t disguise his sinister intent. Caruso brings to the Girl all the innocence and confusion of youth, while she is given excellent support by Krystina Alabado, Krista Pioppi and Brynn Williams who also appear in other roles. Christopher and Craig are fine as the lovers but their storyline is less wedded to the rest of the plot.

Van Hove’s usual designer Jan Versweyveld is responsible for the fluid set and lighting design, while An D’Huys, another regular van Hove collaborator, has designed the casual contemporary costumes which set the story in the present day. While Yarden’s video design often feels like an assault on the senses (which may be its intent), it is quite remarkable in its way. Brian Ronan’s sound design is excellent whether for the hard rock numbers or the soft ballads.

Lazarus is an unconventional musical which requires a knowledge of the film version of its prequel, The Man Who Fell to Earth. At times it does seem as though there are too many stories being told. While its plot and video design are cryptic, mysterious and otherworldly, Lazarus offers the viewer the experience of an organized happening. Not for everyone, Lazarus (which is a very hot ticket) is for David Bowie fans as well as those looking for something unusual in music theater.