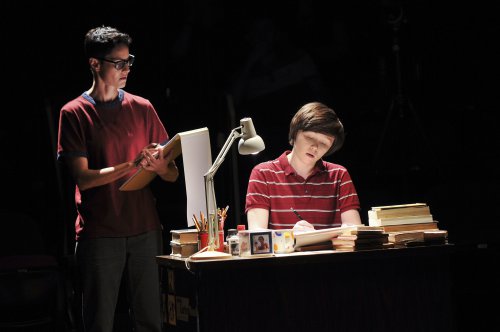 In 1969 theorist Carol Hanisch published her feminist essay “The Personal is Political,” and subsequently the title was employed by many LGBT activists as a campaign mantra. The axiom refers to opening up personal struggles to public discourse in pursuit of a political agenda. On Broadway, famous queer plays such as Larry Kramer’s 1985 The Normal Heart, Tony Kushner’s 1993 magnum opus Angels in America, and Moisés Kaufman’s documentary The Laramie Project employ individuals’ sexualities as a means to examine a broader social context. They take strong, unwavering stances on national visibility, legal protection, healthcare access, and myriad other gay rights issues. However, Fun Home—writing team Jeanine Tesori and Lisa Kron’s new musical addition to the canon—takes a different approach. Where its predecessors are didactic, sweeping, and necessarily political, Fun Home is emotional, delicate, and deeply personal.

Specifically, Fun Home is an adaptation of famous lesbian cartoonist Alison Bechdel’s autobiographical graphic novel of the same title. Through an artistic journey of catharsis, an adult Allison reconstructs her 1970’s rural Pennsylvania childhood and coming out story vis-à-vis her closeted homosexual father Bruce’s suicide. Using old diary entries, inherited family heirlooms, and her own memories, she analyzes her father’s behavior as a husband, parent, and human being from a more informed perspective. 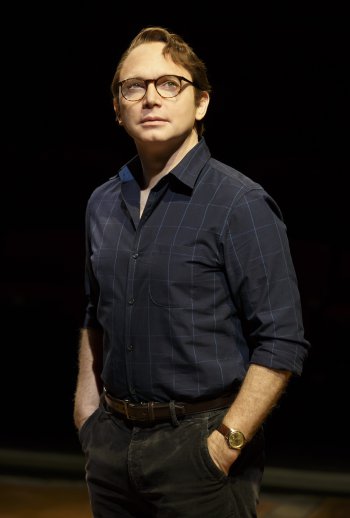 Along with the writers, director Sam Gold uses Bechdel’s memoir-style source material to the best of his ability. As adult Allison scribbles away in one of Circle in the Square Theatre’s many aisles, her younger incarnations come to life on set designer David Zinn’s pristine, museum-like 1970’s home, atmospherically lit by Ben Stanton. She reconstructs her fragmented past from moments that pop into her head: interacting with her brothers, coming out to her parents, losing her virginity, and numerous other milestones. Along with this non-linear, often abstract method of storytelling comes some problems with clarity and subtlety (i.e. a character singing her age simply for context, another conspicuously explaining the show’s title, etc.); however, the team’s unconventional methods largely pay off. Gold’s fluid staging evokes the nature of simultaneously enduring and fleeting memories. Likewise, bookwriter Kron does an admirable job making an inherently passive activity—that is, sitting and drawing—dramatically interesting.

Equally fluid is composer Tesori’s constant score that weaves through songs and scenes seamlessly. Neither memorably melodic nor harmonically grand, her angular, calculated music reflects the undercurrent of a home precariously teetering on the edge of tragedy, where one exposed secret could throw it off-balance. John Clancy’s understated orchestrations suggest tempered expectations, stifled emotions, and carefully chosen words. The high notes are not that high and the low notes are not that low until the home inevitably tips and loudly tumbles into chaos. 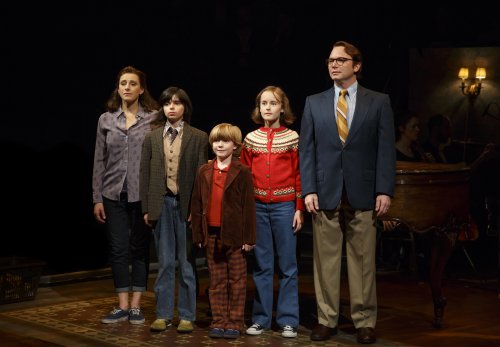 Inside this less-than-Fun Home of deception and repression is an exceedingly endearing and relatable cast of characters. Sydney Lucas, Emily Skeggs, and Beth Malone star as Small, Middle, and Adult Alisons, respectively; while their individual mannerisms and inflections may not depict a consistent character, their passionate performances work well enough together to amount to a moving “portrait of the cartoonist as a young woman” (or what have you). Stage and screen veteran Judy Kuhn likewise shines—or, more appropriately, fades—as the Alisons’ defeated mother Helen. As her former Disney princess voice glides across a broken ballad, Kuhn shows the anguish of a wife with nothing left to sing about. Perhaps most notably, Michael Cerveris’ heartbreaking portrait of Bruce is both authoritative and impotent, loveable and despicable.

If The Normal Heart, Angels in America, and The Laramie Project argue that “The Personal Is Political,” then Fun Home responds, “The Political is Personal.” The show’s goal is not to take a personal story and apply it to a larger context; rather, it wonders: When an important facet of your identity is necessarily a political statement, then how can you understand yourself personally? Fun Home is about rallying with the gay union in the hopes of finding a date, about realizing parents are real people with their own sets of problems, about asking for empathy before acceptance. Where Kramer, Kushner, and Kaufman make points, Bechdel, Kron, and Tesori pose questions. Where the other plays proudly wave slogans over their proverbial heads, this one vulnerably wears its heart on its sleeve.

Circle in the Square Theatre

235 West 50th Street, between Broadway and 8th Avenue, in Manhattan