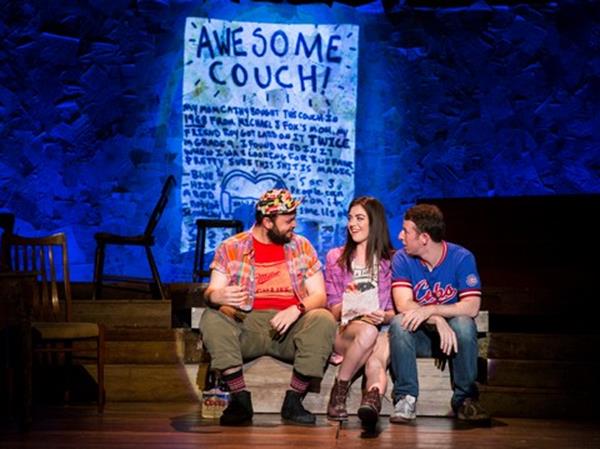 Fresh, clever, original and delightful new musical about the creation of the indie magazine that publishes actual letters and notes that people have lost is having its world premiere at Atlantic Theater Company. Entitled Found after the magazine and books of the same name, it is an engrossing fictionalized account of the life and career of creator Davy Rothbart, here played by Nick Blaemire.

Twenty-two of the 28 songs set to the sophisticated rhythms of composer Eli Bolin are based on the actual texts of these found missives and all of the many notes read are the original texts. The versatile and talented cast of ten (drawn from many different fields in the performing arts) offers various takes on the many notes and letters woven into the story of Davy and the magazine. Director Lee Overtree, co-founder of Story Pirates, the arts education organization, has realized inventive ways of staging this novel and unusual material.

The book to this new musical is by Hunter Bell, Tony nominated for [title of show] and Overtree who has also directed. Additional material has been created in collaboration with Story Pirates. Bolin has also created new lyrics for some of the supplementary songs that forward the story of Davy and the founding of the magazine. Not only is their work witty and fresh, it is also a new wrinkle on an old formula of the revue with a storyline.

Davy addresses the audience directly with the tale of his woes on a day in 2000 when he was fired, mugged and then found what he thought was a parking ticket on his car. However, it wasn’t – it was a note from Amber intended for her two-timing boyfriend Mario, not meant for Davy at all. As a result he get the idea for the magazine. With the help of roommates Mickey D, his long-time best friend, and Denise, formerly the manager of her friend’s band, the trio begin collecting letters, notes and lists lost or thrown away. They then ask other people to make submissions. After their first issue is published, they go on a road tour reading and performing in clubs to help sell the magazine. And then Davy meets and falls in love with Kate, an aspiring L.A. television producer, who suggests that he come out to the coast and pitch the idea of a television show based on the format to the networks. Hubris, selling out and betrayal are the dramatic events that follow.

The songs are used both to narrate Davy, Mickey D and Denise’s story as well as to present letters that have appeared in Found magazine. Others are intended as fantasies suggested by the content of the letters. One of the funniest sequences is the recreation of a performance of Johnny Tremain for a junior high school group that can’t behave itself and interrupt the show. The notes, both sung and spoken, tend to be about love and loss, sadness and joy, break-ups, things to remember, lists, leisure-time activities, resolutions, and advice to the needy. Some are hilarious, others are extremely poignant; some raunchy, others sweet. Some of the notes are presented as quick asides or comments on the action; others get big musical production numbers. As Davy says about the letters in the magazine, it is all “raw and honest. You hear, or see one, and you think, ‘oh my god, that was me’ or ‘that is me’ or sometimes ‘thank god that’s not me.'”

With a cast of characters as large as this one, it might be possible to have trouble following who is who. However, there is absolutely no trouble here with the actors’ incisive performances. Blaemire’s Davy is both endearing and complex. Barrett Wilbert Weed (Drama Desk and Lucille Lortel Award nominated for the heroine of Heathers) is a stalwart and unshakable advocate for their original mission. Daniel Everidge (Drama Desk and Lucille Lortel Award nominated for the autistic young man in Falling) is a scruffy, stoner sidekick Mickey D. As the would-be L.A. producer Kate, Betsy Morgan has all the qualities of the ambitious executive type for whom success is everything even if it means selling one’s integrity. 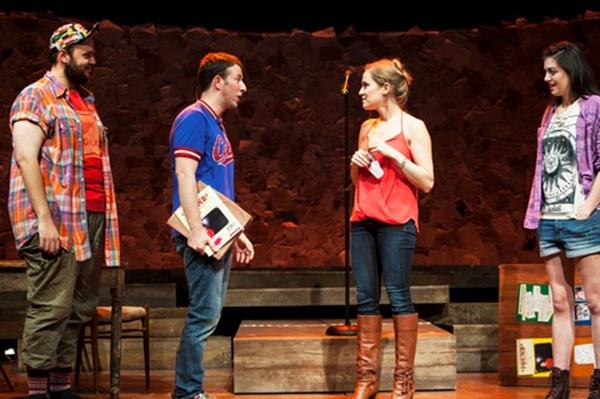 Aside from Overtree’s creative staging, he has the actors verbalize the various letters totally in the character of the writers. The supporting cast played by Christina Anthony (alumna of The Second City), Andrew Call (from the casts of five Broadway musicals), Orville Mendoza (late of Peter and the Starcatcher), cabaret artist Molly Pope, Danny Pudi (currently on the Yahoo! Comedy series, Submissions) and playwright/actress Sandy Rustin are terrific at playing so many different writers of the letters that it is hard to keep track of them. While all are memorable, of particular note are Anthony who runs the gamut from heartbroken teen to high-powered Hollywood TV exec and Call who plays a series of droll testosterone-fueled males.

David Korins’ witty unit set is papered with letters on different colored paper and gives the show an environmental feel. Actual notes read out loud appear on the walls of the set in Darrel Maloney’s complementary projections. The costumes by Theresa Squire have a believably contemporary lived-in look and could have come out of the cast’s own closets. Justin Townsend’s lighting varies appropriately for the different sequences and locales of the story. Music director Matt Castle at the keyboard conducts the excellent six-piece band.

Found is a very special musical, at one and the same time, wise, funny, rough, and innovative. Its score introduces a new talent in composer-lyricist Eli Bolin and offers its cast a great many juicy opportunities. Found will stay with you long after other shows have been lost to the memory scrapyard. You will also never feel the same way about letters or notes, either lost or found!