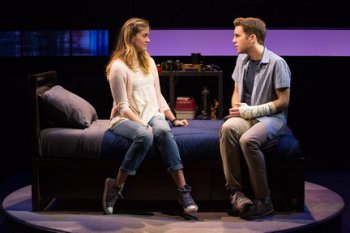 Dear Evan Hansen is about, and also exploits, modern technology and its power to change lives—rapidly and irreversibly.  Despite the veneer of cutting edge jargon—abetted by Peter Nigrini’s ceaseless projections of texts, emails, tweets and videos on to David Korins’ hanging paneled set—Hansen is fundamentally just the story of a young outsider and his need to fill an emotional void.

Written with superb insight by Steven Levenson supported by equally expressive songs by Benj Pasek and Justin Paul, Dear Evan Hansen finds its beleaguered title character (played by Ben Platt) worrying about a letter his therapist asked him to write himself as a way of expressing his feelings.  Gently egged on by his divorced, over-worked mom, Heidi (Rachel Bay Jones, turning a dreary role into gold) who cannot give Evan the quality time he needs, he does, indeed, write and print out this letter to show the therapist.

En route to school he is shoved to the ground by pathologically malcontented Connor Murphy (Mike Faist, slender in body but huge in emotional richness) who grabs the letter.   When the troubled Connor later takes his own life, the “Dear Evan Hansen” note is misinterpreted as a suicide message addressed to his “best friend,” Evan.

The web of lies that engulfs Evan, his friends and Connor’s family takes shape with mind-blowing inevitability.  Alana Beck (Kristolyn Lloyd), a schoolmate with an uncannily organized mind, runs the story of the Evan/Connor friendship online and it goes viral, making a hero out of Evan and a saint of Connor.  It gets so far out of hand that an old, unused orchard where Connor and Evan supposedly communed is slated to be transformed into a living memorial. 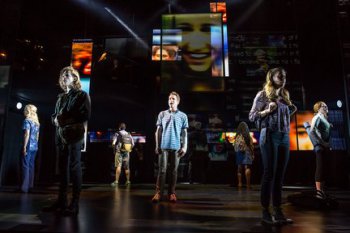 All of the characters have their own agendas which drags them along in the subsequent online hysteria.  Evan begins to enjoy the fame and the contact he has with Connor’s sister, Zoe (Laura Dreyfuss, working wonders with Zoe’s contradictions). Zoe at first doubts the entire Evan/Connor thing and takes a while to be won over.

Connor’s brokenhearted mother, Heidi (a movingly complex performance by Jennifer Laura Thompson), and to a lesser extent his father, Larry (John Dossett, tasked with hiding his emotions), treasure the comfort they get from the feeling that their deceased son still has a presence, spiritual or otherwise in their lives.

Evan’s best buddy, Jared (Will Roland, brightly amusing), consorts with Evan to provide a phony email correspondence history that “proves” to the world—but mostly to Connor’s emotionally destroyed mother—that the two teens meant the world to each other.

The way Mr. Levenson keeps things moving is both clever and exhausting.   The songs mostly explore the inner emotional lives of the characters:  “Waving through a Window” (Evan’s feelings of alienation); “Anyone Have a Map?” (frustrations of the two moms); “To Break in a Glove” (Larry Murphy’s heartbreaking song of unfulfilled paternal rituals); and the heartbreak and promise of “For Forever” which ends the show. 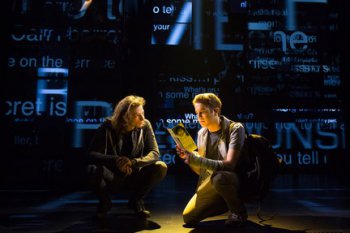 This is the kind of plot that once was handled with wit and panache by filmmakers like Preston Sturges, stories in which a sad sack loner is swept along on an ever- widening, out-of-control river of lies, innuendos and passions.

Although there is humor in Dear Evan Hansen, particularly in the goofy/smart lines of Evan’s best friends, Jared (brilliantly portrayed by Mr. Roland) and Alana (somehow both annoying and charming as played by Ms. Lloyd), it’s the ever-expanding angst that registers most strongly leading to the potent, tear-your-guts-out ending.

Mr. Platt, after having sung a number of demanding songs, somehow turns himself inside out with “Words Fail.”  His performance is the backbone of Dear Evan Hansen and it’s a strong, but flexible backbone, worth a visit to the Second Stage Theatre.

The choreography of Danny Mefford was well integrated into the libretto and songs.  Director Michael Greif (Next to Normal, If/Then) was in total control of what might have been a chaotic show.  He kept the energy of the cast contained, letting it explode when it had to.  Quite a feat.