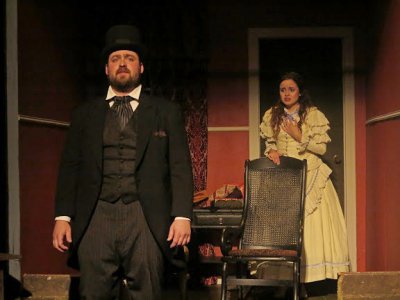 Michael Hurst as Henchard and Katarina Lugo as Elizabeth-Jane in a scene from “Casterbridge” (Photo credit: Rosalie Baijer)

In recent years, there have been many Off Broadway attempts to musicalize the works of Thomas Hardy. The latest is composer Christopher Beste and writer David Willinger’s ambitious, Casterbridge, a very engrossing version of Hardy’s novel The Mayor of Casterbridge. While some of the lovely music proves to be too difficult for some of the singers, under the direction of Willinger with musical director Bob Goldstone at the piano, the almost all sung-through stage version is an impressive and faithful retelling of the Hardy story.

Willinger’s book and lyrics remain very close to the original except for a new and more compact ending. In 1860, journeyman hay-baler Michael Henchard, wife Susan and baby Elizabeth-Jane arrive at the fair at Weydon Priors, in the south of England. Getting roaring drunk, he auctions off his wife and child, and Susan, sick of her poor treatment, goes off with Captain Newson. When Henchard wakes up the next morning, he is unable to find his family, and makes a vow not to take a drink for 20 years. In the interim, through sheer will power, he becomes a successful businessman and ultimately the mayor of nearby Casterbridge, remaining single all this time.

Twenty years later, Captain Newson is lost at sea and Susan, newly widow, returns to Casterbridge to find a better life for her daughter now a young woman. On the very day that Henchard hires the remarkable manager Donald Farfrae, from far off Scotland, he and Susan are reunited and he offers to court her and marry her so that Elizabeth-Jane will never know their secret. 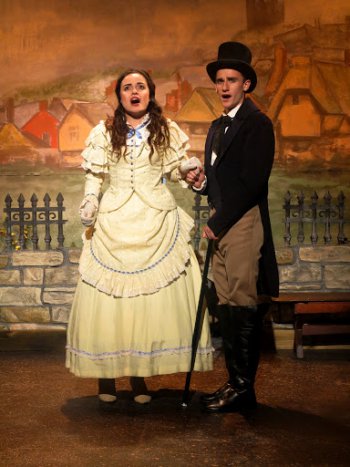 Katarina Lugo as Elizabeth-Jane and Sean Michael Beck as Donald Farfrae in a scene from “Casterbridge” (Photo credit: Rosalie Baijer)

However, Hardy believed in a pessimistic view of the world filled with life’s little ironies. Just at the point that Susan returns, Henchard was about to become engaged to Lucetta Templeman, a woman whom he had met on the Isle of Guernsey. When Lucetta comes to Casterbridge, she befriends Elizabeth-Jane and romances Farfrae, who was just about to propose to his boss’ daughter. Henchard’s temper again gets the better of him and tragedy once again raises its ugly head.

Taking as its model a pop-opera like Les Miserables, Casterbridge features 42 songs with only occasional dialogue. Various characters are used as narrators to help tell the story just as Hardy did in the novel. Although the music is quite beautiful, the problem with the show in its current form is that the songs mainly tell the story but do not convey emotion. As a result the audience does not stop the show with applause nor are any of the utilitarian musical numbers showstoppers in themselves. However, the characterizations are so fine that under Willinger’s subtle direction, Casterbridge works on the level of the twists and turns of its compelling story. 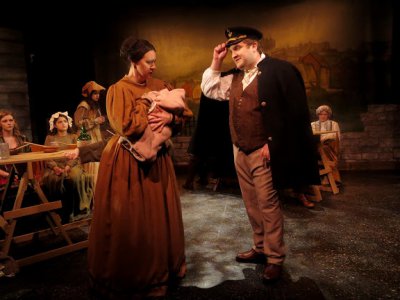 Emily Stine as Susan Henchard and John Wiethorn as Captain Newson in a scene from “Casterbridge” (Photo credit: Rosalie Baijer)

The cast of 16 play 33 characters and there is never a problem keeping them straight. As Henchard who goes from failure to success and back to failure again, Michael Hurst gives a raw but bigger than life performance that is quite convincing. As his daughter Elizabeth-Jane, Katarina Lugo, a lyric soprano, is quite nuanced as the refined, well-bred young lady who will lose her chance at love rather than appear forward.

Emily Stine has the difficult role of Susan, being asked to play her as both a young woman and as her older self 20 years later after many hardships, and she is quite appealing. As the catalyst Donald Farfrae who takes the townspeople’s affections away from Henchard, Sean Michael Beck is a bit callow, making him more naïve and inexperienced than he ought to be as this necessarily charismatic character. Used alternately as narrators, at times almost a Greek chorus, John Wiethorn, Juan Villegas and Rachel Foote Baccus are quite effective. While Pei-Wen Huang-Shea’s many costumes for the large cast are generally attractive and appropriate, she sabotages Ayanna Williams’ lovely performance as Lucetta by putting her in a showy gown that of a woman of refinement and means would never stoop to wear.

As director, Willinger does wonders with the staging of this complex story using Mark Marcante’s clever setting which allows for exteriors to be turned around and become parlors and bedrooms. His crowd scenes which often involve most of the cast are particularly realistic. The backdrop of the town and the surrounding area painted by Mary Blanchard makes for a very successful view of Hardy’s Wessex. With all its flaws, Casterbridge is an entertaining and absorbing evening in the theater. Like a nineteenth century novel meant for reading, Casterbridge the musical makes you want to know what will transpire next.

Theater for the New City, 155 First Avenue, between 9th and 10th Street, in Manhattan